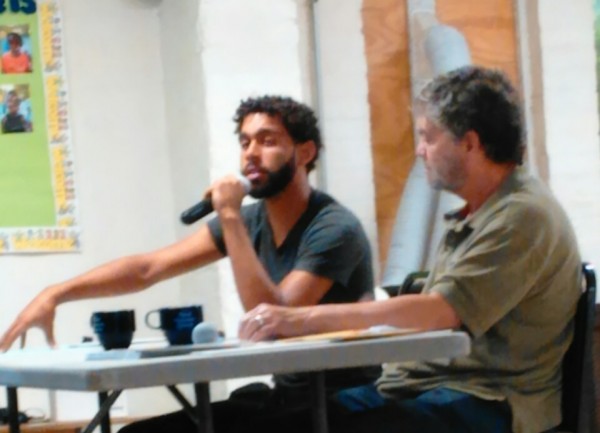 For a certain generation, Robeson is remembered as a charismatic singer, actor and activist who spoke out against racism throughout much of his 77 years. Born in 1898, Robeson, a New Jersey native, was also a stellar college football player for Rutgers University.

To younger generations, however, his name might be lost in memory but not his legacy, said Brenetta Howell Barrett, a church member who attended last weekend’s discussion.

Barrett is a respected community and civil rights activists herself in Chicago. She recalled first seeing Robeson speak at DuSable High School, when she was a freshman in high school.

“The thing that impressed me had not only to do with his versatility and the many languages he spoke and performed, but there was something very real about his standards for excellence,” Barrett said, adding that Robeson became the “icon” whom inspired her in life.

As she and a dozen or so other attendees talked about Robeson and related current issues of the day, the icon himself looked on literally.

A picture of Robeson hung on a wall in the basement rec room of Third Unitarian Church. The large, framed sketch drawing captured the entertainer’s face smiling over the audience and speakers Mark Rogovin and Jason Ware.

Rogovin, a Chicago muralist and activist himself, co-authored the book Paul Robeson Rediscovered: An Annotated Listing of his Chicago History from 1921 to 1958. Published in 2000, the book, written with Joe Powers Sr., was a four-year research effort timed to commemorate Robeson’s 100th birthday.

“Nobody knew his history in the city of Chicago,” Rogovin said.

Some in Chicago’s civil rights community were certain of Robeson’s time in Chicago, but none could pinpoint a date or activity, Rogovin said. Among the few who: Chicago historian Timuel Black, who remembered as a grammar schooler seeing Robeson perform at Chicago’s auditorium Theater in the late 1920s.

“We knew Paul Robeson from his being in New York City, London, East Berlin, Moscow, but there was nobody who really had a sense that he was here in Chicago,” Rogovin said, who also discovered that Robeson played in a pro football game as a member of the Akron Pros on the South Side as early as 1921.

Robeson also performed before thousands in Grant Park in 1940 in a musical show, Rogovin said.

Robeson, a star of stage and screen, would also speak out against racism in the entertainment industry and greater society. He would come under scrutiny by the FBI and Congress for his outspoken views, including his support for the anti-lynching petition called “We Charge Genocide” that he presented to the United Nations in 1951.

Despite being blacklisted in Hollywood for his political and social views, Robeson continued to perform until the 1960s when he began facing health problems. He retired in the mid-’60s and died Jan. 23, 1976, from complications of a stroke.

Born in Princeton, New Jersey, to a minister father and Quaker mother, Robeson was one of five children – four boys and a girl. He played defensive tackle and end in college but also sang in the glee club, among other campus activities. He left football in 1922 and turned to acting, performing in theater and later in film beginning in the 1930s.

His celebrated works include the Eugene O’Neill play The Emperor Jones, which later starred Robeson in the 1933 film version. Known for his deep and distinct bass voice, Robeson’s stage performance as Shakespeare’s Othello is also highly regarded among fans and historians.

It was Robeson’s “intense” stage presence that greatly affected Barrett as a 12-year-old freshman.

Barrett recalled seeing him again in her later teens performing on stage in Chicago and later while attending a reception for him held in the city. Barrett said she sees him in today’s youth.

“I think there are still many lessons to be learned,” she said. “I do see the kind of courage and persistence that Paul Robeson demonstrated being played out in today’s activism of our youth, who are literally putting themselves on the line.”