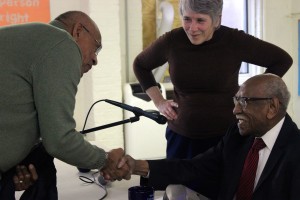 “He was not afraid of anything.”

“And it made you ashamed to act like you were afraid of anything if you were with him,” the 96-year-old Black said during services Sunday at Third Unitarian Church, 301 N. Mayfield Ave.

Black, along with several other local activists, assisted King in organizing Chicagoans for the March on Washington in August 1963 when he delivered his famous “I Have A Dream” speech in front of the Lincoln Memorial.

“He could articulate in understandable but also spiritual tones why we should be going forward,” Black said.

“That spirituality was something that was inspirational.”

As the grandson of slaves, Black was steeped in the Civil Rights movement of the 1950’s and 1960’s. He also worked alongside other prominent figures, including activist and entertainer Paul Robeson and Chicago’s first black mayor, Harold Washington.

Black taught for Chicago Public Schools and served in the U.S. Army during the World War II during times of intense segregation in America.

It was evident that King worked tirelessly in his efforts to bring about change, Black said, and adopting the non-violent approach King encouraged was something Black and others from the North struggled with.

“We had to be trained to be non-violent,” Black said. “Being from the North, generally we were not non-violent. But because of respect for Dr. King, we obeyed.”

Aggression toward racist whites in the South could result in immediate retaliation. Groups like the Ku Klux Klan were heavily concentrated in the South, and blacks were lynched for any reason.

“With most of us from the North, it was a tactic,” Black said, as he recalled one particular time King visited Chicago and tensions between black and white escalated.

“When he came here to Marquette Park, they knocked him down and were burning things and cars,” Black said. “I said to myself, ‘If one of them hits me, the non-violent movement is over.’”

The crowd responded with laughter to Black’s story as he went on to describe more of King’s character as a leader.

“Dr. King was a leader, and I mean that in every way that you can describe it,” he said.

“Part of that leadership that you felt (was) his availability,” he said. “Regardless of what time of the day or night, all you had to do was call Doc up, and he’d be there.”

Barrett organized trains going from Chicago’s Union Station to Washington, D.C., for the 1963 march, she said; those trains were packed with participants.

“As I remember, there were benches in the restroom areas on the train where people would sit, and some people had to sit or lie on the floor,” she said. “But it was a very exhilarating kind of experience.”

Barrett, who raised four children during this important time in history, also recalled how personable King was.

“Doctor King, as Tim said, was accessible,” Barrett said. “I can remember a very small meeting that he had with a group of us on the campus of George Williams College in Lake Geneva. It was a retreat that he wanted to have with some civil rights activists.”

“The reason I remembered that so well was because they had no hot water, and you couldn’t shower because the water was so cold,” she said with a laugh.

But what was most memorable about this time, Barrett said, was that King was a listener, and that was important.

During Sunday’s talk, Black recalled moments he spent with King before his assassination in April 1968 outside the Lorraine Motel in Memphis, Tennessee.

Audience members asked about more recent events, including shootings and killings by police in Chicago.

“The educators and the ministers have not been as involved in helping the young people think about things in the community,” Black said. “ And we don’t have that level of communication that existed (during the Civil Rights era).”

Was there any time during the movement that he gave up hope? No, Black said.

And he still hasn’t given up hope, he said.

“I felt there would be a delay, but I never lost hope that the change was going to come,” Black said.

“That’s one of the reasons I’m here, to carry forward the hope that gives you the belief that change is going to come and to demand that you participate in the quality of that change.”