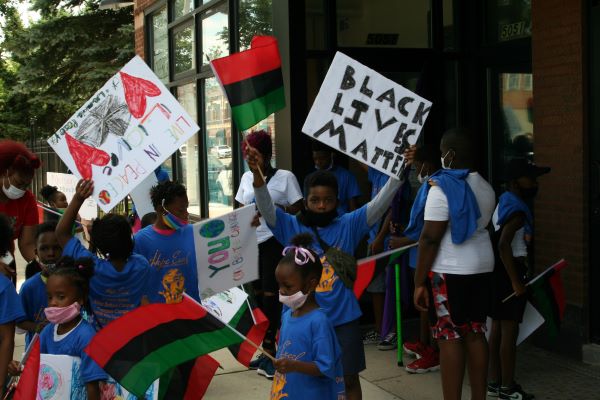 Dozens gathered at the Westside Health Authority Friday for a march to celebrate Nelson Mandela day and call for the development of Chicago Avenue as the Soul City Corridor.

They marched down Chicago Avenue, from Leclaire to Cicero avenues, and held a rally outside the Austin Health Center before returning to the Westside Health Authority.

The section of Cicero between Roosevelt Road and Grand Avenue was renamed Mandela Road in 2014.

The police department announced last week that district’s previous commander, Yolanda Talley, was being promoted to deputy chief of Area 1, with Commander Wines replacing her in the 15th District.

Wines is a 27-year veteran of the department, having served mostly on the South Side. Friday was her second day working in Austin.

The Rev. Ira Acree of Greater St. John Bible Church said he had to be at Friday’s event to champion the cause of economic empowerment for African Americans in Austin and on the West Side.

He said there has been massive divestment from the West Side; businesses began leaving in the 70s and 80s, and mental health offices and schools that served the West Side have closed.

Acree said apartheid was the tie in with Nelson Mandela, South Africa’s first Black and first democratically elected president who played a crucial role in ending apartheid. He died in 2013.

“We feel that we have been victimized by a system that has done apartheid here in Chicago, specifically on the West Side,” Acree said.

Mandela Day commemorates the Nobel Peace Prize winner’s birthday: July 18, 1918. He would have been 102 on Saturday.