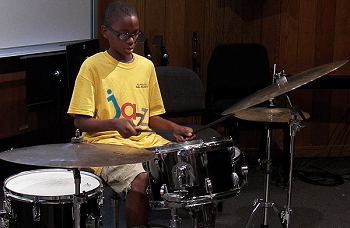 July 27 marked the end of the program with a finale concert including live jazz music from all 150 academy students.

The students met at UIC’s department of theater and music for two weeks developing skills and knowledge about music.

Sylvannah Batchelor, a sixth grader at Horatio May Community Academy, said the best part of the program is when they have special guests. She said she liked the Chicago Catz most.

“Everyone got to come down and dance,” Sylvannah said.

Sylvannah, who’s played saxophone for two years, said she learned how to use improvisation and learned new notes while in the program.

She said she loves playing saxophone because of the way it sounds. 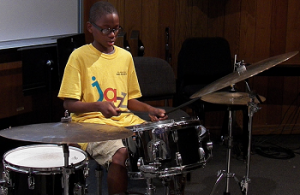 “They had everyone standing up and dancing and stuff, and the music was good,” he said.

The Chicago Jazz Philharmonic/UIC Jazz Academy aims to make children in underserved communities become interested in pursing higher education and preserve the jazz genre for the next generation. The academy was also created to address the lack of sustained music education in the public school system.

Alexis Hiraldo, who attended May but is going to be a freshman in high school this fall, plays the drums. At camp she said she enjoyed learning new notes and being loud, because she doesn’t have a drum kit at home.

“I really liked the jam session,” Hiraldo said. “They have everyone come and bring their instruments, and everyone jams out right before we go home.”

Northwest Middle School sixth grader Christopher Sanchez has played the drums for the past 10 years.

He said he enjoys drums because “you can feel the music and dance to it.”

Click here to view a short video about the program.

Here are the other participating Austin students: