More than 20 students from

The lunch of mac-and-cheese, green beans and fried chicken at Alice’s, located at 5838 W. Chicago Ave., was the student’s chance to show off their new skills while also having fun with classmates.

“I learned that you can’t put your elbows on the tables or chew with your mouth open,” said Tajiuna Cooper, a second-grader. 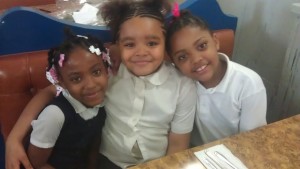 Kenneisha Neal, also a second-grader who sat across from Cooper at the restaurant, chimed in: “That would be really rude.”

Before lunch was served, Washington asked the students why it’s important to eat vegetables.

One student shouted out, “Because they make you grow.”

Another said, “Because they’re tasty.”

And a third said, “So you won’t get diabetes.”

Since the main dish was fried chicken, Washington told the students it’s OK  to not use a fork this time, but “don’t lick your fingers,” she added.

The students learned in their previous classes to put napkins on their laps, which utensil to use while eating and to push their chairs in after leaving the table, among other dining rules.

The boys and girls filed in a line and picked up their plates of food with a polite “thank you” to the server. “They gave us good manners like not to blow bubbles in our drink and to always eat your vegetables because they make you healthy,” said second-grader Amaiya Marshall, who added her favorite vegetables are beans. 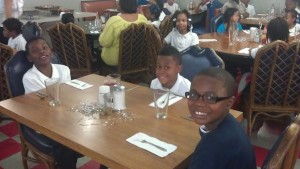 After lunch, students had a bowl of fresh-made apple cobbler and received their certificates of completion.

Community member Roman Marrow was the originator of the school’s etiquette class.

Marrow said that without the support of Leland’s principal, assistant principal and local school council, the class wouldn’t have happened. Marrow also extended his thanks to Washington, who is the “epitome of professionalism.”

He said he’d be remiss if he didn’t credit Sharon Troupe from the Urban Partnership Bank for introducing him to Washington. “It was because of her that we got it off and running,” he said.

Washington said she’s glad to see the students have retained the information from the course.

“They will use these skills forever,” Washington said.

The parents were also excited about the course, because it’s something “very different,” Marrow said.

“Some people get excited, but it’s education,” he said.

He said etiquette classes have been around for ages, but he wants to see this class continue at Leland for years to come.