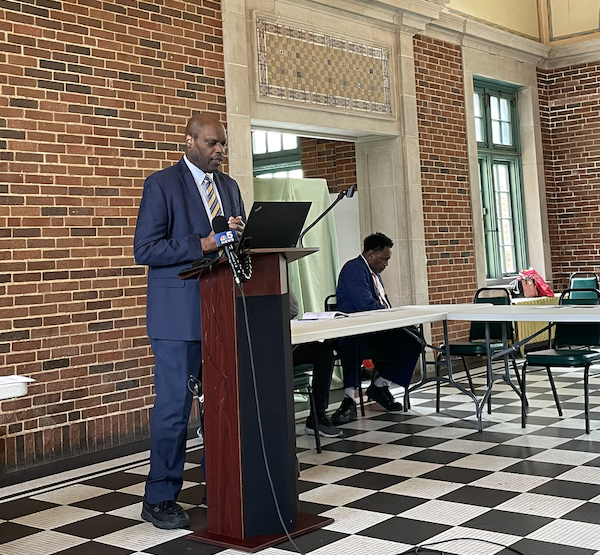 David Cherry, president of the Leaders Network, talks to members at the group's monthly meeting.

A credit union in Austin may be running yet this year if conversations with potential mentors continue to succeed, former community development banker Michelle Collins said last week at a meeting of West Side faith leaders.

“There are a couple of credit unions that are very interested in working with the Leaders Network,” Collins said. “We are meeting with them. If this happens, we can have something up and running – in terms of the Leader’s Network credit union – on the West Side of Chicago within six months.”

Collins said the advisory board is looking to partner with a larger credit union already operating that can serve as a mentor for the Leaders Network credit union. This would help start operations of the credit union “in less time, at less cost” than starting from scratch.

The names of the credit unions that could partner with the Leaders Network were not disclosed because no formal agreement has been reached. But Collins said the planned discussions will “provide us insights and lessons learned, of what went well and what could have gone better, if handled differently.”

Rev. Marshall Hatch, senior pastor of New Mt. Pilgrim Baptist Church, said one of the credit unions that could be a partner shares the same vision and has $1 billion in assets. “That means our community will have best-class services from Day One.”

Collins also shared the results of the online community survey carried out in March in which 525 people participated, with 48% of the participants being residents of Austin or Oak Park.

“The work of this organization to bring banking to this community, this is to fix the system,” he said.

Edgerton recently made headlines after he announced his congregation – the First United Church of Oak Park – would be “fasting from whiteness” during lent.

During his speech to Leader’s Network members, he addressed the structural racism of the church and the banking industry, recalling the life of Jesse Binga, Chicago’s first black bank owner.

“It’s structural, it has to do with how things were built,” Edgerton said. “You can read it. It’s in the history books.”

Also during the meeting, Tom Alcazar, founder of EATS Groceries, said plans to open a grocery store in Austin have been presented at several ward meetings while EATS Groceries awaits approval of a city grant.

“If we get the approvals that we’re promised, we’ll break ground in 30 days,” he said.

Alcazar said supermarkets have left Austin because they are not profitable; it is “not black and white, it’s green.” EATS Groceries does things differently, he said – providing transportation to residents within a one-mile radius, child care for employees and a teen entrepreneurship program, among other programs that would benefit the community.

“If you’re in Austin, you’re likely to die 18 years younger than the other ZIP codes in Chicago,” Alcazar said. “Something is wrong with that, and I think if you let us do some revitalization, we’ll change it.”

In other news, Jonathan Jackson, running for the 1st District Congressional seat being vacated by retiring Congressman Bobby Rush, also attended last week’s meeting. Jackson, a son of Rev. Jesse Jackson, talked about what he would advocate for if he wins the June 28th primary and the November general election.

Among other topics, he highlighted the link between public transportation and welfare, saying “transportation is a bigger predictor of future success than what you eat.” Jackson, a Whitney Young High School alumnus, said he wants to “open up” more transportation lines on the West Side.

Jackson had previously been endorsed by Congressman Danny K. Davis (7th), who is running for re-election in next month’s primary against candidate Kina Collins. Members of the Leaders Network have not endorsed either candidate in that contest.