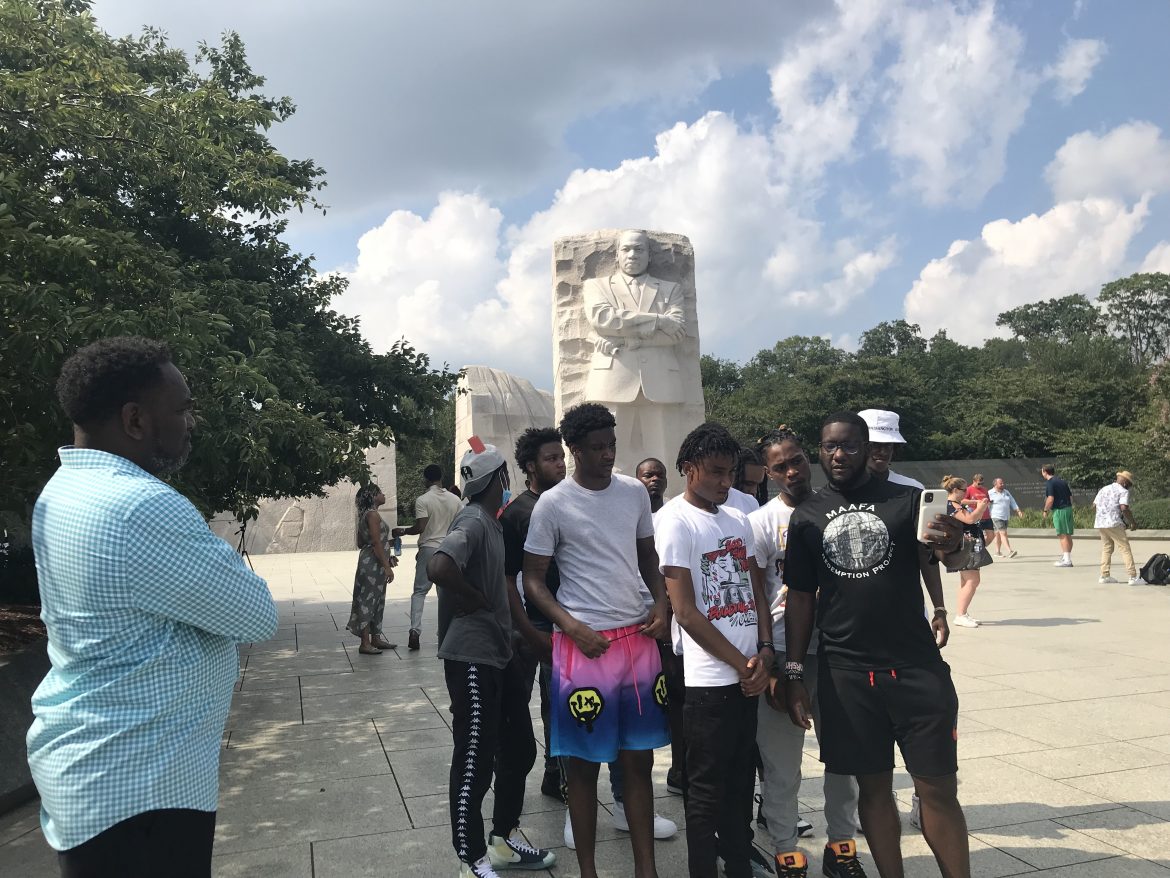 Amonta Lewis learned about the challenges voters face in other states when going to the polls.

The 20-year-old Austin resident also learned more about slavery, facts he wished he had been exposed to while back in school.

“We have a lot of successful brothers and sisters,” but we are limited in what we see, Lewis said as he stood near the Martin Luther King Jr. Memorial in Washington, D.C., Saturday.

He and nine other young men from the West Side were in the nation’s capitol to participate in the national voting rights march and rally. They also visited the National Museum of African American History & Culture and Howard University – a school Lewis is interested in attending.

Attending the rally alongside thousands of others marking the 58th anniversary of the historic March on Washington was “mind-blowing,” he said. “There were so many passionate people.”

One thought echoing in his mind after hearing the speakers, who included the younger brother of the late Congressman John Lewis: “You need to be involved in, even if you don’t feel like your voice really matters.”

The men – ranging in age from 18 to 26 – drove to D.C. with Rev. Marshall Hatch Jr., executive director of the MAAFA Redemption Project, a faith-based residential institute in West Garfield Park for young men of color.

“This was vital for us to be here,” Hatch Jr. said. “It’s a profound way to commemorate Dr. King’s movement and continue his legacy and work” – and to underscore the importance of voting and Black political power.

The trip was also a chance for some of the men to not have to worry about looking over their shoulder and allows them “to experience a new space.”

Rev. Ira Acree, pastor of Greater St John Bible Church, made the trip because he doesn’t want progress on voting rights to be reversed.

“It’s a disgrace that we’re still fighting for voters’ rights,” said Acree, co-chairman of the Leaders Network. “If we don’t use our voices, we have a radical right-wing contingency of the Republican Party that will set us back 60 years.”

David Cherry, president of Leaders Network and head of Chicago’s All Star Project, said although Illinois’ voting laws aren’t under attack, what happens in other states affects Chicagoans. Just look at the last election and what has happened since then.

“You have elected officials in all of these states who are putting in voter suppression laws that make it harder for Black people and Latinx to vote. The federal government has a responsibility to stop in and say, ‘We’re not going to stand for this.’”

Cherry said his mom, who was born in Alabama, and his father, who was born in South Carolina, never voted in their home states because of voter suppression and intimidation. They didn’t feel safe voting until they lived in New York.

“It was just open terrorism,” he said. “But what is happening today – instead of dogs and water hoses – they’re engaging in voting suppression using a stroke of a pen.”

Acree and Cherry said it’s imperative the U.S. Senate take up the John Lewis Voter Rights Act, which was narrowly approved last week by the U.S. House of Representatives.

“We want the federal legislation,” Acree said. “We want to send a message to the Senate, ‘Don’t come home until you pass this legislation.’”

Voting access must be secured for everyone, which will then pave the way for progress on other issues like health care and jobs, Acree said.