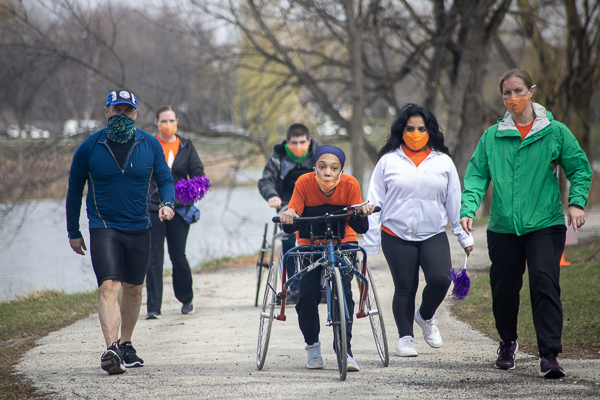 Larke Johnson was one of many who participated in a run in Austin last weekend.

About a dozen Chicago Public Schools students from around the city lined up at Columbus Park last weekend for Chicago Run’s first in-person race since the pandemic started.

Crystal Lein, Chicago Run program director, said the timing lined up perfectly with the end of their winter season. For some participants it was the first public and in-person race in a year.

Saturday’s race, which included 5k and 1-mile courses, was organized in partnership with the Chicago Area Runners Association (CARA) and the Chicago Park District as part of their ‘Go Run series. The program brings races, which are free for participants, to a different city park each week.

“We feel comfortable and confident that we are not the pilot group that they’re testing this on,” Lein said of the event’s safety. CARA started holding races again over the summer and had already put a lot of safety measures in place, she said.

The West Side isn’t necessarily where people would expect a 5k to be held, said Greg Hipp, CARA’s executive director. “And that’s exactly why we’re here.”

He said by expanding events, like Saturday’s race, beyond Grant Park and the North Side CARA is using running as a tool to build community and promote healthy lifestyles throughout Chicago.

Hipp said for many people the big barrier for getting into running isn’t cost, it’s geography. CARA is bringing ‘Go Run events to communities like Austin because, “people want to be able to do it in their neighborhood parks where they can get to, with other people they identify with.

“Our goal is to, over time, make sure wherever you live in Chicago, you can find a group to run with,” Hipp said.

CARA also started the Austin Running Crew this past fall, he said. They meet 5 p.m. every Thursday at La Follette Park track.

The 17-year-old completed the mile course using a race runner, a type of assisted running frame.

Being part of Chicago Run has increased her mobility and the strength in her legs, she said. “It makes me feel normal, like a normal kid who’s on a track team.”

As a junior coach for Chicago Run, she gets “to mentor kids with disabilities and show them the impact that running can have on them,” Larke said.

Meeting students where they are is a big part of Chicago Run’s goal, Lein said.

While running is a team sport, “it’s also an individualized sport,” she said.

“You’re not getting called out for letting your team down. You get to start, here’s where you’re at and here’s how you’re making progress for yourself.”

Chicago Run tries to get more than just the athletes on a school’s track team involved; some students will run close to the front of the pack while others will walk most of the race, said Lauren Shirk, communications director for Chicago Run.

What’s really important is “goal setting and crossing that finish line, whether that is just on your own or with your coach or your teammate,” she said.

As previously reported by AustinTalks in 2019, Chicago Run operated 57 sites in 36 neighborhoods with a focus on CPS schools, including Lewis School of Excellence – which Shirk said was one of their longest running partnerships.

In a normal year, they would reach upwards of 16,000 students, she said.

Over the next couple of years Chicago Run is hoping to begin focusing more closely on a smaller number of communities, like Austin, that have historically been marginalized in Chicago, Lein said.

Physical activity “can really help with coping with and alleviating trauma.” While they recognize trauma happens throughout the city, “we know that it happens more often in marginalized communities,” she said.

Chicago Run wants to be able to provide more opportunities for those communities to use physical activity, not only for the physical benefits, “but also the mental and emotional benefits that sport brings,” Lein said.