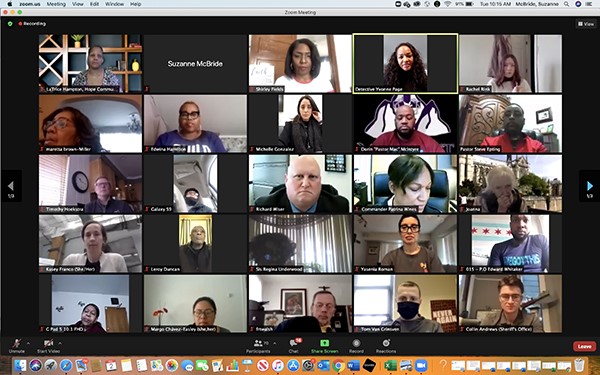 The Chicago Police Department wants to improve the long-strained relationship between detectives assigned to solve the city’s deadliest crimes and family members whose loved ones have been killed.

“This is something we have to do together,” said Richard Wiser, commander of the Area Four Detective Division, which includes Austin. “We need to be a part of the community.”

Speaking at the monthly meeting of the 15th Police District’s faith-based leaders, Wiser acknowledged that detectives have at times been insensitive in dealing with the families of murder victims and pledged the department would do better.

Wiser apologized for the insensitivity, adding police see tragic things happen on a daily basis and there can be a disconnect between what they see and their personal feelings. “It’s not that they don’t care. They care very much.”

He introduced two detectives, Yvonne Page and Michelle Gonzalez, whose primary role is to reach out to families on the West Side who’ve lost loved ones to violence.

Page, who’s worked for CPD for 25 years and been a detective the last year, said she’s experienced tragedy in her own family and can empathize with survivors. “I hope we can come together to make the West Side a better place.”

Gonzalez, who’s worked for CPD for 13 years, said she chose to come back to the West Side to work in this capacity. “I’m really excited about this role and trying to bridge this gap between the detective unit and the community.”

The lack of communication has been an issue with a number of Austin homicide cases.

AustinTalks recently reported on the case of Elijah Sims, a high school senior who was shot to death in August 2016.

Sims’ mother believes those responsible for her son’s death have not been brought to justice, though police have classified the case as “exceptionally cleared,” which means authorities have identified a suspect, but either the suspect is dead or prosecutors said there was not enough evidence to approve charges.

Some West Side residents continue to have a general distrust of police, community leaders say. That distrust was documented by AustinTalks in its 2013 “Forgotten Dead” series.

Wiser said the police department doesn’t have all the answers and asked attendees at Tuesday’s meeting for recommendations on how to mend and strengthen the department’s relationship with the community.

Pastor Steve Epting, senior pastor of Hope Community Church and leader of the 15th District faith-based group, said residents and police have to get to know each other. “We have to spend time with each other.”

Marshawn Feltus, a crisis response coordinator for BUILD Chicago, said there needs to be more communication between police and residents who report crimes but don’t know the resolution. “That’s a frustration when people can’t get a follow up.”

Feltus said he personally knows officers, but for those who don’t have those relationships, they need to be able to have someone to go to.