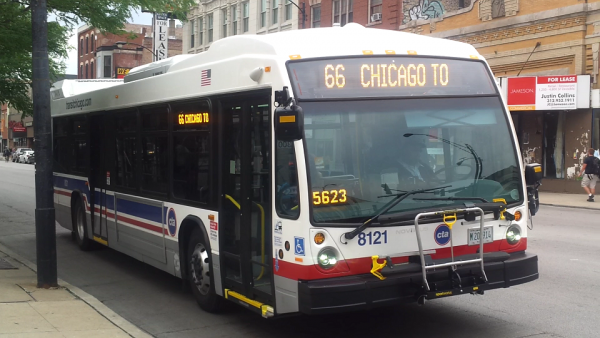 The Chicago Avenue (#66) bus is one of two routes that will have “pop-up essential” bus lanes, Mayor Lori E. Lightfoot announced Monday.

The temporary, dedicated lanes – the other will be the 79th Street route – will prioritize service for essential workers and other transit riders by
converting travel lanes in both directions to 24-hour dedicated bus
lanes.

City officials hope the lanes will help reduce bus delays and bus bunching,
which can lead to crowding and longer bus trips, both of which are
counter to the Chicago Transit Authority’s efforts to promote social distancing.

The temporary CTA bus lanes will be installed on 4.6 miles on Chicago Avenue, from Laramie to Ashland.

The CTA and Chicago Department of Transportation identified the Chicago Avenue and 79th Street routes for the initial program roll-out due to their high ridership and capacity to convert one of their two travel lanes to a bus-only lane.

The bus lanes will be demarcated with temporary striping and signs. Under the pilot project, right turns will be permitted at all intersections, and
current curbside access will be maintained. Parking, loading zones and
driveways will not be affected.

Creation of the dedicated bus lanes will begin in the coming weeks,
and the pilot is expected to be in effect for at least six months
while officials evaluate the impact on ridership, operations and the
evolving context of the COVID-19 public health crisis.

“CTA buses remain critical and reliable transit resources for
those — especially on our city’s South and West sides — who do not have
the luxury of being able to work from home,” Lightfoot said.

“This program is the first step to ensure our residents will continue
to have convenient access to public transportation throughout the
pandemic and after.”

Additional routes and route segments are being considered for inclusion in future phases of the project.