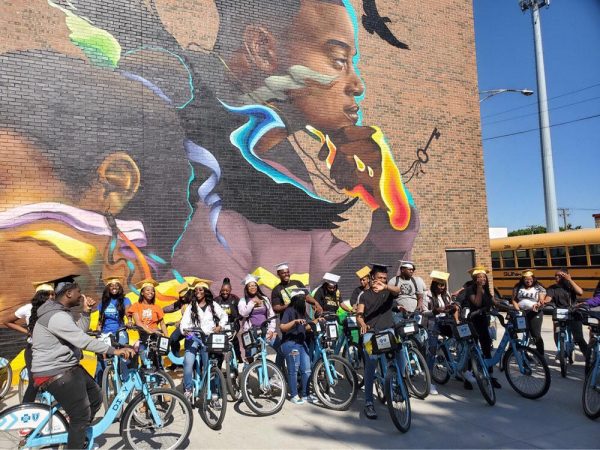 This is the second year Michele Clark has held a “grad ride” for its graduating seniors. Michele Clark Principal Charles Anderson said last year the school did a slow ride with BUILD Chicago and met with Divvy, who partnered with the school this year and donated 70 bikes for the event.

“We are showing the community that young black students succeed, too,” said Dejah Tillman, one of the graduating seniors who took part in last week’s ride.

Another participant, Sharai Freeman, said her favorite part was getting the chance to see the community and spend time with her classmates.

“It is an amazing opportunity, and I am glad the school offers it,” she said.

Anderson said one of the main reasons he wants to continue holding the event each year is to have his students and faculty see for themselves that their community is welcoming and safe.

“It is basically another graduation for them,” Anderson said. “It is an opportunity for the community as a whole to celebrate their accomplishment.”

The group bike ride began about 9:30 a.m. June 11 and continued through the community with police blocking traffic. When they arrived at each school, police sirens went off and students raced to the windows to see what the seniors were doing.

“I think it made the people at the schools nervous at first, but once they saw us they were overjoyed,” Principal Anderson said.

He said it’s important to build a bridge with all of the schools in Austin and to communicate with each other. While at the schools, the seniors had the chance to visit with their previous principals and teachers.

Freeman said when she was in elementary school, high school seniors seniors did not visit her school like this, and she’s glad she had the chance to give the younger kids that experience.

Freeman, who will be attending Western Illinois University to study nursing in the fall, said everyone at the schools they visited was excited to see the Michele Clark seniors and talk to them about what they will be doing after graduation.

“We got to take pictures and talk to all of the principals and show them that we made it,” Deja Lipscomb said.

Lipscomb said her participation in the event has given her the opportunity to influence kids.

Tillman agreed: “It was important to me to participate in the bike ride because we were able to show younger students and educators that we are doing good in our community and have a future.”

The grad ride ended with a cookout for the seniors and faculty back at Michele Clark.

“This is a testament to their success and work here at the school,” Anderson said. “They can now go forward and say they did it.”