After weeks of campaigning and early voting, the final push to select Chicago’s next mayor and elect a new city council is here. 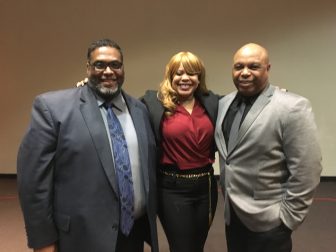 Ald. Chris Taliaferro (left) and challengers Zerlina A. Smith and Dwayne Truss discussed the issues facing the 29th Ward at a candidate forum earlier this year.

Voters in the 29th Ward have three aldermanic candidates to choose from: Ald. Chris Taliaferro, Dwayne Truss and Zerlina A. Smith.

If no one gets at least 50.1 percent of the vote, there will be a run-off April 2 between the top two vote getters. That’s what happened four years ago when Taliaferro, Smith and several other candidates challenged incumbent Ald. Deborah Graham. In all, eight candidates ran for 29th Ward seat in 2015.

Ultimately, Taliaferro, then a sergeant for the Chicago Police Department, defeated Graham in the April 2015 run-off.

The candidates completed questionnaires covering a number of issues, including education, public safety and gambling for the Chicago Tribune and for the Sun-Times (Taliaferro, Truss and Smith). They also appeared at a candidates’ forum earlier this month at Michele Clark High School that AustinTalks covered.

Additional information about the 29th Ward race can be found at Chi-Vote, a collaboration of nonpartisan media and civic organizations that includes the Better Government Association, Block Club Chicago, The Chicago Reporter, The Daily Line and The Triibe.

Voters also will be deciding who they want to replace Mayor Rahm Emanuel, who will be stepping down in May after serving two terms. Two of the 14 candidates – Austin Chamber of Commerce Amara Enyia and state Rep. La Shawn Ford – have strong ties to the West Side.