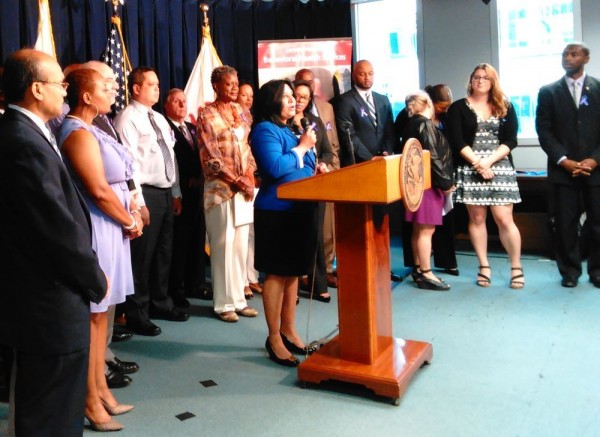 The West Side heroin crisis outlined in a new Roosevelt University study is devastating the community and its residents.

One out of four hospitalizations in the entire state for heroin and other opiates occurred on the West Side, according to “Hidden in Plain Sight: Heroin’s Impact on the West Side,” which was released Aug. 31.

The report, released last month, has put a spotlight on Chicago’s drug problem, one that residents know all too well.

“My mother has struggled with this issue, so it has impacted my life and my family,” said state Rep. La Shawn Ford at an Aug. 31 press conference at the Thompson Center.

Ford’s mother gave birth to him when she was teenager, leaving his grandmother to adopt and raise him. Ford, who grew up in the former Cabrini Green housing projects on the South Side, said drug addiction has been a lifelong struggle for his mother.

The South and West sides have been devastated by heroin use the most. The predominantly black communities have racked up more hospital stays, deaths and arrests than anywhere else in Illinois, according to the report.

The Roosevelt study’s data spans more than a decade, beginning in 2001. The report’s release coincided with the launch of the West Side Heroin Task Force, which includes hospitals, community nonprofits and health providers.

Jamelia Hand, a clinical therapist and addiction treatment specialist in Chicago, lost her father to a drug overdose in 2010.

Born to teenage parents, her dad’s drug addiction lasted from the time she was a child through her college years.

His struggle continued as she became an addiction specialist and drug abuse counselor, a career decision influenced by a daughter looking to “save” her father.

“Whenever you hear someone say I don’t know anyone like that or it could never happen to my child or my parent, understand that they can and in many cases they will,” she said.

Her dad’s addiction began with pain killers prescribed to him after he was shot, the victim of an attempted robbery. He would later become hooked on cocaine and heroin.

Hand remembers him experiencing and surviving a previous overdose.

“Overdose is an unbelievably traumatic experience, and if you can spare someone the pain of overdose, you should,” said Hand, who works in Chicago.

Chicago had 202 heroin-related deaths in 2014, an increase from 194 the previous year. Chicago’s overdose rate in 2014 accounted for 28 percent of deaths in the entire state.

Chelsea Laliberte, executive director of Live4Lali, a nonprofit drug education program based in Arlington Heights, lost a younger brother to heroin overdose in 2008.

Marianne Schiavone, who serves on West Suburban Medical Center’s Board of Directors, spoke of the death of her friend’s grandson a day before his 20th birthday.

“He had a five-year heroin addiction that began in high school. His parents, his brother and sister, and his grandparents – my friends – had worked so hard to save this boy and could not,” Schiavone said. “It’s devastating.”

Schiavone and other addiction survivors encourage everyone to work together to solve this overwhelming problem.

“I asked my friends if they wanted to come and speak. They said they’re not ready for that yet,” Schiavone said. “But we have to be ready for everyone else who’s been in that sad circumstance of addiction without help.”