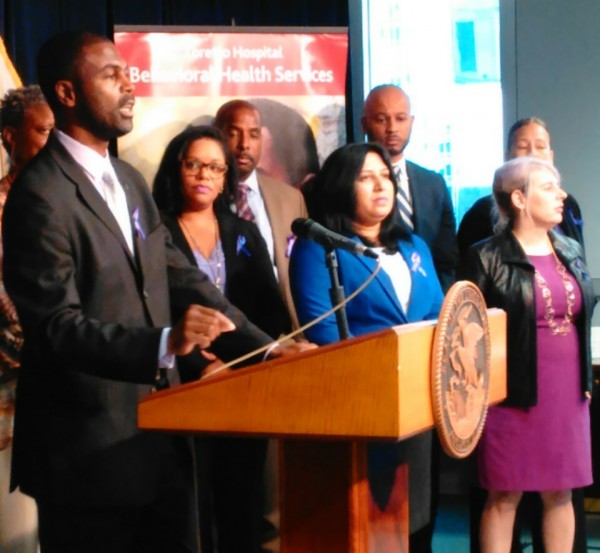 Chicago’s West Side has become the “epicenter” for heroin deaths and arrests in the state, according to a Roosevelt University report released last week.

Cook County accounted for more heroin-related deaths than any other part of the state in 2014, with black residents dying at a rate of 9 persons per 100,000 compared to 5.9 per 100,000 for whites, according to the study commissioned by the university.

Heroin deaths, arrests and hospitalizations are largely concentrated on the West and South sides, which comprise the largest black populations in Illinois.

Overdose deaths due to heroin versus other drugs also impact Chicago’s black and Latino populations disproportionately, the data shows. In 2014, heroin accounted for 57 percent of overdose deaths among blacks and 58 percent among Latinos. Among whites, it was 37 percent.

The report, titled “Hidden in Plain Sight: Heroin’s Impact on the West Side,” was released during a press conference at the James R. Thompson Center. A new task force to address the West Side heroin problem was also announced Wednesday.

“We talk about the guns and killings on the street, but if we really want to help the community and police, then we’ll do everything we can to stop the flow of drugs on the West Side of Chicago,” said Austin state Rep. La Shawn Ford, who spearheaded the West Side Heroin Task Force’s creation.

Austin’s Loretto Hospital and West Suburban Medical Center in Oak Park, which also serves Austin, are among the task force members, which include community nonprofits and health agencies.

Dr. Sonia Mehta, Loretto’s CEO and chief medical officer, said the hospital has seen an increase in heroin hospitalizations on the West Side.

“Some of these patients get re-admitted multiple times,” Mehta said. “That just tells you that treating them in the emergency room is not enough to deal with the crisis.”

The city overall saw a decrease in heroin arrests from 2010 to 2015, but the West Side actually saw an uptick in arrests for heroin possession. North Lawndale, East and West Garfield Park, and Humboldt Park had the highest arrest rates in the city, the report shows. 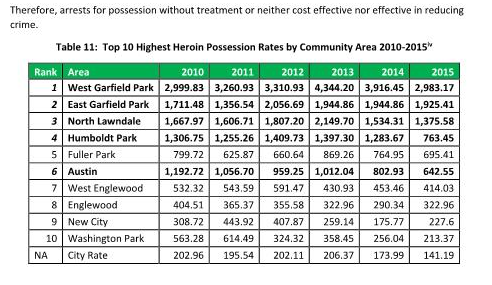 The report was released Aug. 31 – on International Overdose Awareness Day. The goal of the task force is to raise awareness about the West Side epidemic, Ford said.

The report’s policy recommendations include increasing the number of neighborhood treatment facilities, as well as providing more treatment for prison inmates addicted to heroin.

“Today, we’re going to urge the governor and my partners in Springfield to fund HB1 (House Bill 1),” said Ford, who sponsored the legislation.

The report also calls for reducing the charge for possessing small amounts of the drug from a felony to a misdemeanor.

“Imprisoning people with heroin disorders is neither cost effective nor as effective as treatment,” said Kathleen Kane-Willis, director of Illinois Consortium on Drug Policy at Roosevelt University and the report’s author.

Seventy-eight percent support the felony-to-misdemeanor change, according to a telephone poll of 800 Illinois residents conducted in December 2015.

“We need to rethink our drug penalties,” Kane-Willis said. “If this is ground zero, than we need to think about these solutions because it will save the state money and provide better treatment for everybody.”