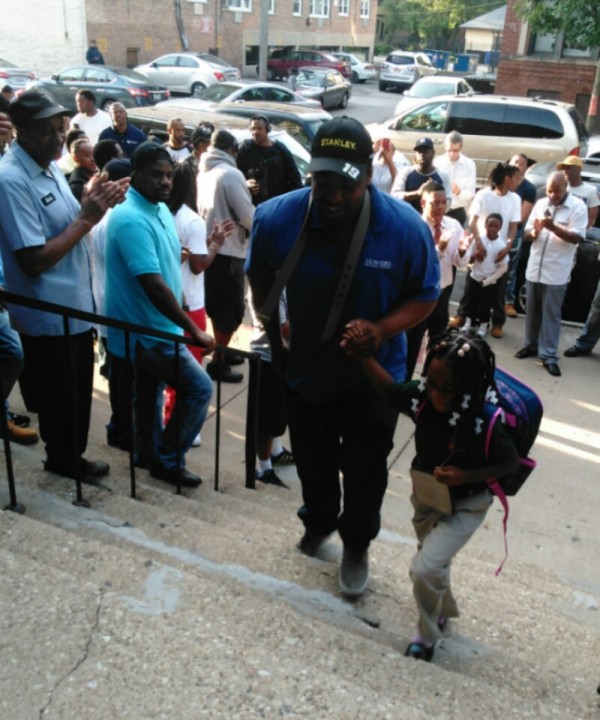 They stood on the steps of Catalyst Circle Rock School in Austin applauding, waving and high fiving students.

Nearly 200 men were there, all African-American, many fathers and others there just for support and solidarity.

The men were there to greet students entering the building. Many brought their kids to school on this day, as they do every other day.

Kevin Waddell, parent of an eighth-grader, said the day was about showing the importance of fathers in their children’s lives. It was also, he adds, about inspiring those dads who are not to become more involved.

“I really think it can, especially seeing all the fathers that’s out here today representing their children, and also representing other children,” Waddell said.

The morning included a breakfast for the dads prepared by the school’s cafeteria. The preparers, all women, remarked how good it was to see so many men come out, and that this day “is for you.”

Johnathan Sherod, who has a kindergartener at the school, said it was important to show support to the children and their education.

Many of the dads also talked about debunking the negative stereotype of “dead-beat black fathers.” Sherod said that negative image is the only one that gets seen in the community.

David Thomas, father of a third-grader, said seeing fathers come out like this has a great impact on men who aren’t involved with their kids.

“I tell them my story. I grew up without a father,” Thomas said. “I was bad when I was young, and I detoured to the negative. The outcome of that is I’m on a positive track right now. For 15 years I’ve been on the positive track, in my kid’s life. It make you feel good inside.”

Thursday’s event kicks off a series of activities planned for the school year around the “Father Power” theme, said Principal Elizabeth Jamison-Dunn.

Catalyst Circle Rock has celebrated the event since the school’s launch in 2006.
Dad-take-your-child-to-school day is actually a national event that started in the early 2000s, according to the event’s official website.

Jamison-Dunn said her campus is planning more events this school year to bring fathers out. She said the school wants to focus on fathers because their other parent group is mostly moms.

“We want to be more intentional by creating one specifically for the men of the community, and for them to come in and work with our scholars as well,” Jamison-Dunn said.

The advice she offers dads wanting to be more involved: just be present.

“Just the actual presence of these men can make such a difference,” she said. “I greet my students every single morning, and the smiles that I saw today were unparalleled.”