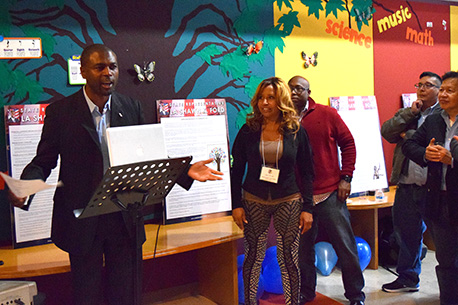 Ford kicked off his re-election campaign in front of more than 50 volunteers and supporters at the West Austin Child Development Center, 4920 W. Madison Ave.

Ford is seeking a sixth term in the Illinois General Assembly. He has not been opposed in any election since 2006, when he handily beat Republican Glenn Harris and Green Party candidate Nathan Paul Helsabeck.

Any challengers would face a well-funded incumbent. Ford’s last quarterly report (as of June 30, 2015) for his committee Citizens to Elect La Shawn K. Ford shows a balance of more than $191,000.

But Ford said it’s the issues the district faces — including crime, economic development and education — and not a particular opponent that would be the biggest challenge to another run in Springfield.

“The real challenger wouldn’t be an opponent against me, but the problems we have,” Ford said. “Immediately, we need to make sure we have equity and fairness in the state, to make sure everyone has opportunities to a quality education.

“We have to make sure we put a focus on early childhood education on the West Side and in the state.”

As for coming up with a solution for the wave of violence Chicago has seen this year, Ford said there needs to be more cooperation between lawmakers and the judicial system.

“We have laws on the books now, and if someone breaks the laws, they are certainly going to be punished,” Ford said. “What we have to do is work closer with the judiciary — the judicial system — to make sure they pay close attention to people they’re letting out with gun (convictions). Judges should not be letting a violent individual out of jail that has a gun case.”

Circuit Court of Cook County Judge John Fitzgerald Lyke said he agreed with Ford on the need for more cooperation, adding he also supports Ford because of his work with families.

“He’s very compassionate and passionate about children’s issues and single parents, so I have to support him on that regard,” Lyke said.

Ford made headlines in 2012 when a federal grand jury indicted him on 17 felony counts of bank fraud and providing false information. Ford eventually pled guilty in 2014 to a single misdemeanor count of tax fraud in exchange for prosecutors dropping the felony charges. He was sentenced to six months of probation and 100 hours of community service.

But Danette King, who was raised in the Austin neighborhood and now resides on the South Side, said she cares about what Ford has done in the community.

“He’s very loyal to his community and to the people, and he genuinely cares,” King said.

King said she thinks the district is moving in a positive direction, and she credits Ford for that.

“We’re definitely going in the right direction to create a better and safer environment,” King said. “Once that happens, it’s a domino effect of positive things happening in the community. So, (Ford) is definitely that foundation. The rest is up to us.”

Also speaking out in support of Ford was Amara Enyia, who’s begun her own exploratory campaign to challenge Congressman Danny K. Davis (D-7th) for his seat in the U.S. House of Representatives.

“I’m definitely supporting Rep. Ford,” Enyia said. “He’s been for as long as I’ve been working in the community, he’s always supported our initiatives and he’s always been very responsive.”

As for her own campaign, Enyia said: “We’re making our way around the district, meeting with residents, meeting with constituents, getting feedback, really hearing the vision people have.”

Enyia briefly ran for mayor of Chicago last year, dropping out before the general election.

She’s planning a stop on her listening tour in Austin sometime toward the end of October but did not have a specific date yet.

When asked about what voters should expect from him, Ford said just take a look at his name.