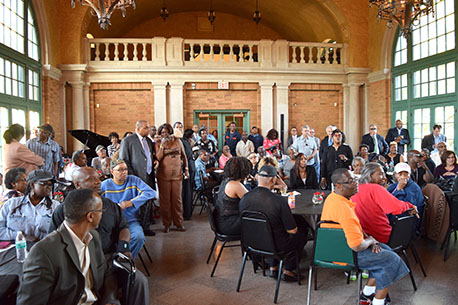 Taliaferro, along with the council’s 49 other aldermen — 13 of them elected for the first time — and Mayor Rahm Emanuel, were sworn in to office during a ceremony earlier Monday at the Chicago Theatre.

The party was the culmination of months of campaigning that ended April 7th when Taliaferro defeated incumbent Deborah Graham.

Some of Taliaferro’s most notable supporters showed up to congratulate the new alderman. Among them was U.S. Congressman Danny K. Davis (D-Chicago), who became a major Taliaferro backer after meeting with candidates for the 29th Ward seat.

“A number of people had said they were running, and we agreed to interview them all and we did,” Davis said. “We interviewed some twice, some three times, some four times. And Chris kept emerging as the person we reached a consensus on.

“I was impressed with his level of humility, that he wasn’t looking for a job; he saw this as an opportunity to be of service to the community … I think he’s going to be a great fit.” 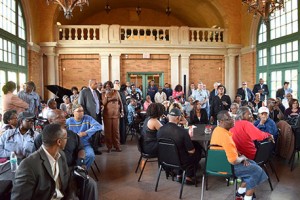 Davis, a longtime Austin resident, added that he thinks Taliaferro’s victory over Graham is a larger victory for the West Side ward.

Former 29th Ward Ald. Isaac “Ike” Carothers, a one-time ally of Graham’s, also was there Monday night. Graham succeeded Carothers after he resigned in 2010 and went to prison on federal corruption charges.

“I was part of a group of people who vetted 12 different candidates,” Carothers said. “I felt that he was the most qualified candidate at the time, so I decided to support him. I think that there are people in the ward who wanted a change. That’s evident by how the votes came out.

“I was no more than a volunteer like everybody else. Of course, I tried to add strategy and my contacts to help him along the way. I supported the campaign overall, but I had no particular role.”

But now the party’s over, the newly elected alderman will have to make good on his campaign promises.

Those promises include: finding ways to reduce crime and create economic opportunities for one of the city’s most impoverished areas. 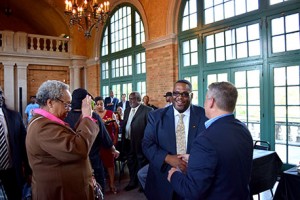 Taliaferro was not available to answer AustinTalks’ questions this week. Although he’s secured space in the 6200 block of North Avenue for his ward office, as of Monday night, there wasn’t a phone number for constituents to call.

At least one other West Side alderman will be meeting with constituents this week.

Tonight (May 20th) at 6 p.m. Ald. Jason Ervin (28th) will hold his “State of the 28th Ward” community meeting at the Garfield Park Conservatory, 300 N. Central Ave. The public is invited to attend.

And Ald. Emma Mitts (37th) plans to hold three community meetings in June, in addition to her already standing ward night meetings held every Monday from 4 to 7 p.m. at her office, 4924 W. Chicago Ave.

As aldermen started their four-year terms and begin addressing the city’s biggest problems, former Ald. Carothers had some advice for Taliaferro as he takes office for the first time.