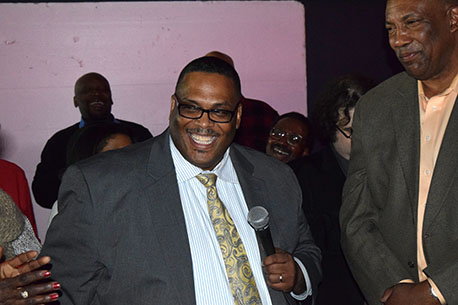 Jubilant celebration. That was the mood late Tuesday night for Chicago Police Sgt. Chris Taliaferro and his supporters once word finally came that he would be the 29th Ward’s next alderman.

In one of the tightest races of the Chicago City Council’s 18 runoffs, Taliaferro defeated incumbent Ald. Deborah Graham. With 42 of 44 precincts reported, Taliaferro had enough votes – 52.1 percent – to claim victory.

According to unofficial results compiled by the Chicago Board of Election Commissioners, 6,279 vote were cast for the first-time candidate, while the incumbent received 5,768, or about 47.9 percent.

Taliaferro forced the five-year alderman into a runoff when she failed to win at least 50.1 percent of the vote in the Feb. 24 election. In that race, Graham garnered 41 percent in a crowded eight-person race, with Taliaferro coming in second with 22 percent.

The announcement that Taliaferro had won came just after 10 p.m. as a packed crowd of supporters and family gathered at Valentino Club Cafe, 7150 W. Grand Ave. As the crowd watched media coverage of the April 7 runoff, cheers erupted each time an update for the 29th Ward scrolled across the bottom of the TV screen.

Taliaferro, 49, thanked his supporters for putting in the hard work he said got him elected to a four-year term serving alongside 49 other aldermen.

Before his victory speech, Ald. Graham, 48, called to offer her congratulations.

“She just congratulated me, and I certainly appreciated it,” Taliaferro said. “And I also let Ald. Graham know the 29th Ward will be in good hands.”

Graham was not available for comment after she conceded defeat, but earlier in the evening she seemed optimistic about her chances of keeping her $117,333 seat on the Chicago City Council.

“I’ve been here before,” Graham said. “My very first election, we didn’t have the answer to who won the race until the next day, so this is familiar territory for me.”

The former state lawmaker was surrounded by campaign volunteers and supporters, including one of her biggest financial backers, Illinois Sen. Don Harmon (D-Oak Park), as they anxiously tracked results Tuesday night.

Graham was first appointed to the seat in 2010 by then-Mayor Richard M. Daley to succeed Ald. Isaac “Ike” Carothers, who was forced to resign after being convicted on federal corruption charges. Graham had been a a protégé of Carothers’, but they later parted ways.

Over the last six weeks of campaigning, Graham criticized her opponent for being backed by Carothers.

The convicted felon’s endorsement of Taliaferro prompted Graham to send out mailers accusing the 21-year police veteran and former Marine of improprieties because of his relationship with Carothers.

“I was very surprised and disheartened that she would actually resort to those types of politics against me personally,” Carothers said Tuesday night.

The former alderman – who mounted an unsuccessful comeback last year to win a seat on the Cook County Board of Commissioners – said he was drawn to Taliaferro because of his desire to serve the public good and not just running for the job.

“That was impressive to me, that he was willing to run and, literally, take a pay cut, take all this abuse and all this time away from his family, that he didn’t have to do,” Carothers said.

Graham’ campaign treasury dwarfed her challenger. A week before the election, AustinTalks reported the incumbent had raised more than $260,000 since Jan. 1, far more than Taliaferro, who had raised just under $32,000.

Before taking office May 12, Taliaferro, who has supervised officers in the 25th District, said he would take a leave of absence from the Chicago Police Department and also turn over day-to-day operations of his law firm, Nexus Legal Group, to another partner.

But on this night, Taliaferro was just excited to have the opportunity to be the West Side Ward’s next alderman.

“I’m overwhelmed with joy and gratitude because it’s indeed a blessing to be able to serve the 29th Ward,” Taliaferro said.