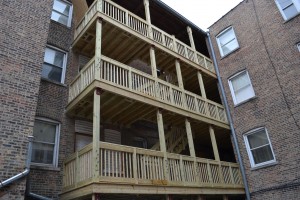 Four tenants living in a troubled foreclosed apartment complex who’ve been fighting since April to have health and safety concerns in their building addressed are now behind in paying rent and could be forced to leave their homes.

The tenants – who for months have voiced concerns about pests, mold and an unsafe back porch, among other hazards – are set to appear in court March 5 when the city of Chicago will present Cook County Circuit Judge Lauretta Higgins Wolfson with a motion that the tenants’ units be vacated.

“I don’t have anywhere for me and my kids to go,” said one of the four tenants, Pamela Johnson, who’s lived in the building at Laramie and West End avenues for more than a year.

Johnson said she and her three children would have to live in a shelter if she’s ordered to leave the building.

Janelle Teague, another tenant the city said is behind on rent, told AustinTalks last year she doesn’t want to rush to move out because she has six kids and doesn’t want to fall into a similar situation — living in a building that’s not being maintained and in foreclosure.

Multiple court-appointed receivers, who act as temporary landlords during the foreclosure process, have tried to step in to fix years of disrepair and failed city inspections, as reported by AustinTalks.

A past receiver, Peak Properties, said it didn’t have the funds to rid the building of bedbugs last year.

Johnson and other tenants went on a rent strike in April in response to the unsanitary and dangerous living conditions at the property including roaches, leaking ceilings and no heat.

That’s when a city-appointed emergency receiver, Chicago-based Community Initiative Inc. (CII), stepped in to speed up pressing issues in the apartment complex, such as turning on the building’s utilities, replacing broken windows, and fixing plumbing and electrical problems.

Maurello said the judge told the tenants their rent, which Maurello said is “very, very low,” would not be raised, and any late payments from the strike would be forgiven.

But the judge said all tenants would have to pay after Oct. 15 for CII to continue to make repairs, which are being paid for by the city, Maurello said.

Tenants assured the judge they’d make their rent payments, which range from about $316 to $408, Maurello said.

Although she couldn’t disclose specifics on how much rent the four tenants owe, Maurello said it’s likely some have not paid since October.

Johnson did say she is behind on rent, but said she’s working on getting the money together. She said Pioneer told her she owes $1,200, but Johnson said she’s made payments on that balance and owes about $850.

The tenants’ lawyer, Victoria Ogunsanya, with the Lawyers’ Committee for Better Housing, said they would fight the city’s motion to vacate.

“We’ll be presenting our side of the story to the judge, and she will decide whether or not the tenants should be given more time to remain in the property,” she said, adding that it’s not clear when the judge will make a final decision.

CII’s Maurello said the cost of its city-funded repairs since CII stepped in as general receiver is about $100,000, and the payments collected to date are $27,000.

CII “fought hard,” Maurello said, to persuade the judge in October to allow fixes to continue instead of ordering the property be completely vacated.

Maurello said although CII knew it wouldn’t recapture all the money for building improvements, vacating the property would put people out in the streets and leave another building abandoned in the already-blighted Austin.

A remodeled unit with new floors

Pioneer has made improvements to the building, including replacing wood floors and patching holes in a few of the vacant apartments, fixing plumbing issues and replacing most of the back porch, which previously had loose boards and handrails.

But some tenants said they did not receive proper notification about the porch construction, which wasn’t supposed to begin until this spring, said Ogunsanya.

“They torn down the whole back porch,” Johnson said.

“I just opened my back door. It’s a board up there. What if one of my kids opened up the back door? They would have (fallen) out.”

Greg Sorg, a manager at Pioneer, said the porch repairs were slated to begin in spring, but it was able to start construction sooner, which is what he thought the tenants wanted.

Sorg said Pioneer did notify all tenants about the porch.

“Sometimes miscommunication may occur,” he said, adding that the company went to every unit and told those who answered about the new construction date.

He said it’s possible someone in the unit didn’t relay the message.

A new lock was installed on the back gate.

“At some point the porch had to be done,” Sorg said. “I think sooner is better than later.”

Masonry repairs and replacing the building’s canopies will begin within the month, Sorg said.

Last year, thieves broke into the apartment building and stole the furnace along with copper piping, but the back gate is now secure.

“By the time summer hits, the place should be looking really nice,” he said.

Elce Redmond, an organizer with the South Austin Community Coalition Council who’s working with the tenants, said the four individuals targeted to vacate are the most active members of the ongoing campaign for fixing the living conditions in the building.

“They have been trying to get the back rent they owe to Pioneer … Pioneer’s people don’t want to work with them,” Redmond said. “The tenants see this as total retaliation for the work that they have been doing around this issue.”

Maurello said the order to pay rent comes from the judge, not from CII or Pioneer. And the order to vacate was brought by the city.

“(The tenants) are a party to this case, and the order is that they have to pay rent,” she said.