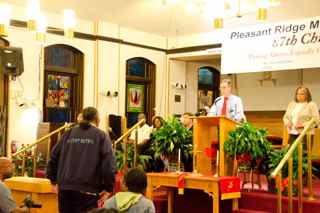 Aldermen, Austin-area detectives and more than 50 concerned residents gathered Thursday night to discuss a string of recent robberies and sexual assaults against women on the West Side.

Ald. Deborah Graham (29th) sponsored the community meeting, held at Pleasant Ridge M.B. Church, 116 S. Central Ave., in an effort to alert residents and share ideas about how women can best protect themselves from predators.

There have been eight related sexual-assault robberies on the West Side since August in the 11th, 12th and 15th Police Districts, Graham said at the meeting, adding that none of the incidents occurred in the 29th Ward. 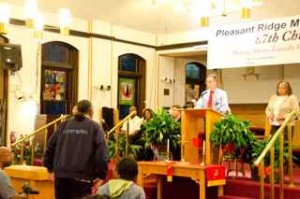 “We are being proactive, because we want to make sure that all of our community residents are completely aware of what’s going on and have an opportunity to protect themselves,” she said.

“We all have wards, but when it comes to people, there is no separation,” Mitts said.

“This is an opportunity for us to come together, and open our eyes and not be unnoticeable of our surroundings.”

Area 5 Detective Division Commander Joseph Salemme said the robberies and sexual assaults began Aug. 28. Three more incidents occurred Sept. 28, which prompted area detectives to put out a community alert on Sept. 29, he said. There have been four more victims since the alert went out to the public.

The most recent assault occurred Oct. 7 in the 600 block of North Leamington, the Chicago Sun-Times reported. 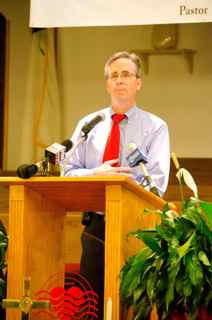 Salemme said one to two male, African-American offenders have approached females on the street while entering or exiting their cars or homes and robbed them at gun point between the hours of 3 a.m. and 6 a.m.

The offenders are reported to have pulled out a black revolver, announced the robbery and during the robbery sexually assaulted the females, Salemme said. They then flee with the victim’s purse, money and cell phone.

One of the offenders was described as having pink eyes, and the other offender had yellow eyes — distinctive characteristics, Salemme said.

Commander Walter Green of the 15th District advised women at the meeting to be alert while out at night and to travel in groups when possible. 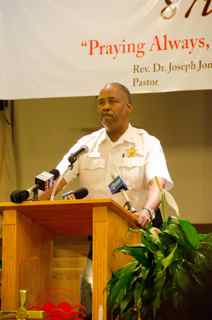 “Even though it didn’t necessarily occur in this ward, these things started in another part of the city, and their problems are our problems, too,” he said

Dwayne Truss, a member of the South Austin Community Coalition, said he was upset by the delayed response from police about the attacks. He said the first incident happened in August, but he did not receive an alert until last week.

“You have one fight break out in, let’s say, Lakeview or Edgewater, and you got the whole city there ready to meet about it,” Truss said at the meeting.

“Imagine how we feel … in our community we have to go through eight sexual assaults of our women before we got any kind of attention from the police.”

Salemme explained the delayed alert was an “administrative issue” involving poor coordination between detective areas rather than conspiratorial or laziness.

Rev. Tara Rice, associate minister at the First Baptist Congressional Church who lives in the 29th Ward, said West Side residents have a responsibility to look after one another.

“No matter how late we found out, the fact is that now we do know – what are we going to do about it,” she said at the meeting.

She said residents that are up within the time frame when the attacks have occurred should be watchful and report suspicious activity.

“We have to hold ourselves accountable in our own community.”

One thought on “Residents learn more about string of attacks”