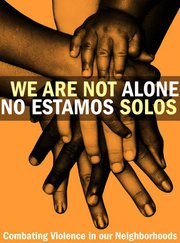 Standing on Madison Avenue last Wednesday night, a sea of people wearing red T-shirts could be seen for blocks as Austin residents gathered and prayed for the community’s safety.

AustinTalks is joining dozens of other organizations in this anti-violence campaign.

Ministers, church members, neighborhood groups and others gathered one last time Wednesday for “100 Blocks & 100 Churches” to form a unity chain that stretched on Madison Avenue from Austin Boulevard to Pulaski Road.

The initiative was organized last year by 15th District CAPS officers in hopes of reducing crime in Austin, especially during the summer when violence peaks. This year, the 11th District also joined the effort, adding more churches and block clubs to fight for the cause.

As the “red sea” engulfed Madison Avenue last week, prayers and hymns could be heard as the groups held hands and swayed back and forth and the oncoming traffic honked their horns in support.

“This is to let them [gangbangers] know that there is a presence and a light here,” said Rev. Shavonda Fields.

As a former violence prevention coordinator for the Austin area, Fields said violence has increased significantly “enough for us to stop doing what were doing” and start praying.

The groups and churches decided to hold the unity chain on the busiest street in Austin and at the busiest time – 6 p.m. – to reach as many people as possible.

Some pastors and organizations said they plan on returning to the streets every Wednesday and Thursday to pray as long as it helps stop the violence.

“Living World will be here everyday, year round,” said minister Gregory Brown. “Next year, we will bring buses.

“The community itself needs to know that they can take back what they lost,” said Brown. “But they have to be involved.”

Brown said even though crime reports haven’t shown a decline in violence, he insists the prayers are working: “What we are doing here is connecting. We are His ambassadors.” 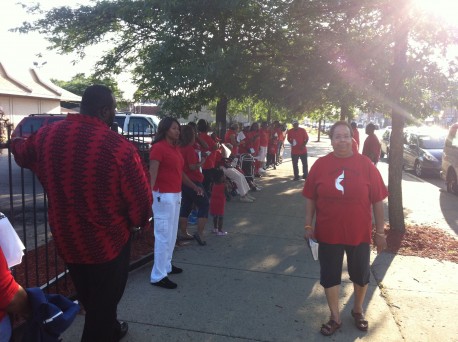 Mildred Wiley of Bethel New Life gets ready to take part in last week's unity chain, which marked the end of a month of prayer held on corners throughout Chicago's West Side.

Next June, the 11th and 15th Districts plan to continue the 100 Blocks & 100 Churches for a third year. The churches and community organizations hope to involve still more people. And they’ll be wearing their red T-shirts again.

“The red signifies the unnecessary blood that we lost in our community, and we want the bloodshed to stop,” said Mildred Wiley, senior director for community services for Bethel New Life.

“One thing we have to let people know is it’s not OK to keep killing,” said Wiley.