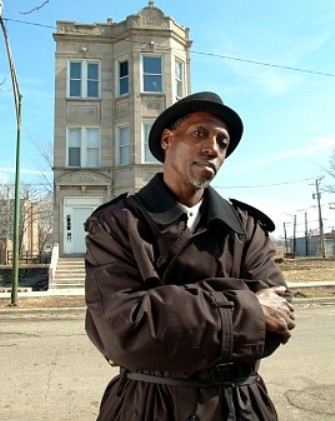 Blues music is a hidden treasure on the West Side, as Larry Hill Taylor and Bonni McKeown point out in Taylor’s recent autobiography Stepson of the Blues: A Chicago Song of Survival.

They’ve launched a campaign to un-hide the treasure and put the spotlight on West Side musicians – past and present.

Taylor and McKeown told audiences about the legacy at their Black History Month talks held in West Chicago, Legler, North Austin and Oak Park. Another talk is scheduled for April 4 at University of Illinois at Chicago, with a concert to follow.

*The West Side was home to Cobra Records, the first label to record Otis Rush and Buddy Guy.

*Muddy Waters found his first Chicago home on the West Side.

*Howlin’ Wolf played in many West Side “dens,” including Sylvio’s at Jackson and Kedzie.

*Magic Sam, an urban blues guitar pioneer of the 1960s, held barbecues in his backyard near Roosevelt and Pulaski.

*The Delta Fish Market at Jackson and Kedzie was also a market for all-day outdoor blues bands on weekends during the 1980s and early 90s—now succeeded by Wallace’s Catfish Corner at Madison and California, and Rooster Palace at Madison and Kilbourn, the Water Hole at 14th and Western, and now the Chez Roue at Laramie and Chicago. 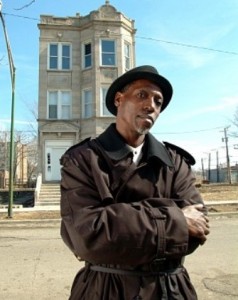 Larry Taylor, himself a singer and drummer, comes from a musical family. His mother Vera Taylor was a singer, and his stepfather Eddie Taylor recorded on VeeJay and played guitar with Jimmy Reed. Many of his brothers and sisters also perform, and his uncle Jimmy Burns, a soul and blues singer, lives in Austin.

Larry lives in Garfield Park with his family, not far from the apartment in the 1100 block of South Mozart where he grew up. He lived in Austin from 2002 until 2010 and visits Austin neighbors often.

One of his goals is to have an outdoor concert in LaFollette Park for the young and old. He’d also like to see blues and soul musicians included in more neighborhood festivals, along with hip hop, jazz, R&B and gospel.

It took Taylor’s own harrowing 50-year voyage through gangs, prison and drugs to clarify his purpose of spreading his musical heritage to the next generation. He’ll explore his years with the Conservative Vice Lords in his April 4 talk with Professor John Hagedorn’s UIC sociology class on Chicago gangs. Bullies and family problems led him to join the gang in the mid-1960s.

At that time, the Vice Lords were spearheading neighborhood improvement projects, which were squelched by political officials almost as soon as they started, after the 1968 Lawndale riots.

The Conservative Vice Lords ran an after-school youth center called the House of Lords, a clothing store the African Lion and a youth art center called Art and Soul. Black Panther leaders like Fred Hampton also tried to steer the gangs away from the drug trade, and worked toward education and economic development in the black community. You can read the history of the Vice Lords and other street gangs on Hagedorn’s Web site.

Click here to listen to the co-authors of Stepson of the Blues’ St. Patrick’s day interview on WGN.

For more information about Stepson of the Blues at www.stepsonoftheblues.com.