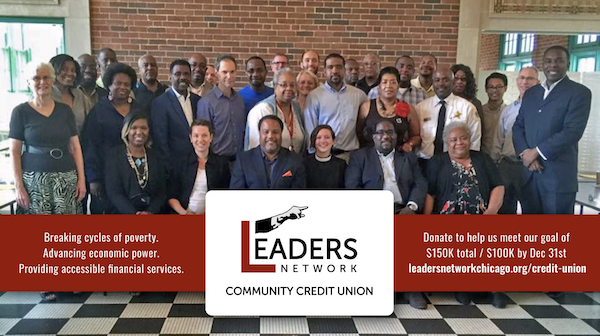 The Leaders Network has signed a memorandum of understanding with Great Lakes Credit Union to open a branch on the West Side.

“This is something that ultimately could change the landscape in America because Black people would be able to get loans in their own community without paying to much money or just outright getting denied,” Rev. Ira Acree said.

Michelle Collins, a former community development banker assisting the effort, said Great Lakes Credit Union is a “great partner” that aligns with the mission and vision of the Leaders Network. Earlier this year, Collins had said the faith leaders group was in conversations with larger credit unions interested in working with the group.

The two groups signed a memorandum of understanding – the first step – to enter a partnership that will allow the Leaders Network to open a credit union branch on the West Side after raising funds for about a year.

“The real great benefit is that without a partner like Great Lakes we would have to start from scratch,” Collins said. “With this partnership, we could immediately start operating when we consummate the partnership.”

Acree said one possible location for a branch is in the Soul City Corridor, potentially at the Sankofa Cultural and Business Center that’s operated by businessman Malcolm Crawford.

“It’s not a done deal, but that’s what I’d like,” he said, adding the Leaders Network met with Crawford, who leads the Austin African American Business Networking Association, who along with his team gave a “terrific presentation” about the potential location.

“Hopefully, we’ll have a nice Christmas present … to have a branch in the community in Sankofa,” Acree said.

Collins agreed said the Leaders Network’s goal is to reach a definitive agreement by the end of this year, allowing the credit union to start virtual operations, offering West Side residents and business owners financial services and financial literacy. The brick-and-mortar branch could take longer to open, she said.

“If we have the staffing, we could start opening accounts and online banking,” Collins said.

Acree said the Leaders Network still is seeking donations, which will help fund the associated costs of opening the credit union, such as licenses, fees, marketing and outreach. So far, $300,000 has been raised.

“I can’t wait for this to manifest, this is definitely one of the greatest things I’ve ever been a part of,” Acree said. “We’re so close, and I’m so very hopeful about because I think this could possibly be a national model. If it happens in Chicago, why can’t it happen in Detroit, St. Louis and other cities?”