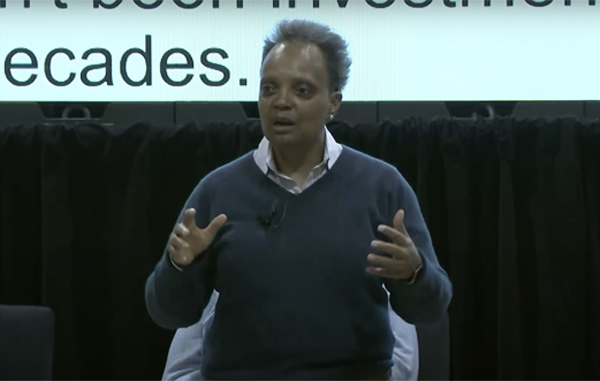 Investing in the West Side is a key to reducing violence, Mayor Lori Lightfoot told about 100 people at a recent town hall meeting.

“Violence is the expression of poverty,” Lightfoot said. “And you know that in too many areas on the West Side, we have generational poverty where there hasn’t been investments in people or places in decades.

“The real fight to bring lasting peace to communities all over our city, particularly here on the West Side, is we’ve got to root out poverty,” the mayor said March 19th during one of six meetings on public safety the Lightfoot administration is holding across the city.

Lightfoot said Austin, like other West Side communities, doesn’t have the same opportunities as other Chicagoland communities, which leads to an increase in violence in those areas.

The INVEST South/West program can have a huge catalytic effect in improving public safety in Austin, she said. Lightfoot’s remarks came during a roundtable at which two Austin residents told the mayor they want to live in a safe, healthy and vibrant community.

Austin artist and resident Vanessa Stokes said she wants to be able to walk in her neighborhood and get essentials, like healthy food and groceries. Her statement illustrates the food insecurity faced by many Austin residents.

“You should be able to walk and get healthy food and a decent cup of coffee,” Lightfoot said.

The mayor emphasized that investing in Austin through her administration’s INVEST South/West program is a long-term strategy to reduce violence and create a safe, healthy community. She noted that businesses owned by people in the community create jobs for community residents.

To prevent violence, there needs to be a more comprehensive approach that includes solutions like housing, mental health, job creation and youth engagement, she said.

Finding opportunities for police officers to engage with young kids and other residents is key to building trust and demanding accountability. Novalez urged residents to hold police accountable and participate in their district’s monthly beat meetings and annual strategic planning district meetings.

Community engagement is one of the key pillars of the city’s public safety efforts, which was presented at the meeting, one of several being held across the city. It relies on increasing collaboration between government officials and local residents at the block level.

“Government functions best when it is acting not just in service of the community but when it is allowing community to lead on the strategy that is going to be successful,” said Tamara Mahal, chief coordination officer for the Community Safety Coordination Center.

The Lightfoot administration also acknowledged the role structural racism and economic disinvestment has played in Chicago’s Black and Brown communities. It is at the core of the root causes that lead to violence, such as poverty and income inequality, unemployment, insufficient education opportunities and unequal housing, Mahal said.

The mayor and other city officials said key strategies include investing in commercial corridors and creating job opportunities; keeping young people engaged in and out of school; increasing mental health services; and incentivizing community participation.

A recording of the West Side town hall is available here.

The city will host four more community safety town halls, two of them on April 2 at Harold Washington Library in the winter garden room.

The first starts at 10:30 a.m. and will focus entirely on efforts to reduce and prevent violence among youth. It being held specifically for residents between the ages of 14-24. Advance registration is encouraged but not required.

The second town hall, beginning at 2:30 p.m., will be focused on community safety efforts in the City Center/Near North, South Loop and West Loop regions of Chicago.