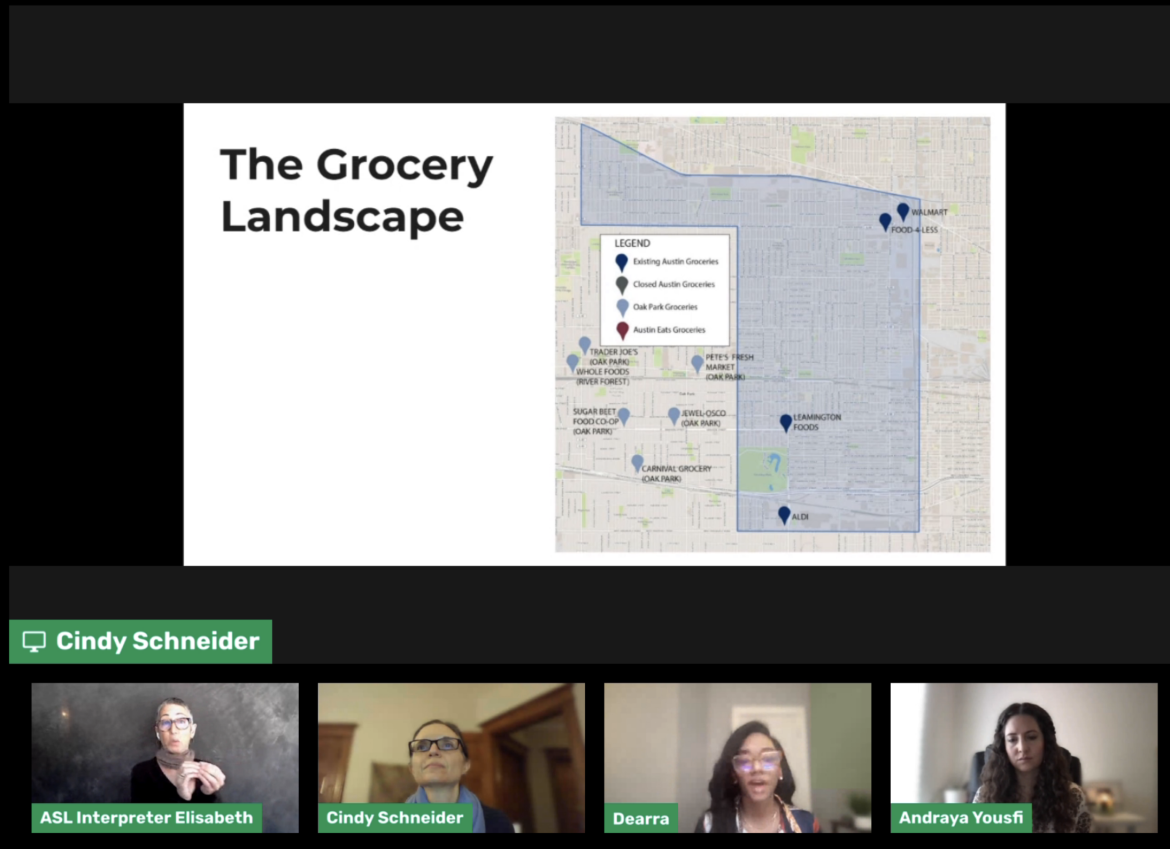 Austin Eats shared its work to advance food justice on the West Side.

In a 50-minute session on Thursday, three leaders of Austin Eats’ working groups discussed how the coalition has relied on about 20 committed partners who are working together to promote and increase access to food resources across Austin.

The Austin Eats initiative started in fall 2020 in response to the COVID-19 pandemic that exacerbated the problem of people going hungry.

Dearra Williams, born and raised in Austin and a member of Austin Eats’ marketing working group, shared her story as an example of the disparity she and other West Siders experience when it comes to access to food, made worse by the pandemic and the recent closures of grocery stores in Austin.

“The lack of overall resources in the Austin neighborhood should be illegal,” Williams said.

Austin is the second most-populated of Chicago’s 77 community areas and has some of the greatest assets like Columbus Park, which serves as a community and relaxation space, Williams said.

But Austin has suffered from disinvestment resulting in social and economic disadvantages that limit access to fresh and healthy food in the area. As a result, residents are forced to shop outside their neighborhood.

Austin residents spend 85% of their disposable income in neighboring areas.

“Access to fruits and vegetables is very low, with just over half of Austin residents being able to access them easily and affordably,” Schneider said.

In 2021, the Austin Garden Collective provided funding for the construction of the Mildred Wiley community garden in Bethel New Life, which has served a range of community members including seniors and daycare children with programming provided by Windy City Harvest, Schneider said.

“For 2022 and beyond, Austin Garden Collective is working with NeighborSpace, Chicago’s community garden land trust, to generate events and build projects that will better connect the gardens to each other and the larger community,” she said.

“This is a group of extraordinarily creative people,” Yousfi said. “Grocery access is a very complex problem, and the solutions are multifaceted and very complex as well.”

The Austin Community Food Co-Op, a group that is working to create a member-owned, Austin-owned full service grocery store, has also succeeded in engaging the community on the concept and benefits of a food co-op, Yousfi said.

“Again, there are over 95,000 residents in Austin. … We know we have the infrastructure to support more than one grocery store,” Yousfi said.

Austin Eats also partnered with local groups to address the challenges faced by West Side entrepreneurs during the pandemic, Yousfi said.

Through a partnership with Hatch-Made Meals, a grant-funded program led by The Hatchery, a West Side food incubator, Austin Eats distributed chef-made meals at no cost to Austin residents while ensuring culinary entrepreneurs had a constant revenue stream when restaurants and events shut down because of the pandemic.

Yet, food access continues to be a challenge given limited resources and the lack of places to store cold food, among other hurdles. In the upcoming months, Austin Eats wants to focus on increasing food donations and find ways to serve senior citizens in need of emergency food but an increased risk for COVID-19.

“As the pandemic just lingers on, the need is still there but the resources are drying up,” Yousfi said. “So there’s just been a lot less food distribution and access to food for families in the last few months.”

“There’s a little bit, I think, of fatigue, in general of everyone in this emergency state, but we’re still in an emergency,” Yousfi said.