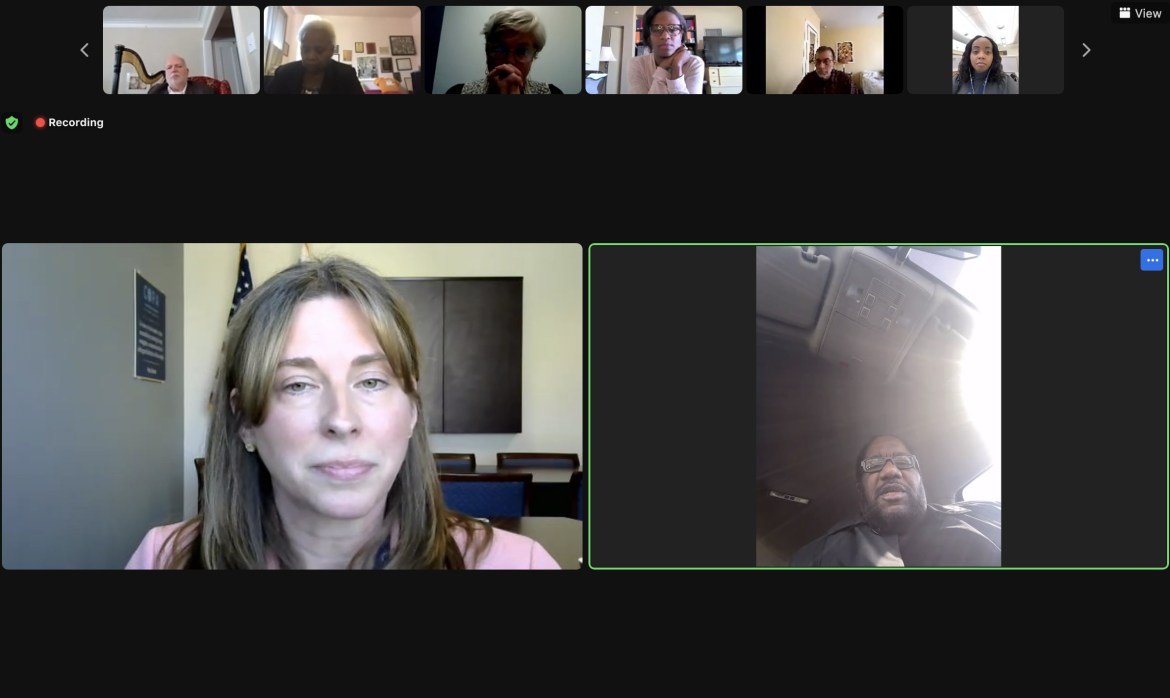 “There are two very strong themes that come across clearly when we talk to impacted parties in the communities that we serve, and the police department, frankly,” Kersten said at this month’s meeting of the Leaders Network. Those two things are “the timeliness of our investigations as well as increased transparency.”

On average, it takes COPA 18 months to complete a police misconduct investigation. In comparison, the Independent Police Review Authority, COPA’s predecessor agency, took an average of 30 months. But there is still room for improvement, Kersten said.

“We need to continue to create the kind of operational efficiencies that will allow us to reduce our caseload so that we can deliver justice in a quick and timely manner but, of course, without ever eroding investigative integrity,” she said.

Leaders Network President David Cherry agreed that timeliness of COPA’s investigations is a priority for his group and asked what would be a reasonable standard.

Kersten said she would like to lower the average to six months, and she wants an even shorter timeframe for cases that can be resolved faster.

The Chicago City Council confirmed Kersten as COPA’s new leader last month after her nomination was initially rejected because several alderpersons were upset about how the agency had disclosed information about police officer Ella French after she was killed in the line of duty.

“She has demonstrated tremendous courage, even at the sake of her career being threatened and her reputation being sullied,” he said.

Rialmo and his partner were called to a two-flat in the 4700 block of West Erie Street on Dec. 26, 2015, after reports of a domestic disturbance between LeGrier and his father. LeGrier was in the midst of a mental health episode, and his father had barricaded himself in his bedroom while the younger LeGrier, wielding a baseball bat, tried to enter.

LeGrier’s father called Jones, who lived downstairs, and asked her to open the front door for police when they arrived. LeGrier came charging down the stairs with the bat and swung at Rialmo, who ducked then opened fire, killing both LeGrier and Jones, the Sun-Times reported.

COPA was responsible for investigating the incident and recommended Rialmo’s discharge from the Chicago Police Department in what became a highly visible case. Then-Supt. Eddie Johnson objected to COPA’s recommendation, leading to the case being reviewed by the Chicago Police Board. Rialmo was fired in October 2019.

An Illinois appellate court on Friday rejected Rialmo’s latest attempt to rejoin the Chicago Police Department, according to the Chicago Sun-Times.

“Frankly, transparency is why COPA exists, or rather the need for transparency,” Kersten said.

Starting this year, COPA will have a unit with staff dedicated solely to handling issues of transparency, including providing access to public information in a timely manner in compliance with local laws and policies. This includes releasing videos of police misconduct, processing Freedom of Information Act (FOIA) requests and releasing body-worn camera footage.

Kersten noted that since its creation in 2017, COPA has made improvements in areas that were highly criticized, including its independence and the quality of its investigations.

COPA has worked to ensure “the quality and caliber” of the staff performing police misconduct investigations with integrity and quality, Kersten said.

“We have seen incredible gains with respect to our investigations and our recommendations standing up to scrutiny,” she said. “Whether that’s scrutiny of process when it goes before the Police Board to try to terminate an officer, scrutiny of the media, scrutiny of impacted parties, scrutiny of the police department itself.”

She also emphasized COPA’s responsibility to perform its investigations consistently, fairly and with deep understanding of the laws, directives and orders of the Chicago Police Deparment that govern officer conduct.

“I have the distinct privilege of getting to … decide what we want to focus on next as an agency,” Kersten said. “And in approaching that decision I’ve really tried to listen and understand what is still needed from us as an agency.”

“Andrea, I want to say you this is a golden opportunity for you once and for all, for Chicago to have finally a police oversight board to have independence from the toxicity of City Hall,” Acree said. “Now, we know and we believe that you will hold police accountable.”

Pastors Cy Fields and Marshall E. Hatch shared their concerns about the limitations imposed on COPA as a police oversight agency, specifically regarding off-duty police conduct. They pointed to an NPR story about some Chicago Police officers being affiliated with the far-right organization Oath Keepers and questioned COPA’s role in investigating these cases.

Kersten said COPA’s jurisdiction is limited to specific types of individual complaints; COPA does not have the authority to investigate violations of general operational procedures of the Chicago Police Department, such as an affiliation with the Oath Keepers group. These type of complaints fall under the police department’s Bureau of Internal Affairs.

“We have seen a glaring inadequacy of the oversight of the police department in the limitations of what your agency can do,” Hatch said.

He said these limitations cause a great gap in holding the Chicago’s Police Department accountable, particularly given its racist history and disproportionate surveillance on Black and Brown communities in Chicago.

“We are addressing specific allegations of police misconduct. What we cannot address as an agency alone is police culture,” Kersten said.

She noted there is a dedicated unit in COPA that provides feedback to the department about policies that could prevent instances of police misconduct from occurring.

“I share your sentiment. COPA is not the beginning nor the end of police reform. We are part of the process,” Kersten said.

Faith leaders stressed that Kersten has a responsibility in her new role as chief administrator.

“This organization will also hold you accountable as you hold the men in blue accountable,” Acree said.

Also at the meeting, Michelle Collins, a former community development banker and West Side resident, shared an update on efforts to open a West Side credit union.

Austin residents are being asked to complete an online survey about what kind of products and services they would use. The survey is available through March 25, and up to five participants could receive a $50 gift card for completing the survey.