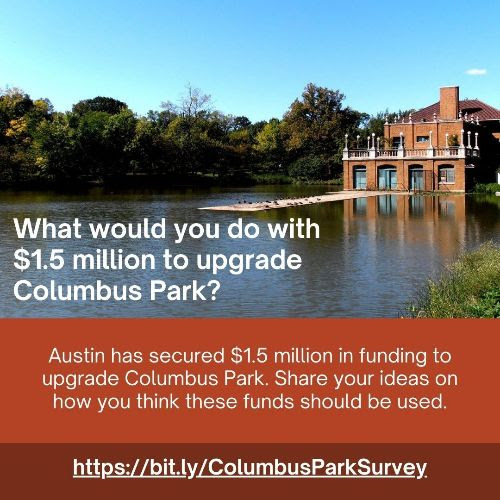 How should $1.5 million be spent to update Columbus Park?

The two West Side residents who proposed and secured the funding for the Austin park through the Chicago Works Community Challenge want the community’s input to help guide next steps.

The two-person submission team – hip-hop artist Samantha Jordan and Austin Green Team vice president Tina Augustus – recently met with the Columbus Park Advisory Council and Austin Coming Together to get feedback on the proposed renovations and strategize on how to raise awareness about Columbus Park winning the grant.

They hope to garner even more input through a short survey (found here), an in-person town hall and monthly virtual meetings.

“The funds are staying in the city. So it’s just going to different departments depending on what the grant is for,” Jordan said. “Since ours was the park, we will be partnering with the Park District.”

The Chicago Park District has not provided a concrete timeline for the project, but during the ceremony at which Mayor Lori Lightfoot declared Columbus Park and six other projects had been selected, she said she expects the work to start this year.

Jordan submitted the proposal in May 2021 after connecting with Augustus and leaders from Austin Coming Together about her idea to fix up the park.

“We really feel like there’s a lot of connectivity between the vision and goals laid out in [Austin’s] quality-of-life plan and … a significant pot of funding [that] can help really activate an already pretty vibrant space,” said Ethan Ramsay, a lead organizer of the Austin Forward Together plan.

Nearly 500 proposals were submitted citywide, then a committee chose 21 proposals as semi-finalists, three from each of seven regions of the city.

The Columbus Park proposal was selected out of the three semi-finalists for the west region in October, then Jordan received a letter in early January notifying her that Columbus Park had won.

Jordan, who has lived in Austin for five years, was driven to look for ways to get more involved with the community when the pandemic hit in 2020.

She happened upon the announcement for the Community Challenge while browsing the city’s website for artist grants. Next, she reached out to local organizations about the challenge and received a response from Augustus, who has wanted to see updates to Columbus Park for some time.

The proposal included plans to provide a performance area for live music and entertainment; a food truck area that West Side vendors could use; and an exercise area with outdoor equipment. Other ideas included improvements to existing spaces, such as the tennis courts, walking paths and natural areas.

The 140.65 acre park is considered the masterpiece of landscape architect Jens Jensen and is one of the few parks in the country to be designated a National Historic Landmark in its entirety.

The Park District will ultimately determine what renovations are feasible then implement them.

Jordan said the hope is the work will be finished so the park’s improvements can be enjoyed by next spring.

“I just want people to get excited, and maybe this quick development will help lead to the next block because I know we got a lot of vacant blocks. So if this program continues, we can make more suggestions for these blocks and get them all activated over time,” Jordan said.

The recording of the award ceremony and list other project winners can be found here.