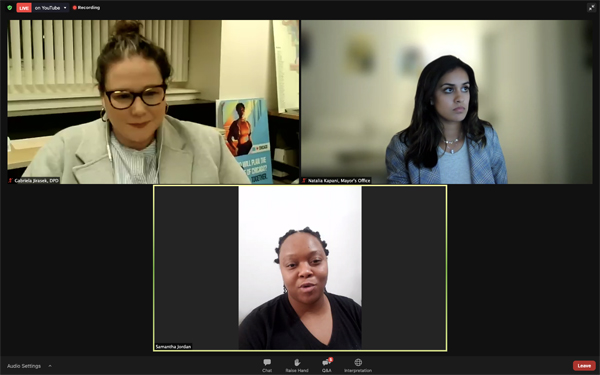 An Austin resident’s idea to improve Columbus Park is one of 21 proposals officials are considering as part of the $10 million Chicago Works Community Challenge.

Seven projects – one from each of the city’s seven planning regions – will get up to $1.5 million apiece. The Columbus Park project – proposed by Samantha Jordan – is vying with two other projects in the west region.

“We are very excited to share all the projects that were submitted for the west region,” Gabriela Jirasek, an assistant commissioner with the Chicago Department of Planning and Development, said at a virtual meeting held last week on Zoom.

Jirasek noted the west region received the second greatest number of submissions out of all the regions; citywide, over 500 proposals were submitted before the seven semi-finalists were announced earlier this month.

“There’s a need to modernize the park for the residents of Austin,” Jirasek said, noting the proposals are community-identified enhancements to a public park, library, school or residentially zoned, city-owned vacant lot.

The Columbus Park proposal calls for adding amenities such as a permanent performance stage area, an outdoor movie screen, and renovated basketball and tennis courts. Sculptures, lighting for night events and Wi-Fi-equipped seating areas for students also could be put in place.

Jordan said she submitted her proposal to help address the disparities she sees in Austin compared to other Chicago neighborhoods.

“2020 was a year of learning about my community, and a lot of what I learned I didn’t like,” Jordan said.

Columbus Park hasn’t had any updates since the early 1990s, she said. Now is the time for the park to receive some attention because “we’re in the midst of a revitalizing effort to recharge this community. It’s beautiful, and the people are tough and resilient.”

She noted Austin has 93,000 residents, mostly African Americans with a growing Hispanic population; Columbus Park – with all its open space – would be a good place for these two groups to come together.

Nearby Central Avenue is being repaved, which would complement the improvements that could be made at the 141-acre park, which features a nine-hole golf course, an outdoor pool and field house, a bike and jogging path, a fishing lagoon, tennis and basketball courts, and baseball, football and soccer fields.

The park is considered the masterpiece of landscape architect Jens Jensen and is one of the few parks in the nation to be designated a National Historic Landmark in its entirety.

Yet “the fences are damaged, and it’s right along the expressway. It’s very unsightly,” Jordan said. There are no bleachers or concessions available, so it would be great to have an area for food, she said, adding that so much money leaves the community each day because Austin doesn’t have the necessities that other places, like Oak Park, do.

“This is me shooting for the stars,” she said. “Everyone is excited” about the proposal being a semi-finalist. Being selected as a finalist would “spark and reignite people’s passion,” Jordan said, adding residents want to define their community, not be defined by others.

“I want to have something where we can enjoy each other and learn how to love and take care of each other.”

To see last Thursday night’s session, during which the Columbus Park project was discussed, click here. Officials are also conducting a survey as they decide which project in the west region to select. Complete the survey here.