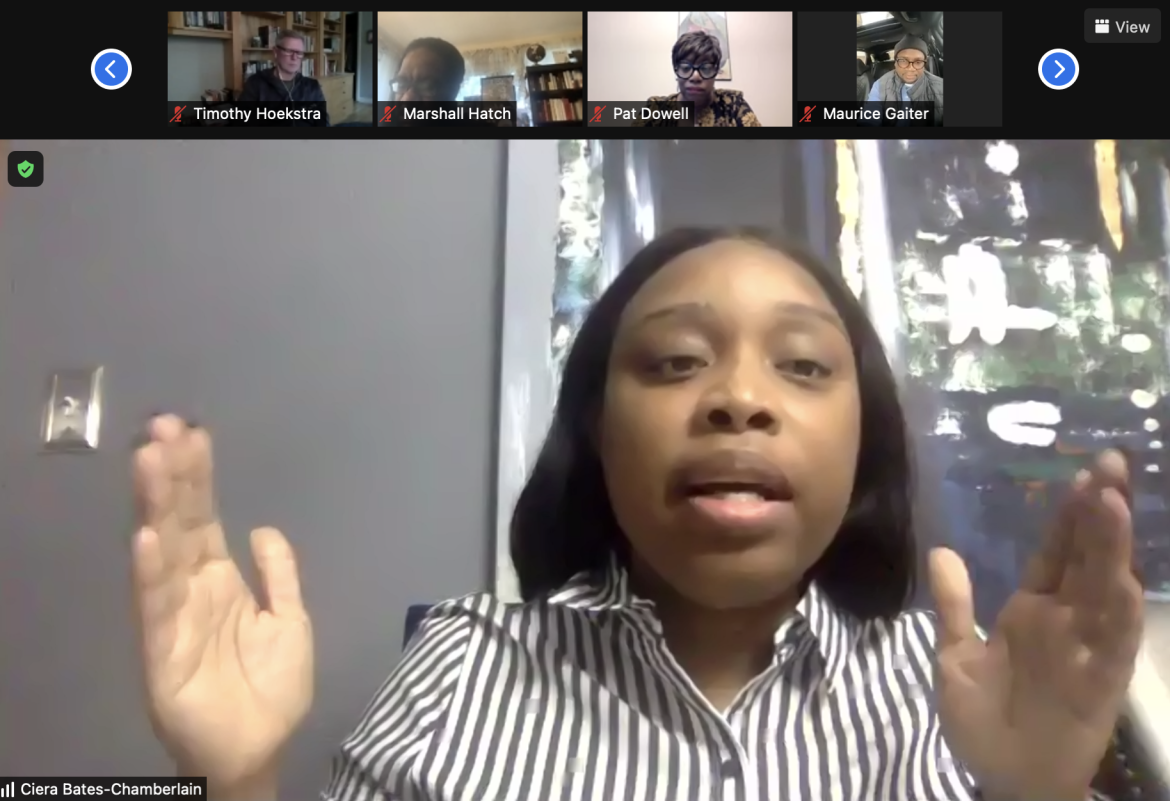 In support of the Leaders Network’s effort to open a credit union on the West Side, Grace Lutheran Church recently donated $10,000 — the largest donation made out of the $62,000 that has been raised so far. Their goal is to raise $150,000.

David Lyle, senior pastor of the church located in River Forest, opened the November Leaders Network meeting, titled “Breaking the Cycle of Disinvestment in Communities of Color,” by encouraging others to support as well.

“We had a surplus and, in this moment, in the midst of an ongoing pandemic and all the endemic challenges that our communities face, it was pretty clear to us pretty quickly that that money was not for us to keep or squirrel away for a rainy day,” Lyle said.

“When I heard about it and was reading about it, what struck me about the credit union was how incredibly sensible it was, how much it made sense as an idea to not simply do what we need to do in terms of providing basic services but providing access – providing access of opportunity, providing access for people to participate in the economy, rather than simply being subject to the economy.”

The Leaders Network is still looking for people to join their Founders Circle, which commits them to raise $5,000 minimum. President David Cherry shared they have been getting new members after each monthly meeting.

Other community and faith leaders shared their commitment to continue supporting it, some even sharing their desire to raise more after learning of Grace Lutheran’s donation.

Opening and chartering a credit union in Illinois is not common.

According to Robin Hollis, regional director for the Illinois Credit Union League, the group gets about six new charter requests a year, and most don’t come to full fruition – the money needed to start typically being a barrier.

Some new credit unions start from the ground up and others become incubated under a larger credit union, then spin off. Then some assume other charters, which gives them access to the assumed charter’s field of membership and any equipment.

The Leaders Network group still has not decided which option to pursue.

“We have been working and discussing some of those options and exploring those options with the Leaders Network group,” Hollis said. “And we’re willing to pull out any stops necessary that are feasible to make this happen in that community.”

Throughout the Leaders Network’s recent meeting, various people spoke about issues such as gun violence and how responsible financial investment in communities is needed to address them.

“For the largest issues that are plaguing Chicago, we have to ask the question about a moral budget, do we want to make the investment to save lives?’” Bates-Chamberlain said.

Leaders Network co-chair Rev. Ira Acree said even if gun violence is solved, there would still be a racial economic gap that needs to be fixed for communities to thrive.

“We know that in our communities, and specifically here on the West Side, we have people who are unbanked and underbanked and just can’t get access to checking accounts and loans,” Acree said.

“Even if our communities are safe … we have to look at the root causes. The economic exploitation and lack of opportunity has been a big cause of the violence.”

Having a credit union on the West Side could help provide that economic opportunity.

Credit unions are member-owned, making those who join part of a cooperative and giving them some ownership stake. Members also help select the board of directors, which sets rates and creates products and services. Additionally, credit unions tend to have better loan and savings rates than banks.

“Being involved in the credit union, hopefully, you’re ensuring that that credit union is serving the best interests of its members,” Hollis said.

“Making a difference in a community that is highly unbanked and lacks access to capital, I think that’s a wonderful reason to start a credit union. Because that’s what credit unions are about: They’re about people helping people.”

Donations for the credit union can be made online or by mailing a check to 22 N. Kildare, Chicago, IL 60624.