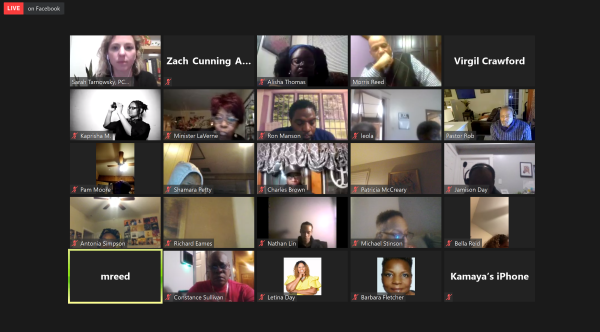 Dozens of people gathered last week on Zoom for the Westside Health Authority’s Good Neighbor Campaign monthly meeting, and COVID-19 was on the minds of many.

Westside Health Authority CEO Morris Reed said they were there, in part, to discuss the misinformation spreading about the coronavirus, which has killed nearly 20,000 people in Illinois.

“The misinformation is what really messes us all up,” Morris said, explaining they had brought together a group of doctors to clear up all the misinformation at once so attendees could then spread the word.

“You are the leaders. People may not trust the doctors who present tonight, but they trust you,” Reed said. He called on them to be health leaders in their community.

Dr. Thomas, who grew up in Austin, said she hadn’t felt comfortable getting the vaccine initially.

After “having a chance to really delve into this issue,” Thomas said she feels “more confident that it’s a useful tool to be able to fight this virus.”

Dr. Tarnowski said despite the speed of the vaccine’s emergency authorization and rollout, no corners were cut during trials.

She said institutions conducting COVID-19 vaccine studies were “able to glide through the … clinical trials quicker because” they had fast access to funds that would usually take years to acquire under normal circumstances and strong participant recruiting on a national scale.

Once the vaccine is available, most everyone is being encouraged to get it. The one exception: Pfizer’s fact sheet for their shot, which The Loretto Hospital is administering, recommends women who are pregnant or breastfeeding consult with their healthcare provider before receiving the vaccine.

Tarnowski said both the Pfizer and Moderna’s shots are about 95% effective.

Last Monday, Jan. 25 Loretto began vaccinating residents under phase 1B of Chicago’s vaccine distribution plan. It opens the vaccine to Chicagoans over 65, as well as those living in correctional and residential settings (like nursing homes) with local outbreaks. Frontline, essential workers including first responders, teachers, grocery store workers, those in public transit and manufacturing, and certain government workers also are eligible to get the vaccine.

At the end of March, the city expects to move to phase 1C, which includes all other essential workers and residents who are 16 to 64 years old with underlying health conditions.

Dr. Tarnowski noted that moving from phase 1A to 1B does not mean those eligible under 1A will stop receiving the vaccine. “We continue to vaccinate 1A.”

Daniels, who had COVID in November, got vaccinated because he “just didn’t want to have it again.”

The vaccination experience was quick and uneventful: “We went in, took a couple minutes to fill out a few sheets of paper. Got our shots … it just went that smooth.”

Daniels said the only side effect he experienced was a little soreness in the injection area, similar to a flu shot. “Other than that, no other issues.”

Crystal Carey, emergency preparedness coordinator at Loretto, said Thursday they had been averaging about 200 people per day for last week.

Their ultimate goal is to administer 2,000 to 3,000 shots per week, if they can balance supply (which is limited) with demand (which is high).

Carey said people should get vaccinated because it’s the right thing to do.

“COVID is real, and it’s not going away. In order for it to continue to improve, we have to get everybody vaccinated.”