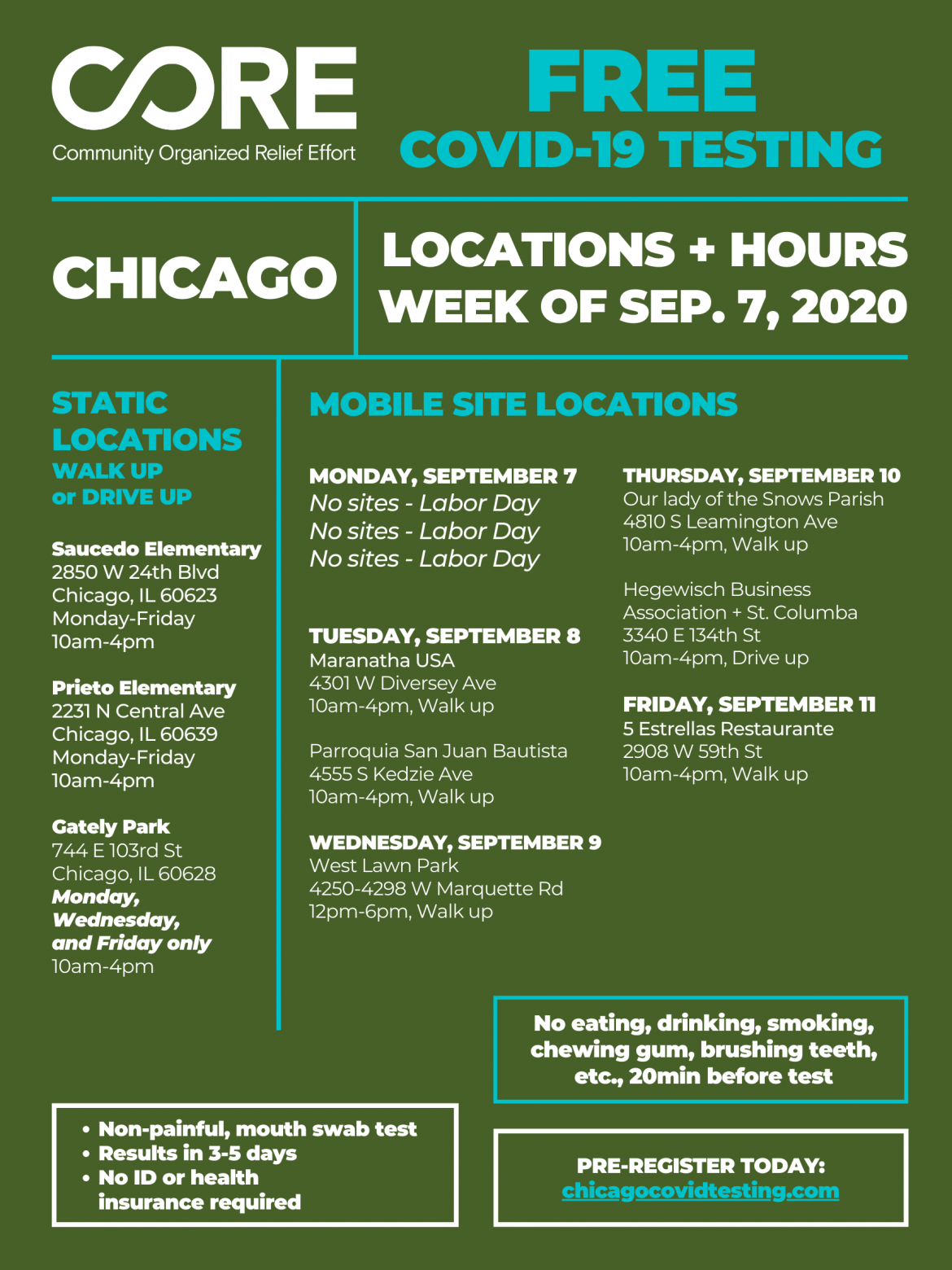 It’s been two months since the Chicago Department of Public Health shut its COVID-19 testing site in Columbus Park. The testing site – located in a parking lot near the sixth hole of the park’s golf course and one of five citywide – was closed as public health officials ramped up mobile testing. Since the city launched its mobile testing program June 23, there have been one to two mobile testing sites per day across the city – in addition to three static sites, the closest now being in Belmont Cragin, 2231 N. Central Ave. Over a 49-day period in July and August, there was mobile testing available in Austin on 12 days, and more than 4,500 tests were done. That’s well more than the nearly 3,000 tests that were conducted at Columbus Park over 53 days in May, June and July. The decreased availability of daily testing in Austin has at least one public official concerned, given the number of COVID-19 cases, while another said he’s not worried. Austin’s two largest zip codes , 60644 and 60651, have seen a total of nearly 4,000 COVID-19 cases as of Sept. 9, according to state data. And there have been 171 COVID-19-related deaths in Austin as of Aug. 29, the most recent date for which information is available. Earlier this summer after the Columbus Park site closed, Darnell Shields, executive director of Austin Coming Together, was in touch with  representatives from the city and Community Organized Relief Effort, a non-profit founded by actor Sean Penn that helps operate testing sites across the country. In an email, Shields said his understanding was there had been low turnout at the Columbus Park site and CORE thought it was too expensive to keep the site open; they wanted to leverage their resources for mobile testing instead. Shields said he was also told the Chicago Park District wanted to reopen Columbus Park’s golf course, and there were concerns about testing and golf happening concurrently. That did not sit well with state Rep. La Shawn Ford: “If it’s true that the city of Chicago substituted golf for Coronavirus testing, … that’s a poor decision and threatens the health and safety of the families in the Austin community.” Michele Lemons, director of communications at the park district, did not respond to requests for comment. In response to a Freedom of Information Act request, the park district stated it has no records about the Columbus Park testing site being shuttered and advised AustinTalks to contact city health officials because “the choice to close the site was made by the Chicago Department of Public Health.” Ald. Chris Taliaferro said from his personal observations he could see the Columbus Park site was under utilized, and he believes there’s still sufficient testing in the 29th Ward. Taliaferro said while he would not turn down another testing site, “we are serviced very well with at least four testing sites that are very centrally located for ward residents to get to quickly.” Dr. Nikhila Juvvadi is chief clinical officer at The Loretto Hospital, 645 S. Central Ave., one of four remaining locations in Austin for residents to be tested for COVID-19. She said the hospital was not consulted about the potential impact of shutting down the Columbus Park site. “Despite the fact that Austin has been disproportionately impacted (by COVID-19), there is not nearly enough testing on the West Side.” Residents can also be tested in Austin at PCC Community Wellness Center at 5425 W. Lake St., Walgreens at 1606 N. Mobile Ave. and Howard Brown Health at 9 N. Cicero Ave.