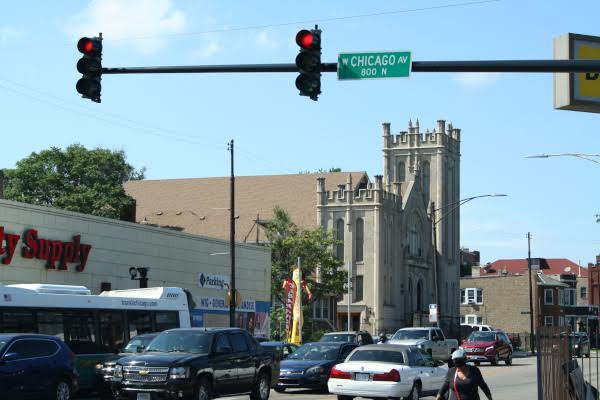 From the 1920s until the 1960s, Austin was a bustling hub full of workers. Train service to the city ran frequently, and parks, mansions and a town hall were built.

Then in the 1960s and 1970s, the African American population began increasing, and white residents fled.

A campaign of blockbusting and redlining by banks and government officials quickly turned Austin “from a thriving social and industrial hub to a depressed economic area,” according to Austin Coming Together.

In recent years, Austin Coming Together and other West Side groups have been working to restore business – and all the opportunity that goes with it — to Austin.

The Chicago Department of Planning and Development announced earlier this year the Chicago City Council had approved an additional $7.3 million for contracts with Local Initiatives Support Corp. and Main Street America for the implementation of INVEST South/West.

INVEST South/West, launched last fall, is a $750 million initiative to revitalize 10 economic corridors on the South and West sides. One of those corridors is in Austin, the section of Chicago Avenue between Austin Boulevard and Cicero Avenue.

Other West Side corridors include further east on Chicago Avenue from Pulaski Road to Kedzie Avenue; and North Avenue, from Cicero Avenue to Central Park Avenue.

Deputy Commissioner Jim Harbin said the money will be used by LISC and Main Street America to hire a manager for each corridor, as well as provide training and support, and to facilitate engagement with community members.

One of those stakeholders is Malcolm Crawford, executive director of the Austin African American Business Networking Association. He also runs Sankofa Cultural Arts & Business Center at 5820 W. Chicago Ave. – in the midst of the Austin corridor.

Crawford has been working for several years to turn Chicago Avenue into the Soul City Corridor – a celebration of black music, food, art and culture.

“Chicago is known for its diversity of communities,” he said.

While there is Chinatown, Greektown, Boystown and Ukrainian Village, “there is no economic driver for African Americans,” he said.

Crawford said when he started talking about creating a Soul City Corridor in Austin several years ago, no one understood what he was trying to do.

Now, he said, people know the importance of having a place that allows everyone to come and experience the richness of African American culture.

One of the new business owners on the Soul City Corridor is Devin Sims.

Sims opened Roasted Leaf, a cigar shop and café at 5925 W. Chicago Ave. in February. He decided to start his business in Austin, where he lives, because there aren’t any cigar or coffee shops in the area.

“You gotta go outside of our neighborhood to even enjoy a good cup of coffee or to get a good cigar,” he said.

Roasted Leaf closed for several months after a fire in March but reopened Aug. 1.

Austin is missing more than good coffee and cigars.

Sims, Crawford and 29th Ward Ald. Chris Taliaferro all said there is a need for diverse businesses, especially sit-down restaurants, so residents can spend their money in Austin.

Crawford said multiple research studies found that one of the biggest things people want is venues where they can actually sit down and have food and a drink while interacting with each other.

“People really want to be able to access their community … the only thing you can do in Austin is go to church and go home.”

“We need to have a corridor that’s going to keep residents working and shopping along the corridor, rather than taking our dollars outside of the corridor and into neighboring suburbs.”

He said a key component of that is infrastructure development.

At the ward level, Taliaferro said he’s working to get street lamps repaired and trash receptacles installed to keep the streets clean.

He said plants and art projects will be installed, streets repaved and sidewalks extended to make the Chicago Avenue corridor visually attractive and more walkable.

Taliaferro said this will attract both businesses and customers, which will increase employment opportunities and lower crime.

Deputy Commissioner Harbin said Austin’s Chicago Avenue corridor was chosen to be part of the initiative because of the presence of well-organized community-based organizations and AAABNA’s Soul City Corridor branding.

Corridor managers hired by LISC will are the first point of contact for current and prospective business owners – and the driving force behind business returning to the Austin corridor.

Jake Ament, director of neighborhood network at LISC, said they need people who can “lead the technical aspects of moving projects forward along those priority corridors.

The plan is to announce corridor managers by the end of August, said Caroline Rendon, a program officer.

Baux said this ensures “that community residents as well as community leaders [have] a grassroots approach that they could use to revitalize their commercial corridor.”