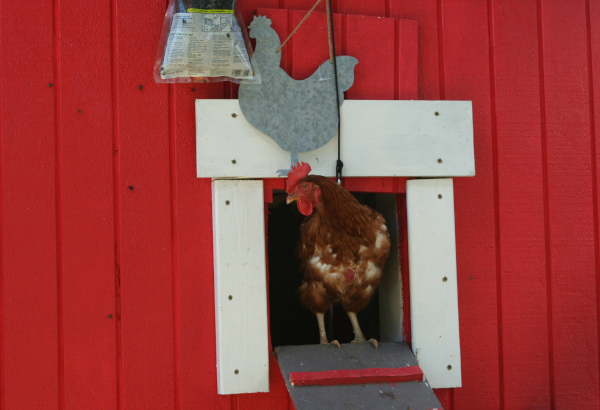 BUILD Chicago has been hosting a summer camp in Austin for youth from kindergarten to 8th with enrichment activities, peace circles, basketball and volleyball – and a small farm with some very friendly chickens.

Daniel Brown, a middle schooler who’s been participating in BUILD programs for two years, said having an in-person summer camp this year was important because “it keeps kids like me doing stuff instead of staying home and sleeping. It keeps us active.”

Without BUILD’s camp, he’d just be bored at home this summer.

Jamey Makowski, BUILD’s manager of program development, said she has a lot of experience with summer camps but never during a pandemic.

“We had to bring our young people together to give them some sort of an outlet this summer,” she said.

Normally, BUILD would host multiple camps throughout the South and West sides, some with upwards of 100 kids.

This year, the organization could host only a single camp, with about 60 kids, Makowski said.

In past years, the camps have had morning and afternoon sessions.

But this year “we realized that we would serve our young people better and get the maximum use out of the camp if we did a full day.”

Many of the kids are still dropped off in the morning, but some families are only able to come in the afternoon, and BUILD still wanted to serve them, she said.

BUILD staff did a lot of research – and a lot of reading – to understand the health guidelines from the Centers for Disease and Control Prevention and the city, Makowski said.

Jill Bradley, BUILD’s chief operating officer, said the campers were placed into groups of 10 based on age.

Each group was assigned a colored wrist band so that staff could easily ensure groups stay separated and use spaces at their allotted times.

Social distancing requirements made them reimagine how to best use the space, Bradley said.

They rented large, air-conditioned tents to use as rooms for each group of students, a previously little used field served as a volleyball court and the shade of a nearby tree was used on Mondays and Fridays for peace circles.

“Occasionally, there are challenges in terms of violent incidents. Someone did get killed a few weeks ago.”

The peace circles gave kids a safe place to discuss those difficult and painful topics and sort through their feelings.

Makowski said they wanted to bring “young people together to give them some sort of outlet this summer.

“To give the young people a safe space, to speak their truth is what we say, to just be able to be open and have some freedom to speak and express everything that they’ve been dealing with over the past few months,” she said.

The twice-a-week peace circles has been important because it gives the kids an opportunity to think through what they want to discuss in advance. It means if something happens during the week, they know there will be somewhere for them to talk about it, she said.

On the other side of BUILD’s grounds is what is officially called the garden, but Bradley said it’s really a small farm.

Carmen Scott, who leads BUILD’s enrichment program, said they started with just five chickens about several weeks ago, with the number in their “chicken mansion” quickly growing to 14.

They maximum they could have is around 30 but no roosters, she said.

In addition to the chickens, the small farm has beds with tomatoes, zucchini, lettuce and peppers.

Cortez Dean, who’s been part of BUILD for four years and manages the “farm,” said they’ve also been planting flowers to attract natural pollinators such as bees and butterflies.

“We heard about the population [decline] of bees, we wanted to help out a bit.”

They dedicated one of their beds and part of a small peace garden to flowers that specifically attract bees, and Dean said he’s interested in the possibility of creating some low-maintenance hives to help out the bee population.

CEO Adam Alonso said it it has taken nearly $300,000 to make this summer’s camp happen.

They raised the money through a GoFundMe, and Zynga Corp. kicked off the summer camp campaign, he said.

“Everyone, I think, can come together around the fact that it’s been horrible for everyone, and especially for kids in neighborhoods that are already challenged. I will gladly write my check so these kids can have a fun summer, they can get out, they can be engaged with BUILD staff,” Alonso said.