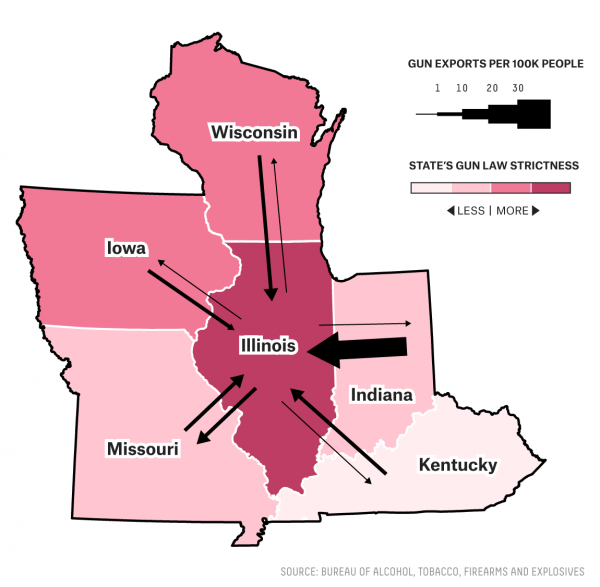 When our babies are killed by gunfire, it is true that families, neighbors and really all of us are greatly affected. What can we practically do to reduce the use of illegal guns in our communities?

About six in 10 “crime guns” seized by the Chicago Police Department originated from gun shops outside of Illinois, according to a 2017 report issued by the department and reported on by The Globe Post in 2018.

Crime guns are defined by law enforcement as those that are “illegally possessed, used or suspected to be used in furtherance of a crime.”

In about 95 percent of cases, the person found in possession of a crime gun is not the original purchaser of the weapon, the report said.

The Giffords Law Center to Prevent Gun Violence ranks Illinois’ gun laws as the eighth toughest in the country. The state requires citizens to have a permit to buy firearms and to report stolen or lost guns. Residents who want to sell their guns privately are also required to get a background check from state officials and to submit documentation of the sale.

No such laws exist in neighboring states such as Indiana, making them a target for traffickers seeking to sell weapons on the black market in Chicago.

About 21 percent of guns confiscated by police in Chicago are traced back to gun shops across the border in Indiana, a short drive from the city.

After conducting gun offender surveys and crime analysis, the CPD concluded that “states with lax gun laws like Indiana and Mississippi are a primary target for gang members and their gun trafficker source buyers.”

I strongly support this legislation as a start in the process to end the flow of illegal guns from neighboring states, especially Indiana, into the West and South sides of Chicago.

In addition, Illinois and its bordering states must work together and establish a database to track those people turning the legal purchases of firearms to weapons of mass destruction.

Gov. J.B. Pritzker could lead the formation of a compact of the six Midwestern states to protect the health and safety of Illinoisans, and we will need to work with our congressional delegation to achieve the consent of Congress for this compact.

Gun violence is something that impacts all of us directly or indirectly, and it will take all of us working together to save lives in Chicago. Let’s stop gun running from Indiana and other states NOW.