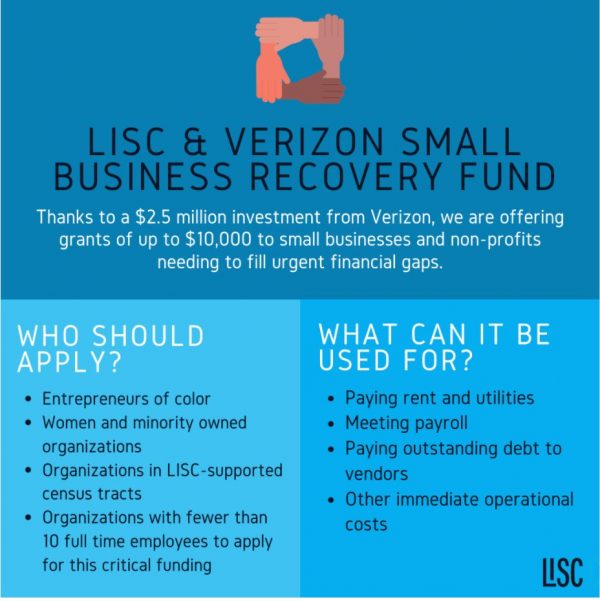 Applications for the third round of small business relief grants being distributed through Local Initiatives Support Corp. (LISC) and funded by Verizon closes Wednesday at midnight.

In the first round, RAZE Up Grooming Lounge , 520 S. Laramie Ave., received a $10,000 grant through the Verizon Small Business Recovery Fund. In all, 14 of about 200 grants awarded, totaling $140,000, went to Chicago businesses in the first round of funding.

Meghan Harte, executive director of LISC in Chicago, said there’s no specific criteria, and she encouraged businesses to “just apply.” Harte, wanting to keep that momentum going, hopes more than 40 Chicago businesses will have received a grant by the end of the program.

LISC is doing all it can to support small businesses, “so that they can weather the storm,” she said.

Targeted grant programs are important because of the myriad issues small businesses have faced getting federal loans during the COVID-19 crisis.

In April, CBS reported that up to 90% of businesses owned by people of color either had been, or were at high risk of being, shut out of the Small Business Administration’s Paycheck Protection Program.

Malcom Crawford, executive director of the Austin African American Business Networking Association (AAABNA), said the government’s decision to let private banks handle the loans was a problem since many businesses owned by people of color don’t have a relationship with the banks SBA used to distribute the PPP money.

Those banks took the approach “if you don’t have a banking relationship with us, we won’t consider you,” said Crawford, who noted that only a few businesses that belong to the AAABNA have been able to get PPP funding.

With concern mounting about the lack of funding for minority-owned businesses, Earvin “Magic” Johnson’s EquiTrust Life Insurance Company has partnered with MBE Capital Partners, a Latinx-owned company, to offer $100 million in loans to small businesses owned by women or minorities.

“We knew why the money was gone and couldn’t trickle down to small businesses, especially small minority businesses, because they didn’t have those great relationships with the banks,” Johnson told the Wall Street Journal. “This is, when you think about it, life and death for so many business owners. They have nowhere else to turn.

Crawford said programs directed specifically at minority businesses offer hope, and right now, “to be able to hope is tremendous.”