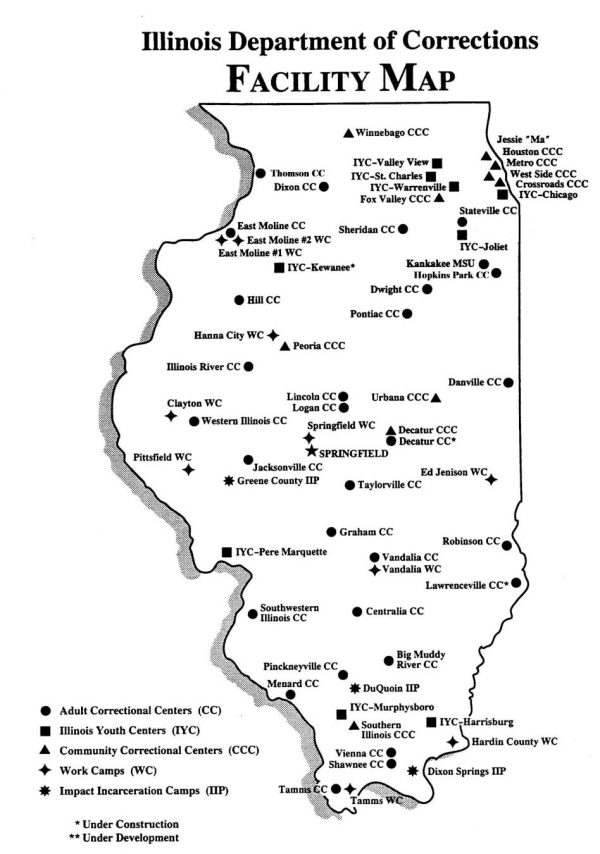 Carolyn Rogers wishes her fiance, Brandon Caudle, was home with her in Chicago rather than incarcerated at Lincoln Correctional Center.

She had expected Caudle to be home by now – and facing a much lower risk for exposure to the coronavirus – but she says confusion over when his nine-year drug sentence ends has kept him in prison.

Rogers is especially worried about her fiance being at Lincoln since a recently released inmate died of COVID-19 just days after leaving the minimum-security prison in central Illinois.

On Monday, the state’s top health official announced that an inmate from Stateville Correctional Center has died and 12 other prisoners have been hospitalized and are being treated for the coronavirus, with several of them on ventilators.

“We’re both feeling panicked, because I’m stuck at home without him and he’s in there around so many people,” said Rogers, a 2nd grade teacher at a South Side charter school. “They don’t have access to the supplies that we do to protect themselves.”

She said Caudle – who shares a large dorm-style room with dozens of other men – has been able to buy soap and wipe down the area around him as best he can.

But the prison isn’t providing hand sanitizer, and the only way inmates can get items like soap and bleach is to purchase them, Rogers said. The couple didn’t know that a former Lincoln inmate had died of the coronavirus until told by a reporter, and learning the news in that way concerned Rogers.

Prison officials “need to take this seriously” and “they should be honest with the inmates if anything does happen,” she said.

A spokeswoman for the Illinois Department of Corrections did not respond to an email or call for comment.

But at a press conference Monday, Dr. Ngozi Ezike, director of the Illinois Department of Public Health, said staff are having their temperatures checked each day when they enter the prison where they work. And facilities with a confirmed case of coronavirus are being placed on lockdown.

Staff and/or inmates at seven facilities – including at the North Lawndale ATC – have tested positive for COVID-19 and there are 187 pending lab results, according to the state corrections department.

State Rep. La Shawn Ford says over the last 10 days he’s heard from more than 500 people with love ones confined to one of the state’s 50-some correctional facilities and are concerned about their relatives being in such tight quarters in the midst of a pandemic.

The Austin lawmaker plans to compile their stories and share them with Gov. J.B. Pritzker and prison officials with the hope of getting at least some of them released early.

“You could let people out who are near the end of serving their sentence. If they’re six or eight months out” from completing their sentence and have family members willing to take them in, why not release them now? Ford asked.

Norris said her son, who is in prison because of a parole violation, has asthma and is scared to be near people who are coughing.

“I know that a lot of people are not taking this virus seriously, so anything I can do to help him be released and come home to his family I’m doing,” said the Garfield Park resident who runs a foundation in memory of two other sons she lost to violence in 2012 and 2014.

“I just need him to come home to his family who loves him. … I need him to get back here and help me with my foundation, and keep him busy.”