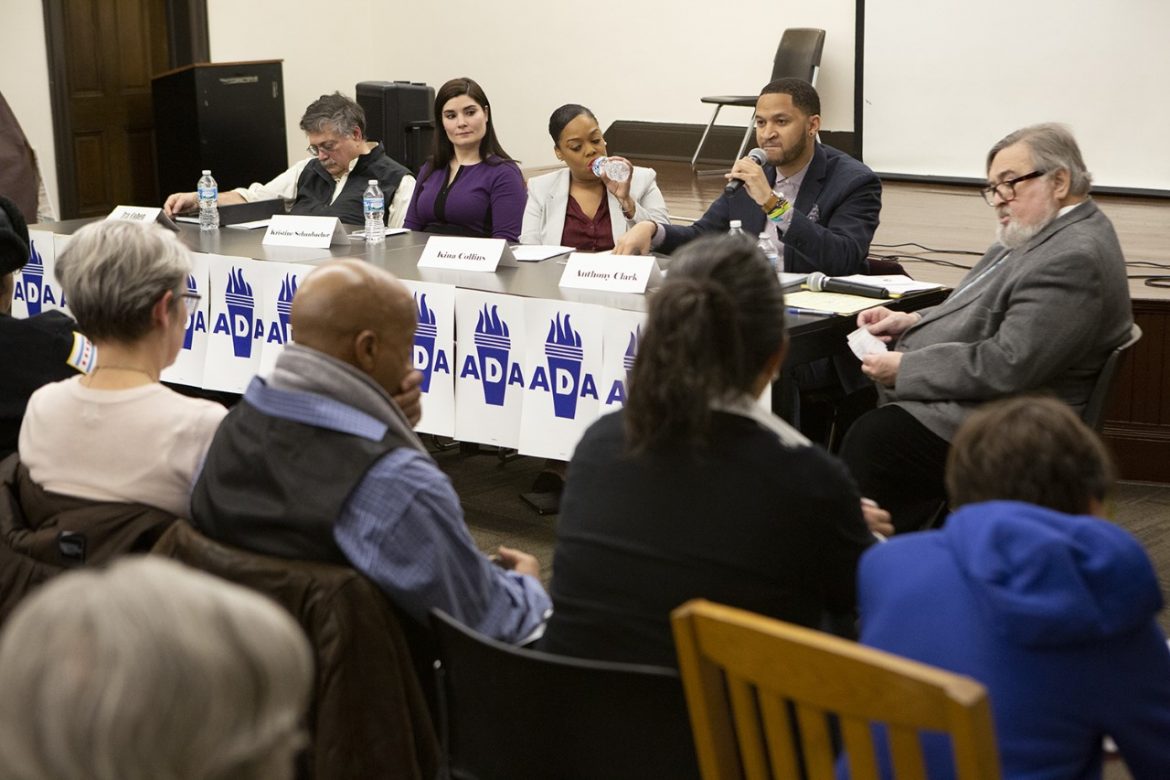 Three of the four Democrats running for the 7th district congressional seat in this year's primary participated in a forum last week. From left to right: Kristine Schanbacher, Kina Collins and Anthony Clark. Congressman Danny K. Davis was absent. | Photo by Justin Anderson

Three of the four candidates wanting to represent Austin and the rest of the 7th District in the U.S. House discussed a range of issues last week at a forum held in Austin.

Though incumbent Rep. Danny K. Davis was a no show, high school teacher Anthony V. Clark, healthcare advocate Kina Collins and attorney Kristine Schanbacher participated in the forum, which was organized by Americans for Democratic Action and Northside Democracy for America.

About 50 people attended the two-hour event, which was held at the Austin branch of the Chicago Public Library, 5615 W. Race Ave., and moderated by Richard Means, chairman of Americans for Democratic Action-Northeastern Illinois.

With college-aged students making up a significant population of the district – which includes the downtown campus of DePaul University, Roosevelt University, Robert Morris University, School of the Art Institute of Chicago, City Colleges of Chicago and Columbia College Chicago – the candidates discussed student loan debt, among other issues.

Schanbacher, who has significant student loans from attending Northwestern’s law school, said interest rates on loans can be “predatory” and thinks schools need to scale back tuition rates and explore free college options.

Collins said she endorses Democratic presidential candidate Bernie Sanders’ proposal to  eliminate student loan debt because she believes alleviating the financial stress of repaying student loans would allow people to make other purchases like houses and stimulate the economy.

Also in favor of forgiving student loan debt, Clark said he believes a shift from private to public for universities and colleges may need to happen once Medicare for All is put into place because there will be a demand for health care professionals.

All three challengers were asked why they should replace Davis, who has represented the 7th District since 1997.

Acknowledging the difference in age and how younger individuals invoke change, Ira Cohen, Davis’ director of communications and issues, talked about the congressman’s 40 years of progressive political history. “It takes a lot of skill and patience to build a movement,” Cohen said.

Schanbacher, who lives in Streeterville, acknowledged Davis’ history as a congressman but said he is one of the most absent members of Congress. She highlighted her own victories, such as securing asylum for a transgender woman who was about to be deported to Mexico and reinstating wrongfully terminated food benefits for the poor.

Collins, an Austin native, reassured West Side residents that if she wins, she will stay in Austin because it’s important to be close to the issues and be hands on.

Collins said her experience at Louisiana State University, where she worked as a regional organizer for gun violence prevention and criminal justice reform, makes her qualified to write, pass and be involved in important legislation.

Clark, a teacher at Oak Park and River Forest High School an an Air Force veteran, discussed raising thousands of dollars for the Austin Community Family Center and being a gun violence interrupter, work that stems from him being shot and losing 12 students to gun violence over the past 11 years.

Later in the forum, the candidates asked what they would do about the lack of adequate child care.

Cohen said the congressman favors free public education for every child from kindergarten through high school and mentioned H.R. 4768, the Home Visiting to Reduce Maternal Mortality and Morbidity Act.

Schanbacher expressed concerns about the country’s decreasing maternal mortality rates and said paid parental leave should be required at the federal level and there should be  better maternal health care.

Collins said her top priority would be increasing child care and educating children sooner through free universal pre-K. She said her work on the Illinois Council on Women and Girls – and H.B. 5544 – helped legislators listen to the voices of the working-class, immigrants, and the trans and non-binary community.

Clark said he supports universal pre-K but also said basic needs like free breakfast and lunch are necessary for children who are food insecure or live in food deserts. He noted that funding public school systems through property taxes is inequitable, hurting neighborhoods like Austin.

Clark suggested Rep. Davis may not have the best intentions for child services when he referenced a YouTube video from 2009 where the congressman is shown in a backroom meeting with then-Secretary of Education Arne Duncan talking about school closures on the West Side.