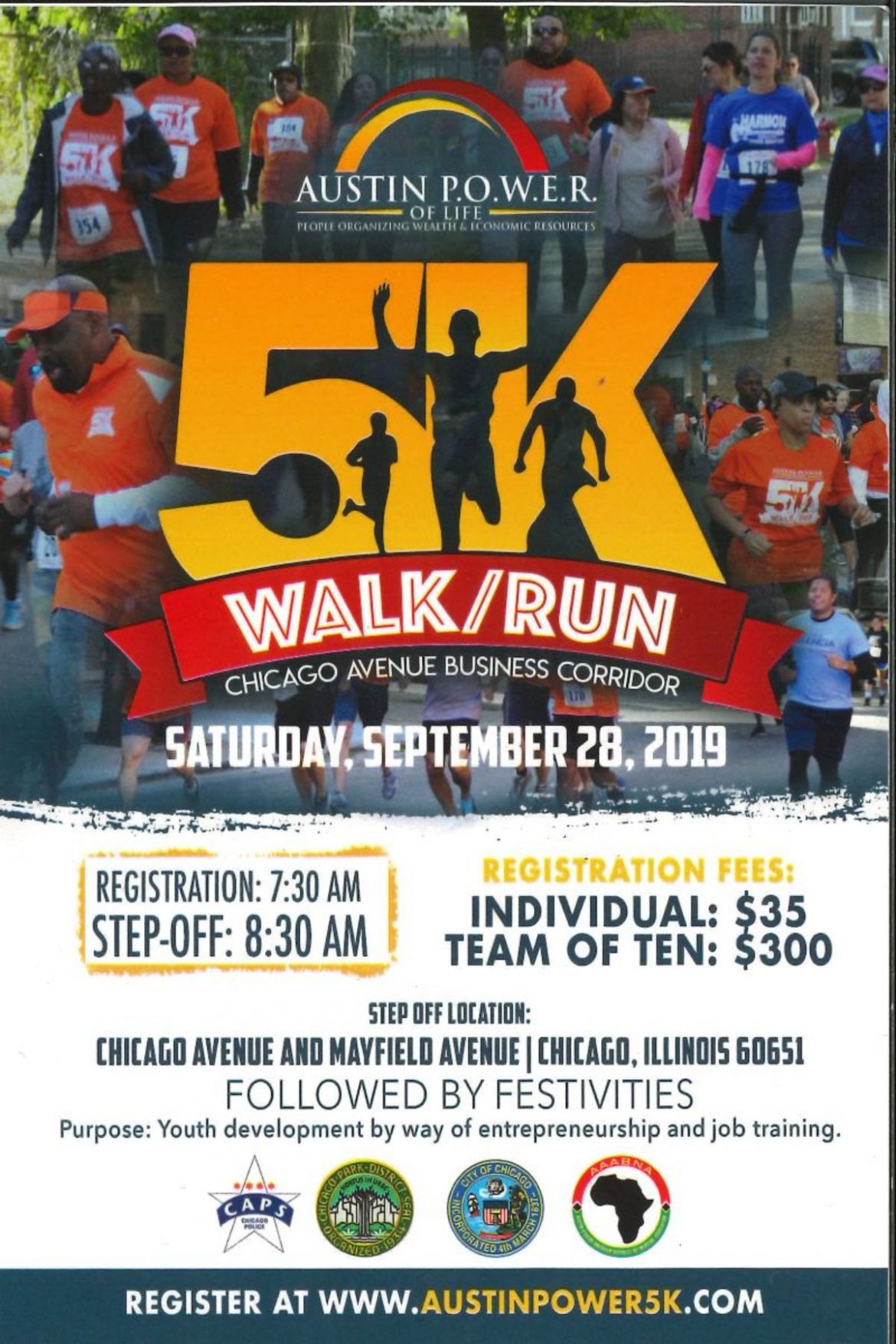 Registration is still open for Saturday’s Austin POWER 5K – and organizers hope to surpass 700 participants for the fifth annual event.

Interested walkers or runners can register in person on Friday at 5840 W. Chicago Ave. until 5 p.m. and on race day beginning at 7 a.m.

This year’s event will feature a new youth “fun run” for children ages 10 and under that will be held before the 5K race, which starts at 8:30 a.m.

A number of groups and businesses, including Loretto Hospital, 645 S. Central Ave., and New Moms, 5317 W. Chicago Ave., will be taking part in the event as well as offering their services during the walk/run.

“We at Loretto hospital are very interested in better [and] healthier outcomes for the community,” said state Rep. Camille Y. Lilly, who serves as the hospital’s chief external affairs officer. She has her own group running as “Team Lilly.”

The non-profit hospital will also field “Team Loretto.”  The hospital will offer health care screenings and first aid during the 5K.

“We [are] going to be taking people’s blood pressure and just [offering] them a good feeling after doing this exercise,” Lilly said. “We want to give them that information so after they walk and check, they feel better as well.”

New Moms, which supports young mothers experiencing poverty, will offer information near the start of the race and have a water station right outside their Chicago Avenue  location.

“We want to be a good neighbor and support activities that are happening here,” said Jenna Hammond, director of development and communications at New Moms. “We also put our team together to support the work of New Moms and invite people to come out to see where [we’re located].”

Austin Coming Together and Hope Community Church also will be fielding teams, as reported earlier this month by AustinTalks.

Streets will be closed along the route, which begins at the corner of Mayfield and Chicago avenues; walkers/runners will first go south on Mayfield to Race Avenue; then east on Race to Menard Avenue; back north on Menard to Chicago; east again on Chicago to Lamon Avenue; and finally west on Chicago Avenue to the finish line.

Other closures will include the intersections of Chicago and Central and Chicago and Laramie; the CTA #66 bus will be temporarily re-routed Saturday morning.

“I want to encourage our residents, particularly in the 29th and 37th Wards but from all over the city, to come by and take part in this,” said 29th Ward Ald. Chris Taliaferro.

Along with his staff team, “Team 29,” Taliaferro will be walking in the event to highlight Austin businesses that operate along the Chicago Avenue corridor.

“I’m very proud every year to have it hosted in our wards, and it’s an event that we all look forward to,” Taliaferro said.

Cost the participate in the 5K is $20 for youth 17 and younger, while adult participants will pay $35. Groups of 10 who register together as a team will pay $300. The fun run is free.