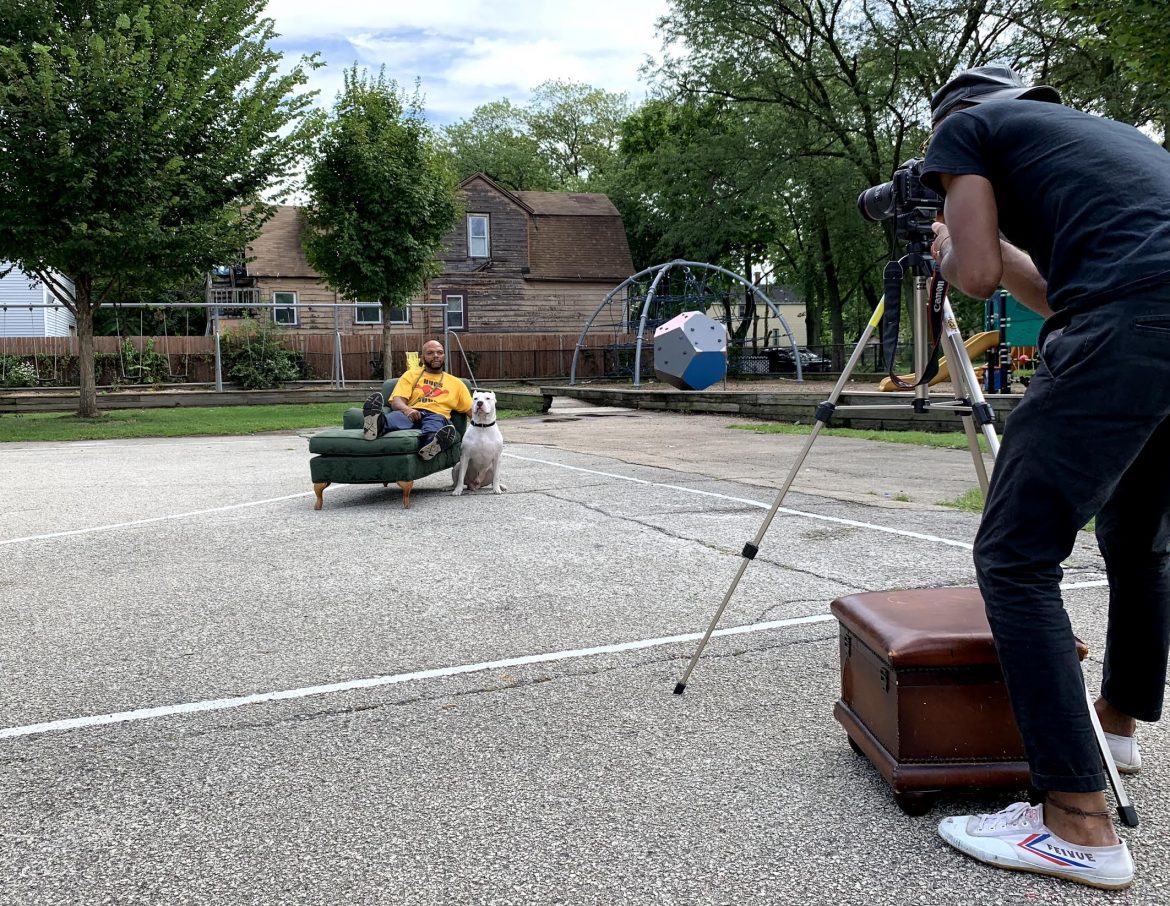 Anthony Mitchell and his dog pose for a portrait earlier this month at Hubbard Park.

Shane Eubank was walking past Hubbard Park earlier this month when some people caught her attention. They had set up at the park, at 4942 W. Hubbard St., to take photos of local residents as part of a project to show a different side of Austin.

The photo project, undertaken by the local non-profit Alt Space Chicago offers everyday people the opportunity to have professional photographs taken that will be lated displayed across Austin.

Along with a free photo to take home, participants received a questionnaire asking them questions like what they would like to see change in their neighborhood and what the word “community” means to them.

“I’d be open to seem more events like this in the neighborhood. Give kids an opportunity just to figure out what they want to do, career-wise,” Eubank said after getting her photo taken.

Some residents who stopped by Hubbard Park didn’t know what was going on but still got in front of the camera.

“It was a real experience because there’s a lot of photos that go untold here, and for me to give a photo, it felt comfortable,” said Austin resident Carlitos Jackson, 47, who is a realtor.

For other residents like Gloria Hays, 80, a retired CPS paraprofessional, she didn’t plan on coming to the park until canvassers from Alt Space Chicago handed out flyers around the neighborhood.

“You know what? I would want to see everybody together [here] because now all we have are these teenagers walking the street, doing nada,” Hays said.

One of Alt Space Chicago’s founders, Austin native and artist Jon Veal, 26, said the project has already been a success: “First and foremost, I think we [have] already won because we’re present.”

Before the weekend of picture taking had begun, Veal said, “We’re going to be present whether one or 50 people come out … that’s a success for us, just being able to give back.”

Veal and co-founder Jordan Campbell, 28, started Alt Space Chicago as an alternative platform for people in communities to get involved and have their voices heard. The two met as disciples of the Chicago Church of Christ and founded the nonprofit two years ago.

“This is also a form of documentation,” said Campbell, an Akron, Ohio, native. “This is a way of us archiving and having people represented in a different light because a lot of time we’re seeing [other] photos in the media.”

Vanessa Stokes, an Austin resident and co-founder of Front Porch Art Center, said it’s important for a community to create a narrative that is a reflection of what’s happening.

Stokes manages the photo archives of her late father, Dorrell Creightney, a collection more than 300,000 images of artists, musicians and everyday people taken across the city. Two years ago, 17 photos from his archive were installed near the Laramie CTA Green Line station and at the Kinzie/Laramie stop on the Union Pacific West Metra Line.

“As for the project I worked on with my father’s [archive], I see Project Stamp as an extension of that,” Stokes said.

Alt Space Chicago is partnering with Austin Coming Together to roll out phase two of their Project Stamp campaign in October, which involves displaying the images on abandoned buildings close to where the photographs were taken.

“We’re expecting to help and support them through making more installations and picking spots to install the documentation that they’re taking,” said Chris Banks, the micro-market recovery program coordinator at ACT.

“Anything we can do to change the narrative of Austin, we’re for.”