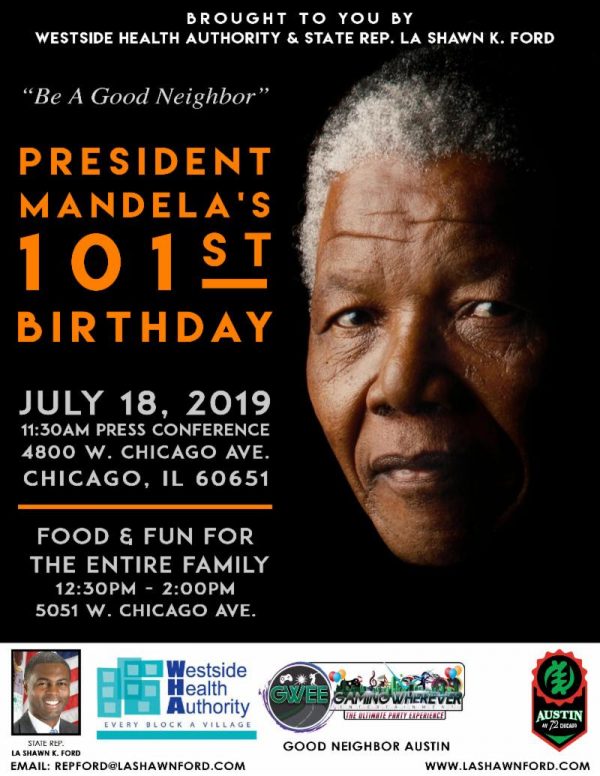 State Rep. La Shawn K. Ford will host the sixth Nelson Mandela birthday celebration today, July 18. Thursday’s event is being held to raise community support to halt violence on the West Side, connect people to resources and strengthen relationships.
Nelson Mandela International Day was launched in recognition of Mandela’s birthday on July 18. It was inspired by a call the South African leader made for the next generation to take on the burden of leadership in addressing the world’s social injustices.
“Mandela stood for peace, and with violence high in the Austin community, we will celebrate President Nelson Mandela’s birthday and the sixth anniversary of the naming of Mandela Road with a day of service,”  Ford said in a statement.
To honor Mandela – a Nobel Peace Prize winner and the first president of post-apartheid South Africa –  Ford introduced Illinois House Joint Resolution 89 in 2014 designating the portion of Cicero Avenue from Grand Avenue to Roosevelt Road as Mandela Road. The resolution passed both the House and the Senate in unanimously. The dedication of the naming of Mandela Road occurred on July 18, 2014.
Thursday at 11:30 a.m., a press conference will be held at 4800 W. Chicago Ave., with a public celebration to follow from 12:30 to 2 p.m. at 5051 W. Chicago Ave.
Partners in commemorating Mandela include: The Good Neighbors Campaign, Westside Health Authority, The Loretto Hospital, Chicago Public Schools, Market 72, Habilitative Systems Inc., Chicago Park District, Chicago Urban League, Bobby E. Wright Comprehensive Behavioral Health Center and Illinois State Police.