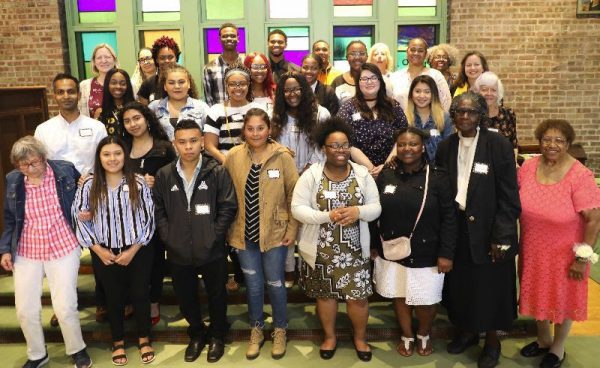 Twenty-one Austin high school seniors were receiving scholarships worth $1,000 each; this is the 45th year the church has awarded scholarships. Since the church started the scholarship program, more than 500 students have received the awards.

Scholarship recipient Lamaria Johnson, a Michele Clark Magnet High School senior and 2019 Posse Scholar, said over the past four years she has absorbed information that will assist her in moving forward to college. Johnson plans to attend Denison University.

“I have gotten to know each winner here very well, and I have realized that through the ups and downs we always triumph,” Johnson said.

She added that high school students should not be afraid to reach out and ask for help, and that it may not seem like enough at the time but someone will appreciate it.

It’s students like this that have made being involved in the church’s scholarship program so rewarding for Matthews. She’s been part of the scholarship committee since 1974 and will be leaving the committee this year after 45 years; she was joined on the committee by co-chair Roberta Wilson.

“I have tried to quit many times, but I have a passion for young people,” Matthews said. “The future is up to you; give it everything you have and you will not regret it.”

Wilson said she has been bugging Matthews for years to get a large number of students to apply for the scholarship. This year, 35 students applied.

“I did not have the same opportunity as these students do today,” Wilson said. “If I could continue to help young people, my life will not be in vain.”

Wilson, who’s 92, said she plans to continue serving on the scholarship committee because the work helps build the community and lift up young people.

Wilson said students are based on their GPA, ACT scores and activities/extra-curriculars they take part in. The number of winners each year depends on how much money the committee raises throughout the year. The money comes from donations from a number of churches, organizations, private donors and fundraisers.

“When all of you go off to school, do not forget us and do not forget to tell people where you received your scholarship,” Wilson said. “I want you to encourage those around you to do as you have.”

Third Unitarian Church Pastor Colleen Vahey has been with the church for over a year; it was her second time honoring the Austin Scholars Award recipients. She said it is a tremendous tradition to support the students.

Another recipient of the scholarship, Javaris Wiggins, said receiving it has shown him he is on the right path and doing the right thing for his future. The John Marshall Metropolitan High School senior will attend Alabama A&M University in the fall on a basketball scholarship.

“Getting the scholarship means a lot to me,” Wiggins said. “It is good to know people support me and are proud of my accomplishments.”

This year’s scholarship recipients are: