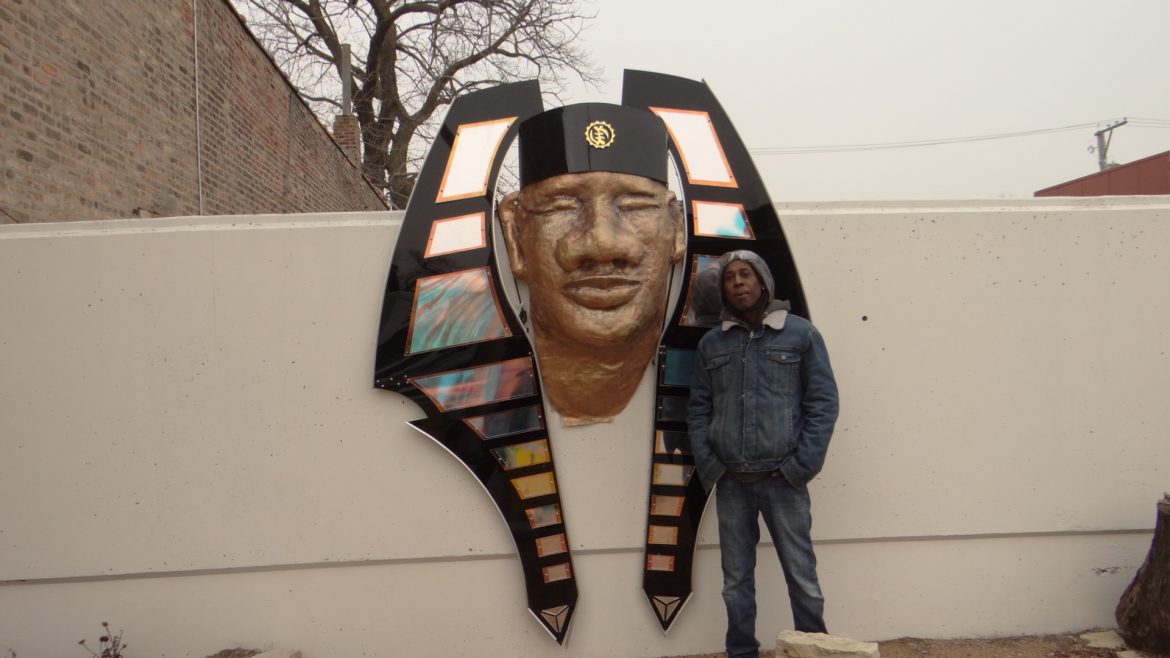 Artist Keith Brownlee standing near the statue of Aretha Franklin he created.

AV 72 Chicago welcomed Austin residents to be a part of another art installation along the Chicago Avenue corridor on Thursday, the last day of Black History Month.

A statue of Aretha Franklin was unveiled on 4922 W. Chicago; it was created by Austin artist Keith Brownlee. The event included performances by Windy Indie Violins and spoken word by B’Rael Ali.

This is Brownlee’s first project with a non-profit, and he “loved” being involved because the art installment is within his community.

“I like that the people of the community like it, and it is something for them … it’s something fun,” Brownlee said.

AV 72, a 2-year-old organization located in the Special Service Area (SSA), is working with Westside Health Authority to bring more economic development and artistic expression to Austin that represents the African-American culture.

“I wanted to create images where people from this community saw what inspired them, to recall a sense of cultural pride,” said Yemisi Dinkins, AV 72’s program director.

Dinkins said many in Austin are excited about changes the organization has brought in the last two years.

“We got a king on Chicago Avenue, and now it’s time for us to get a queen,” Quiwana Bell, chief operating officer of Westside Health Authority.

“This is historically an African-American community, and there is really no way that you can know that other than you seeing black folks walking around,” Bell said.

AV 72 Chicago and Westside Health Authority gave overviews of the initiatives they have underway to help young people launch their businesses on the same stretch of Chicago Avenue. Their programs include entrepreneurship classes, landscaping initiatives and supporting small businesses in the area.

So far, about 30 young people have participated in the entrepreneurship program.

“AV 72 is working really hard to create opportunities on Chicago Avenue to create more businesses so that there is more to create beautification in the SSA fund,” said Vanessa Creightney Stokes, creative consultant for the AV 72.

Stokes said the beautification of Austin will encourage residents to come out on the streets, which in turn will help make the West Side bustling and lively.

Essie Martin, an Austin resident who is also founder of Black Workers Matter, said she has seen a big change since AV 72 Chicago started their work in the area.

“The crime rate has tremendously gone down because they are working with young people and having events like today to help people know their neighbors more,” Martin said.

Jamaica Grill, 44, a restaurant owner in the community, said AV 72 organizes block parties and other events that bring the neighborhood together. In the last 10 years he has not seen his community like how it is today – that’s a a sign of growth, he said.

“Beautifying and putting up new businesses on these blocks will help the members of community apply for jobs and have a positive influence on the younger people,” Grill said.

Dinkins said her vision is to develop a cultural chord that would run along the Chicago Avenue, where people will see a vision of themselves.

“We are not the first, but we are shouting the loudest about who we are and our appreciation of ourselves.”