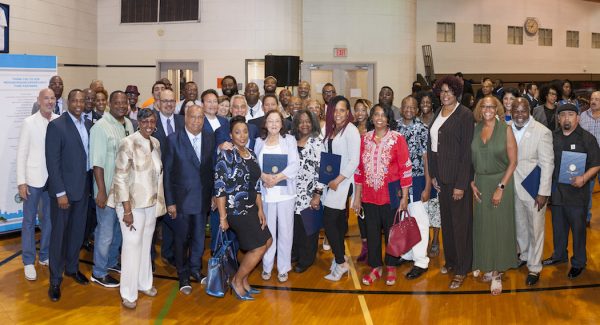 She opened her third store recently at 4800 W. Chicago Ave. with the help of  a $120,450 grant from the Neighborhood Opportunity Fund, and there was an outpouring of support from the community.

“A 79-year-old woman came into the bakery after receiving a slice of cake [from friends] and said she has been praying for me to open my doors,” Hart said.

Her business was one of five in Austin to recently receive a grant from the city in a third round of funding. Businesses can receive up to $250,000.

The other four to be awarded grants were:

Prentiss Harris, owner of Chubby’s Char House, said he’s looking forward to using the funding to open a restaurant that will sell hamburgers, hot dogs and tacos by the end of the year.

The grant gives him the opportunity to do what the 24-year Austin resident has always wanted: open a business.

“We’re still in the beginning process, so we’re getting the documents that they need,” Harris said. The grant “will give us skin in the game as a new business.”

“We have been pushing people to focus on particularly entrepreneurs of color and what they need and the issues of access to capital [to make] an impact on their block and their neighborhoods,” Kotak said.

Craig Chico, a member of the Neighborhood Opportunity Fund Advisory Committee and president and CEO of Back of the Yards Neighborhood Council, said the committee looks for new businesses that have traditionally been left out of government funding. They want to give people opportunities to qualify for traditional lending sources, such as banks, that might not otherwise be available, he said.

“We’re able to loosen the boundaries a little bit and give people a real opportunity that traditionally don’t get those opportunities,” Chico said.

While there have been successes with the program, some businesses have had trouble coming up with the money upfront, he added.

Malcolm Crawford, executive director of the Austin African American Business Networking Association Inc., said he’s seen some businesses struggle to get loans from banks in order to obtain the grant.

“The whole objective is to get people who never had the opportunity an opportunity to grow,” Crawford said. “But the banks are coming in to say, ‘Hey I need your firstborn’s DNA type.'”

There has been a challenge getting businesses lenders to participate, Kotak said, who added she’s been working with lenders who are thinking creatively about their underwriting and shifting their lending rules to make it easier for businesses.

“We really try to wrap our arms around all of our grantees to really help them,” Kotak said. “So that has been everything from permitting to licensing help to trying to get lenders engaged.”

Once the grants get to the businesses, it’s reinvigorating, recreating and reenergizing neighborhoods, Chico said. With people being able to work and shop in their own community, it improves the quality of life, he said.

“The heart and soul of the entrepreneurs that I’ve met are the core and the fabric of the city of Chicago,” Chico said. “And if we don’t take care of those people in those neighborhoods, then we’re not taking care of our city.”