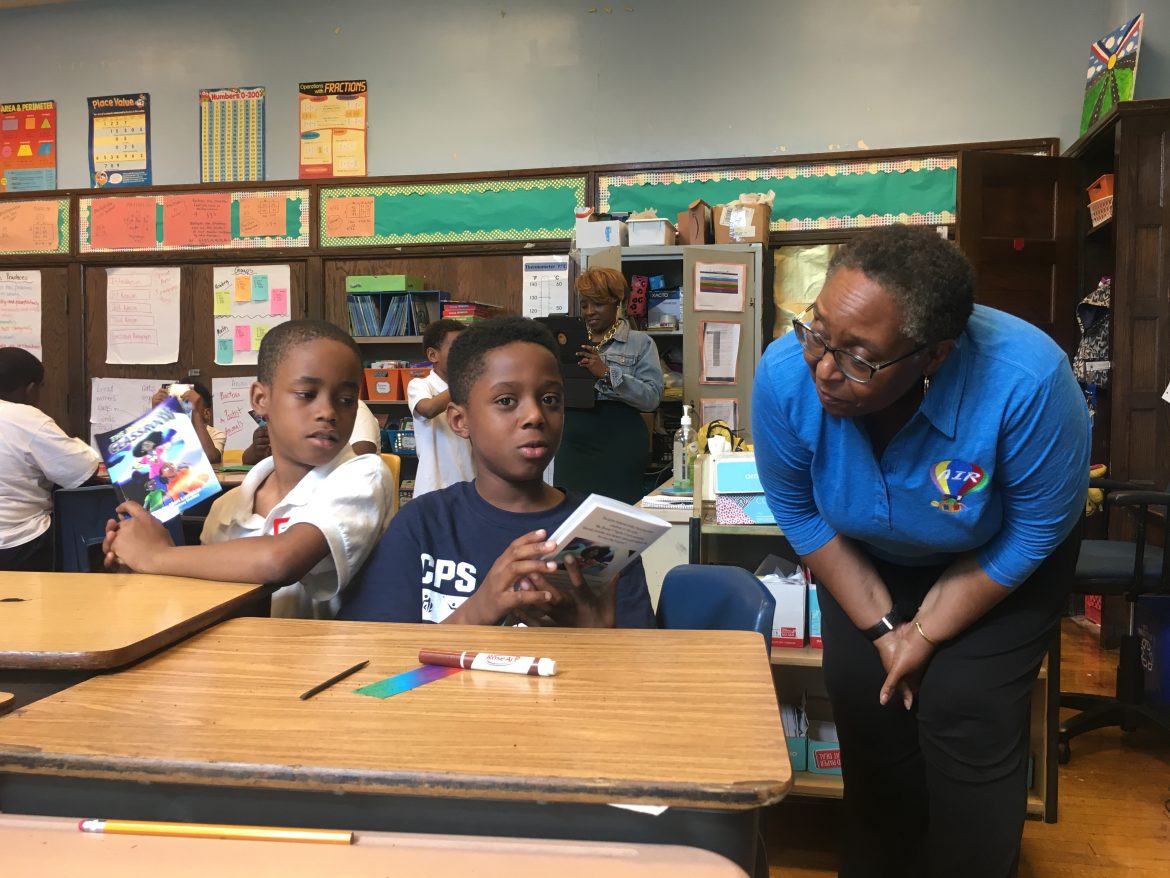 Author Mari Barnes was met with gasps when she unveiled her new book to Bertina Booker’s 4th grade class.

The author had agreed to write a book starring the 23 students after visiting their class at Ella Flagg Young School a year earlier to discuss the art of storytelling.

“I just found my mouth saying yes,” said Barnes, 62, who remembered sitting in her car after promising to write the book, thinking, ‘What have I just agreed to?’

Booker’s students wanted a story about students trapped in a building, disappearing one by one, which would feature flying stuffed animals, a ghost janitor and all 23 of their classmates. They also provided the title, The Magnificent Classroom.

“I like the book because it got everybody in it, and it got the teacher,” said Jarrell, one of Booker’s students.

Barnes and Booker met at a house music retreat hosted by DJ Derek “Smokin’” Jones, in Galena, Illinois. After several months of Facebook communication, Barnes offered to donate some of her books to the Ella Flagg Young library and to speak to Booker’s class.

Barne’s self-publishing company, Flying Turtle Publishing, has since become one of the house retreat’s sponsors.

“I was really a lousy publisher,” said Barnes, who lives in Hammond, Indiana. “Your main focus as a publisher is to sell books, and I kept coming up with ways to give them away.”

Barnes focuses more of her energy now on a program she runs called Adventures in Reading, which hosts after-school programs aimed at engaging children in reading.

This is Booker’s second year teaching the same group of students, along with a few additions who transferred from other classes. The move up to 4th grade with them, though untraditional, was done at her request.

“We move like a family,” she said. “I know what works and what to say to them … Even the parents, they call me on the phone for anything … I’m like their aunt.”

Booker said her biggest challenge is keeping the students motivated. She tries to develop unique ways to engage her students in their curriculum. A geometry lesson once involved making a YouTube dance video called “Triangles, Angles and Transformation Slide.”

Of Barnes’ first visit, Booker said, “it really has started them with a love for writing … They started their own journaling process. They love that she listened to their ideas.”

Before Barnes’ visit, Booker said she had some success engaging students with literary chapter books, particularly the book “Wonder,” which is about a young boy with facial disfigurement.

Three students said “Wonder” was their favorite book. “We are a ‘free lunch school,’” said Booker, “so you have some of those [economic] issues, you have family issues. You find yourself playing a lot of psychologist.”

Barnes said she enjoyed writing a book that allowed Booker’s students to “see that their ingredients could go in a story and to kind of give them the freedom to know that they could come up with any idea and be able to tell a story about it.

“And I wanted them to see their names in a book because that’s just cool.”