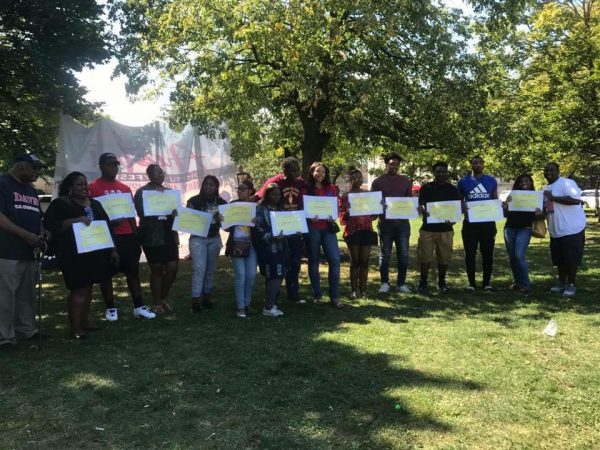 Greater St. John Bible Church reached a milestone this summer with its annual scholarship award giveaway to college students.
The money raised this year pushed the church to just over $300,000 raised since the scholarship’s inception in 2001.
A total of $11,500 was donated this year for 21 college-bound and returning students.
“It’s about promoting family, and encouraging and inspiring young people to pursue their dreams in education,” Rev. Ira Acree told AustinTalks.
“It’s important that we invest in futures and not funerals,” Acree said in a statement. “Promoting and investing in education is the most proactive and efficient approach in combating gun violence and bettering our neighborhoods.”
Of this year’s 22 recipients, most received $500 each, while two received a $1,000 scholarship.
The selection process included a written essay and maintaining a minimum 2.5 grade point average. The scholarships, Acree said, are not just for high academic earners but students with B and C averages.
Greater St. John have given out awards the last 16 years during church-sponsored events, such as its fall Gospel Concert showcase. This year’s awards were presented during the church’s summer community festival last month at La Follette Park. Acree estimated the event drew around 700 people.
Scholarship donors included church members and community organizations. One particular donor has a long family history of business and philanthropy in Chicago.
Terri Gardner of the Soft Sheen cosmetics company donated to the scholarship for the second year. Her parents, Ed and Betty Gardner, started the company in their South Side basement home in 1964.
Serving the traditionally untapped African-American market, the company has grown financially and in popularity in the black community. Upon its sale to cosmetics conglomerate L’Oreal in 1998, Soft Sheen had sales of just under a $100 million.
Gardner served as president of the company at the time of its acquisition, and has since focused on family and philanthropy. She met Rev. Acree last year while working on violence issues on the South Side.
“He let me know about his program and his church, so I tried to support it again this year,” Gardner said, adding that giving back to the community runs in her family.
“With my parents being role models growing up, at every level they were at, they found a way to give back,” she said. “It wasn’t when Soft Sheen became a $50 million company that they began connecting with the community, it was always something, even when we didn’t have it.”
Award recipients and college
Dimetrius Abbott: Illinois State University
Lisa Bilal: University of Illinois at Urbana-Champaign
Tralese Campbell: Lakeland University
Chasty Colbert: Malcolm X College
Taqori Halliburton: Northern Illinois University
Niyah Hudson: Bradley University
Carolyn Johnson: University of Illinois at Chicago
Darius Johnson: Northern Illinois University
James Johnson: Lewis University
Kendall Jordan: Illinois State University
Rhonda Lewis: Malcolm X College
Courtney Lilly: Illinois State University
Marquan Morrison: Clark Atlanta University
Ariel Morrow: Western Illinois University
Jamille Newson: Lakeland University
Brianna Patterson: University of Illinois-Springfield
Jermesha Striblet: Bradley University
Tara Thomas: John Marshall Law School
Tamara Thomas: Fisk University
Paradize Wallace-Brown: Lakeland University
Donte Washington: Illinois State University