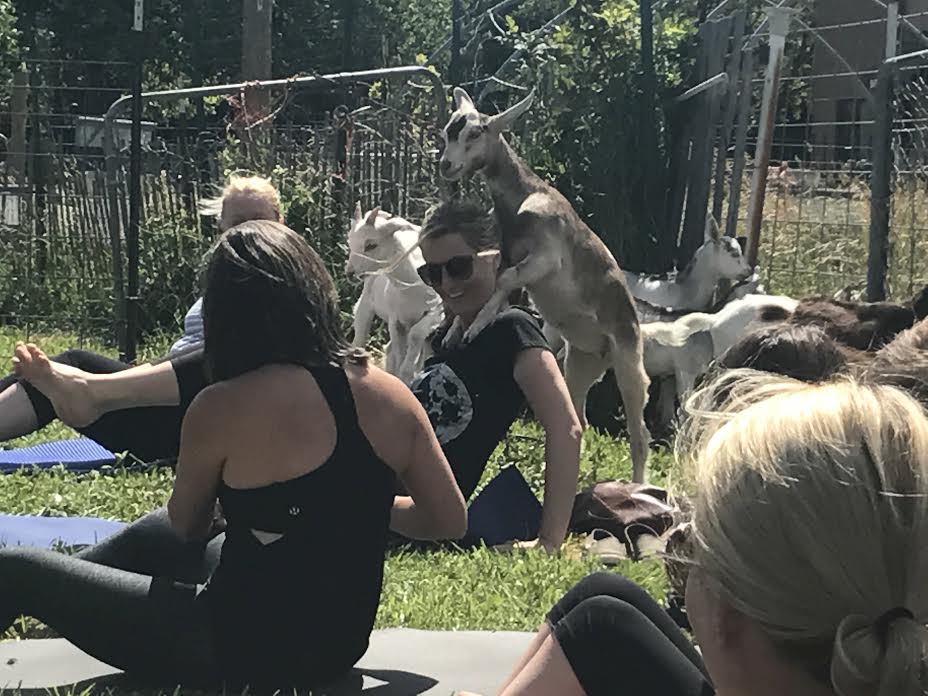 Austin farm co-owner Carolyn Ioder has her own philosophy when it comes to goats and what they can bring to the community – fresh dairies for sure, but also new perceptions of the neighborhood and better integration on the West Side.

“Goats are useful for four things: milk, meat, mulching and memories,” said Ioder, who was collecting maple leaves to feed a dozen baby goats as they wandered among about 15 people doing yoga on a recent Sunday morning at GlennArt Pasture in the 400 block of North Waller Avenue.

“It’s a very pastoral peace process – a bringing together of people and communities to look at the West Side differently.”

Last month’s goat yoga session was the first of four being offered this summer by Ioder, who launched GlennArt Farm at 5749 W. Midway Park six years ago with her husband, David, and Oak Park yoga instructor Andrea Lissuzzo.

The farm and pasture, which provide fresh goat milk, eggs, homemade cheese and honey to the community, are open to the public usually twice a year, attracting visitors from the West Side and across Illinois who like to pet and feed the goats.

But Ioder decided to do something special this summer after she came to know the concept of goat yoga earlier this year. The first yoga session was held in the pasture during Goat-A-Palooza June 10, when a total of about 40 West Side residents turned up to play with the goats and practice yoga.

The event also included a naming contest for the 12 baby goats. 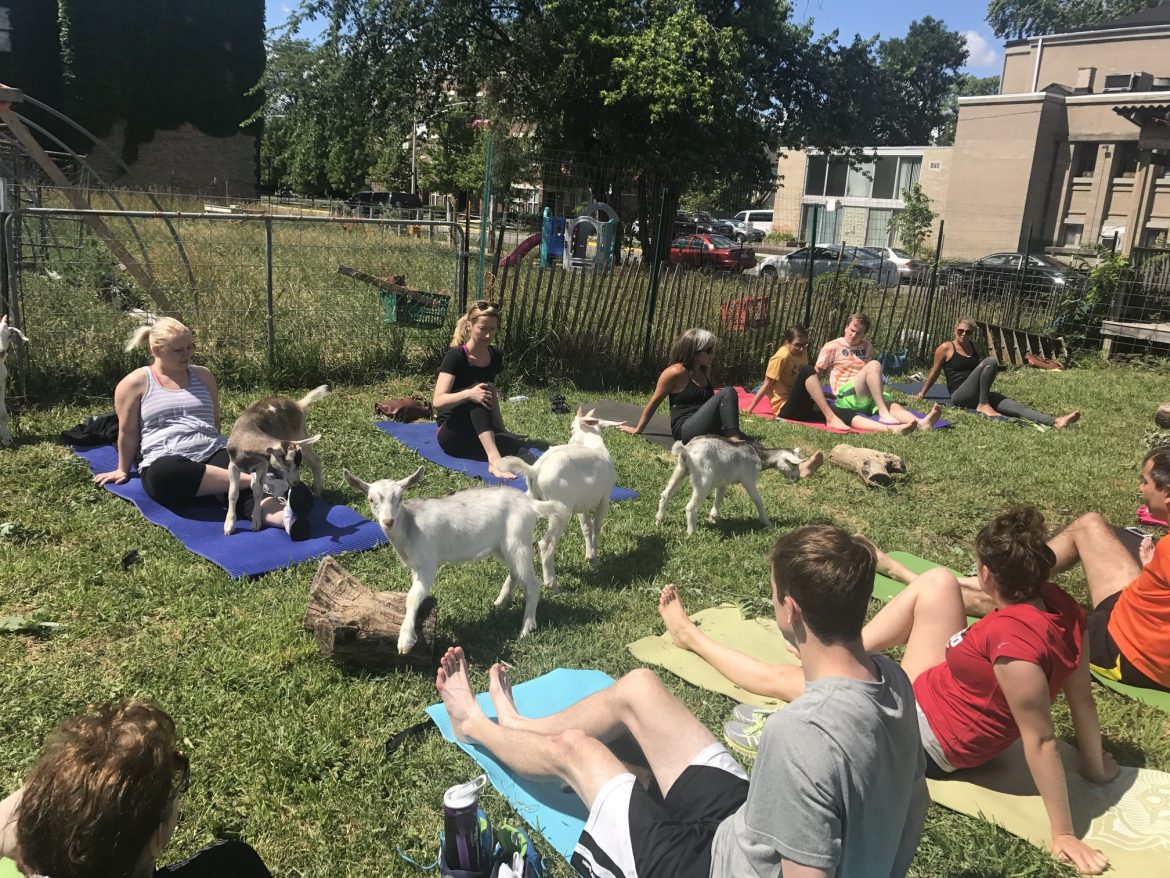 “We have Luna, Plato and Oreo,” she said. “And that’s Spinner and his sister Millie.”

It’s not just for people to hang out with animals, Ioder said; it’s also “a piece of the puzzle” in changing how many perceive the West Side.

“The West Side is unfortunately well known for many other things,” she said. But the attraction of doing yoga while being surrounded by baby goats in an open green space, now gives the area “a little edge.”

“[People will realize] the West Side is a fun, interesting place to be,” Ioder said. “It offers alternatives that you don’t find in other parts of the city.”

Most of the participants at the first session were Lissuzzo’s students. The experienced yoga instructor, who currently teaches at Ahimsa Studio in Oak Park, brought her students to the Austin pasture.

“She has the goats, and I have the yoga,” Lissuzzo said. “It’s a good combination. It’s a really beautiful, simple, accessible thing that she’s providing.”

“This is my first time to do yoga with goats and to be in this part of Chicago,” said Molly Rose Elkins-Ryan, 39, a Ukrainian Village resident and a frequent Green Line rider.

She came on her bike with friend Sarah Maxfield, 38, a student of Lissuzzo’s.

“It’s great to be in this neighborhood among the veggies, the goats, the blue sky and the sun,” said Elkins-Ryan, who works at Rush University Medical Center. “It’s amazing.”

Maxfield agreed, saying people’s perspectives are changing as they see a different side of Austin. 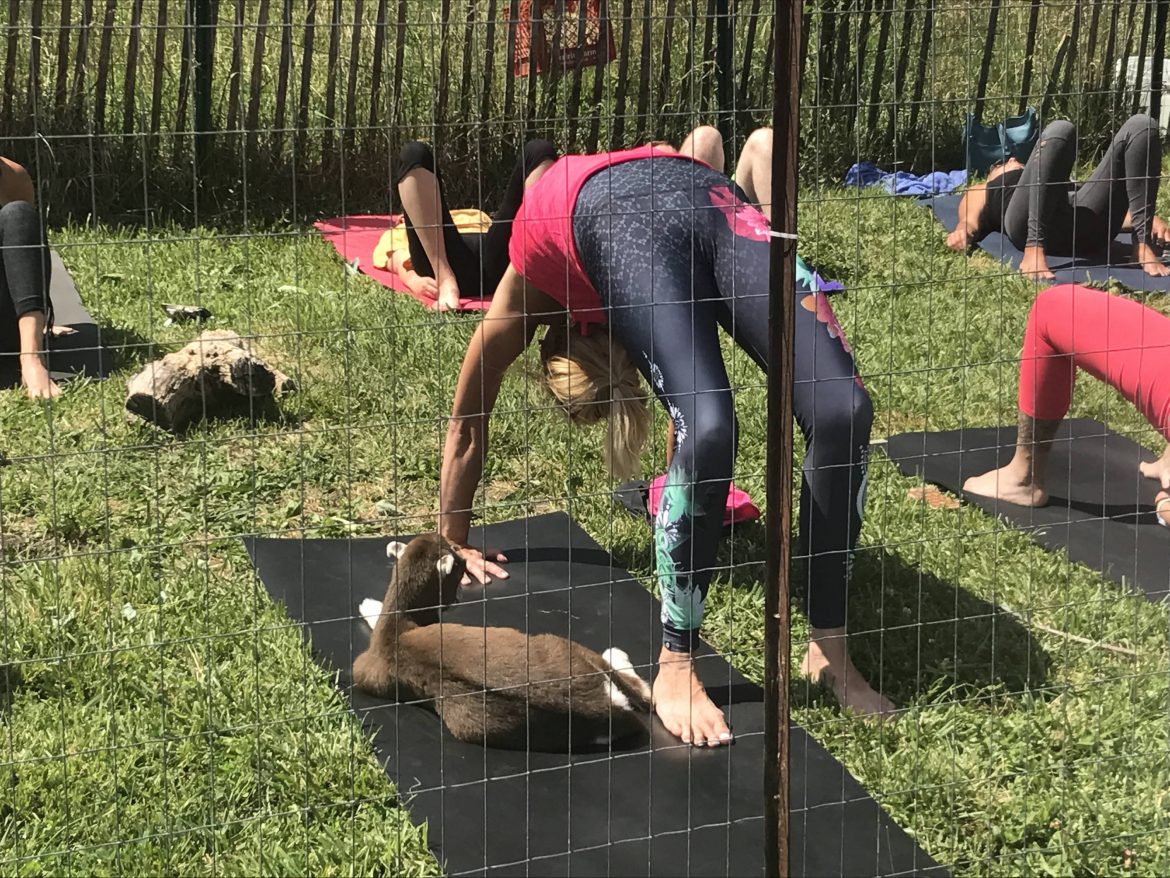 Bringing people from the other side of Austin Boulevard – and from other parts of the city – is essential, Ioder said, and the yoga goat class is just one of many activities organized on the West Side.

Over the past six years, the farm has reached out to a number of West Side businesses and organizations, forging connections that improved the pasture while bringing more family activities to the neighborhood.

Such efforts include recycling apple peels and egg shells coming from The Happy Apple Pie Shop in Oak Park, and inviting families to Austin from Sugar Beet Schoolhouse, a Forest Park business that teaches how to grow and cook food.

The progress is encouraging, Ioder said, but a lot of times parents still express concern about their children coming to Austin.

That’s what Amber Pike experienced while volunteering for Ioder last summer. The 26-year-old just started her second summer living on the farm, helping with the goats, yard and dairy products.

“People ask me ‘are you safe, is it OK you are over there?’”

But if you look around, she said, it’s like the rest of Chicago.

“It’s a real community full of real people,” she said. “And it’s not actually dangerous, and it’s not just one big slum.”

The pasture now has 17 goats in all, plus chickens and bees, said Ioder, who lives a block from the pasture, adding she’s never seen the level of assistance and consideration anywhere else she has operated. 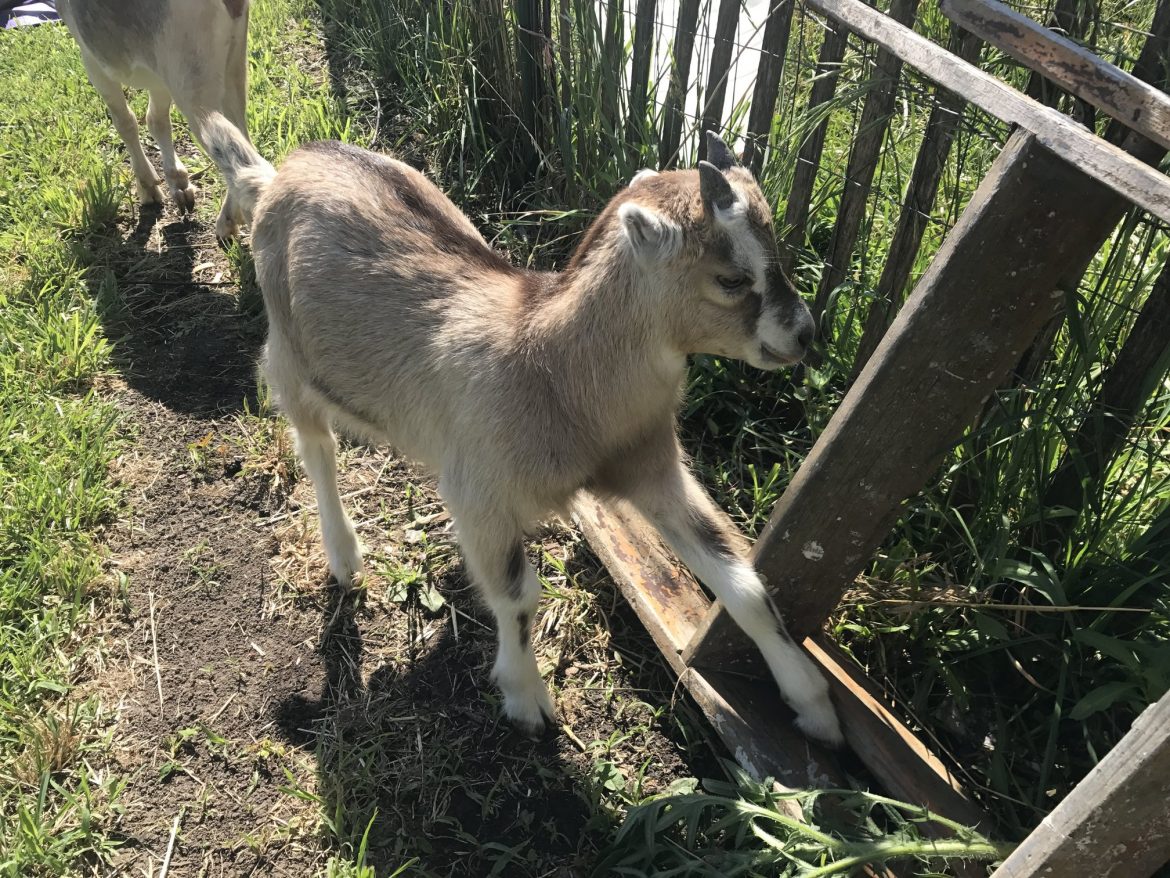 “They knock on our doors and tell us that the chickens are out or the goats (have) escaped,” she said, adding some neighbors have even run out in their pajamas to grab the animals and return them to the farm.

But there are challenges, Ioder said, the biggest right now being the lack of grazing space.

The pasture is overgrazed and needs at least a five-week rest for healthy circulation, she said, adding their contract with the Garfield Park Conservatory – the only place where they can herd the goats – just ended.

That’s why she’s working on a proposal to Ald. Chris Taliaferro (29th) to get access to a 400 f00t long, 40 foot wide space in Austin Park. The space, now covered by bushes, trees and sometimes filled with garbage, is not being used or maintained. That would be an ideal place to fence in the goats twice a year, she said, adding the plan will need community support.

“It’s open to everybody,” she said. “And it’s something we should hold on to.”