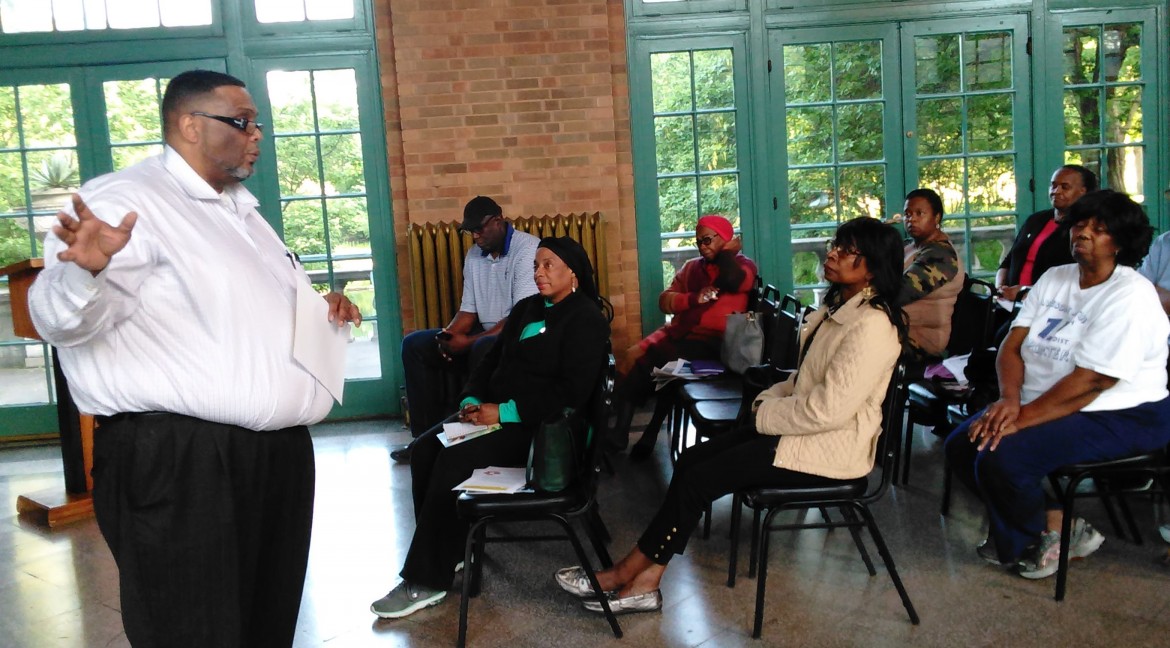 The effort to enroll at least 100 freshmen at Frederick Douglass Academy High School for the upcoming school year is underway, says the school’s principal.

There are no plans to close the building, but the school is working hard to meet Chicago Public Schools’ enrollment request – and then some, Principal Vanessa Dereef said.

Douglass has seen its enrollment shrink to roughly 150 students; the building’s capacity is just over a 1,000. Dereef said the school has some recruitment efforts in the works, including reaching out to the parents of elementary schoolchildren in the area.

“We’ve been charged by Chicago Public Schools to recruit 100 freshman to prove our viability and sustainability,” said Dereef, speaking at a community meeting held Wednesday at Columbus Park Refectory about how to attract more students.

An alumni picnic scheduled for later this month will look to attract new families and students, Dereef said. CPS students go back to school Sept. 5.

Without an influx of new students, Douglass’ future beyond 2018 remains uncertain. The five-year moratorium on closing schools that CPS put in place in 2013 ends next June.

Some 50 schools, including four in Austin, were shuttered in 2013. Douglass escaped that fate and has shown improvements since, said Dereef, who started as principal that same year.

The school’s quality performance rating – based on CPS’ three-tier grading system on such things as test scores and attendance – has gone from a Level 3 to a Level 2, with 3 being the lowest rating, Dereef said.

That progress, she said, included expanding class subjects and co-curricular activities for students, as well as improved training for staff in restorative justice and conflict resolution for students.

“We needed an instructional lift. We needed to raise our expectations and challenge our kids,” Dereef said.

Douglass, she added, is offering new subjects, such as a forensic science course, and expanding existing ones, such as computer science.

Residents at the meeting stressed that while the school is in danger of closing without new students, the school is open and ready to accept students this fall.

Taliaferro said the school’s recruitment push will be a citywide effort.

“There may be some requirements imposed by the city that Douglass needs to do to remain open; we have to talk about what we can do to make sure that happens,” the alderman said.

One possible complication in increasing Douglass’ enrollment is Noble Charter School’s planned expansion at one of its Austin schools, Taliaferro and others noted.

ITW David Speer Academy announced last spring its plan to expand its building – enrollment. The Belmont-Cragin charter school is located in the 37th Ward; Ald. Emma Mitts has not expressed support for the expansion.

In a statement given to Chicago Tonight, Mitts said such an expansion would “further deplete and redirect precious limited resources in an already inequitably-funded educational system.”

He said Noble officials have promised not to recruitment or enroll students from the 29th Ward. Still, Taliaferro said he opposes the expansion because it will create a ripple effect with enrollment at other schools.

The recently-approved school funding bill, which the General Assembly approved last week, is designed to help the state’s most struggling schools, Lilly said.

The bill would fund Illinois’ school districts – some 860 – based on how much money each needs to educate their respective students. Each district’s take from local property taxes, as well as money each is already getting from the state, will be part of the new funding formula.

The bill now awaits action from Gov. Bruce Rauner, who said he will veto the legislation, calling it a bail out for CPS.

Residents at Wednesday’s meeting were encouraged to call the governor’s office to voice their support of the legislation.