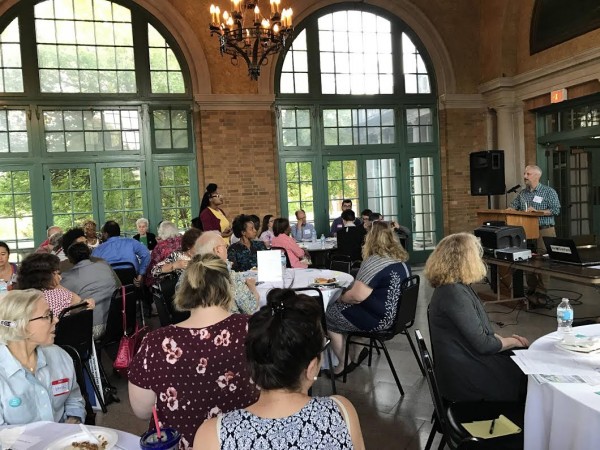 More than 150 people from Austin, Oak Park and across Chicago gathered Tuesday night at Columbus Park Refectory, exchanging ideas about racial integration and discussing the challenges faced by the two communities separated by Austin Boulevard.

This is the third year The Chicago Community Trust has organized the On The Table event in which about 5,800 “tables” participated throughout the Chicago area. Sixteen of those were in at Austin’s Columbus Park Refectory.

Community advocates and residents voiced their concerns over the longstanding inequity and exclusion on Chicago’s West Side, asking some hard-hitting questions that many avoid in their daily lives.

“You can see how we end up having a huge division of resources,” said Rob Breymaier, the event co-organizer who spoke at the start of the dinner long-existing segregation and its consequences on the area.

“Right now, we look at our two communities, we can see we have one community with thriving schools and the other where we are having challenges in schools. A more integrated society we want is where we don’t have those disparities.”

Breymaier, executive director of the Oak Park Regional Housing Center and a former president of the Chicago Area Fair Housing Alliance, said Tuesday night’s conversations between the two communities were intended to answer essential questions, such as how to “build one community” and “find our common destiny.”

Robyn Thurston, 56, lives in Oak Park but works in Austin as a healthcare administrator. Although she lives only three blocks away from Austin and has driven past Columbus Park many times, she said this was the first time she had entered the building.

“Almost 40 years, I never stopped in,” said Thuston, who moved to Oak Park from Kansas City in 1983. “I only rode my bike around the park one time. That’s because there’s a line between Austin and Oak Park.”

Austin Boulevard – the north-south street that separates the two communities – sets nearly everything in Austin apart from Oak Park, from infrastructure, schools and business to security and racial makeup.

Thuston said the street views changed dramatically as someone crosses into Austin from Oak Park.

“Whenever there’s traffic congestion or construction, I’d drive on Madison or Jackson. And as you leave Austin and enter Oak Park, it’s like from black and white to colors. That’s the contrast between the two communities.”

She said she’s seen instances of the Oak Park police indiscriminately pulling over vehicles traveling from Austin – an act so frequent that a neighbor of hers started to call it the “border patrol protecting” Oak Park.

What’s more, she said the lack of integration as well as the huge disparity between the two communities had caused trouble for residents and employees in both Austin and Oak Park as young people from both communities interact.

“One of my daughter’s boyfriends was shot here visiting a high school friend graduating from Austin High,” Thuston said, referring to a shooting that happened about 7 years ago in Austin.

She said young African Americans living in Oak Park are affected in ways their white peers are not.

“One of my church members, a Caucasian couple, adopted three black children,” she said. “Their son and his friends were just standing in front of the house that they grew up in and would be questioned by the police.”

She suspects this happened because they were seen as “black children on the wrong side of Austin Boulevard” even though they lived in Oak Park.

“That psychological barrier was very real,” Thuston said. “I feel like they will be safer in one community if this community (Austin) was safer. It really could realize its potential.” 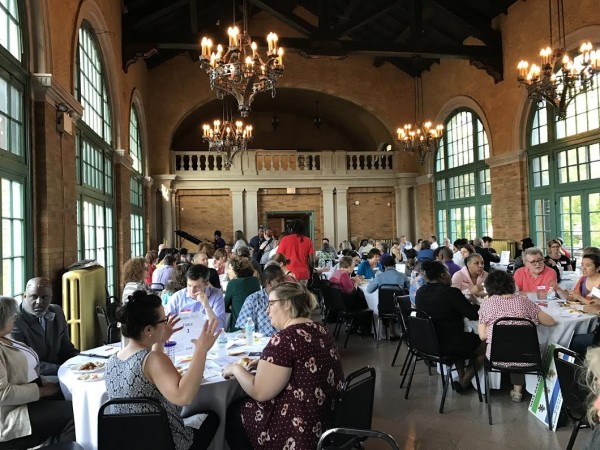 Willie Holman, 54, now on disability and retired, has lived in Austin for more than a decade. Holman agrees racial tensions still happen in both communities, saying it’s caused by a harmful policing system and too many unfinished or abandoned projects in Austin.

“You know where the crime is located,” he said. “But the officers who have racial problems are not going to serve the community but hurt the community. If you are not mentally ready and devoted to help people, it’s not going to work.”

Holman said another big problem is the chronic absence of economic development and ways to help people who moved into Austin after many of the city’s housing projects were torn down.

“They put certain things in certain areas,” he said. “If you tore down a parking, you just pass it to another community. It’s really like a jungle, every man for himself.”

“You got halfway houses. and you got mental facilities closed,” Holman. “There’s one closed right down the Central [Avenue]. And we also have a halfway house at the old YMCA. People are going to understand it’s like they are dumping people off in Austin.”

Holman suggested his own way of facilitating integration: “The biggest step is, when you see a black person or a white person coming to your neighborhood, say hi.

“Just say hi and don’t get mad if that person doesn’t speak because you are doing it from your real heart. And how can you judge a race if you don’t know the race?”

Olivia Weathers, the director of operations at Communities First Association, has worked in Austin for a year. The 24-year-old South Side resident offered another idea of how to improve Austin.

“I think that we should start changing the narrative of Austin, to look at how it’s extremely rich in resources,” Weathers said. “Now that I work in this community, I see a strong sense of pride. Tensions start to happen when you’re put in the situation of poverty.

“People in Austin kind of know what they need,” she said. “But there’s a lot of community work to be done.”

“Beautiful, old, historic housing is here in Austin,” she said. “Chicago is not taking advantage of the historical heritage of this community.”

The conversations that happened for a few hours Tuesday night are an effective way to facilitate understating and build relationships, participants said.

“It helps us to practice having those conversations with each other because it’s time to start having these conversations,” Thuston said. “We could not have had a better kick in the butt than what we had last November. We need to start talking to each other.”

Reesheda Graham Washington, another event co-organizer born and raised in Austin, said the lack of relationships, instead of resources, is the biggest problem facing the West Side.

People should work toward “neighbors knowing each other in ways that cause them to mobilize them in collaboration.

“We are having more candid conversations about the difficult topics that are a part of this world moving forward,” Washington said. “So we’ve moved past the polite phase. And the work continues after we leave the room.”