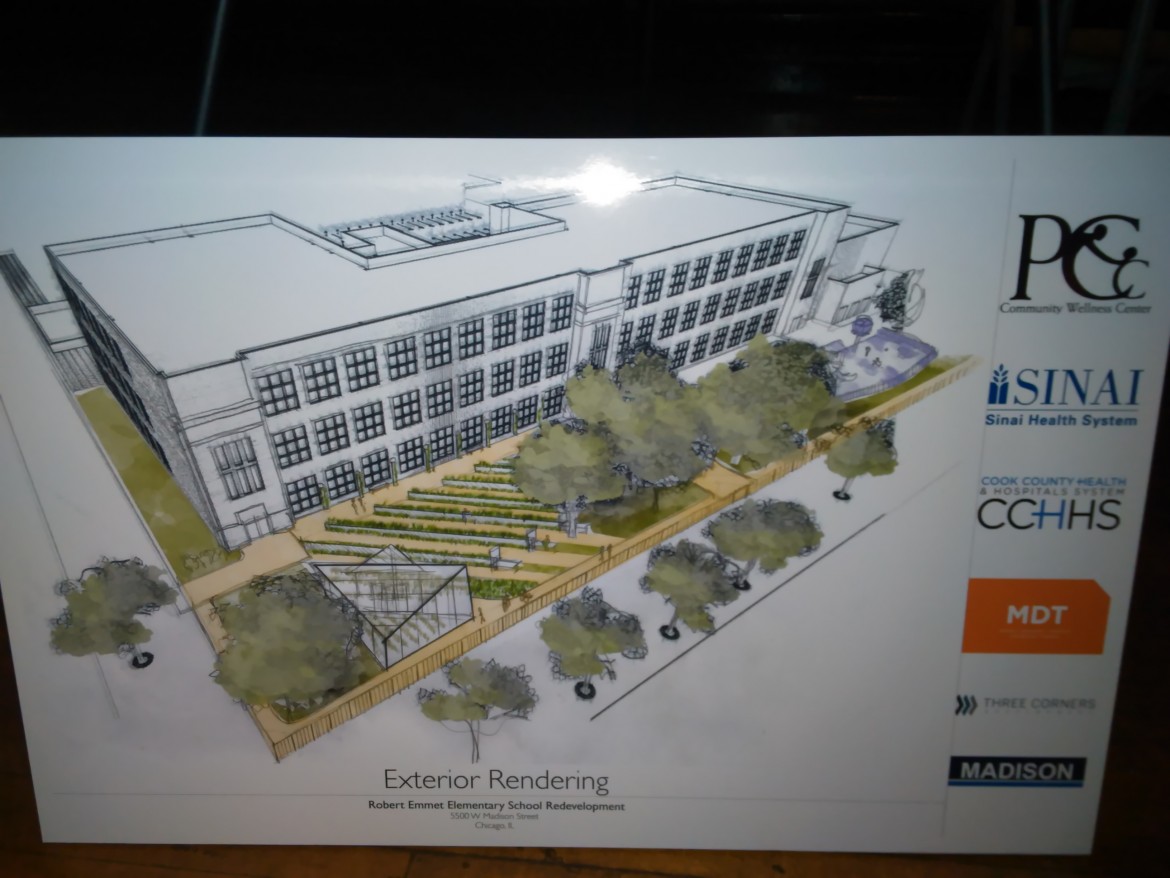 The shuttered Robert Emmet Elementary School in Austin could be converted into a community health care campus, as outlined in a proposal presented Tuesday at a town hall meeting.

Partnering groups backing the plan include Sinai Health System, the Cook County Health and Hospitals System, and PCC Community Wellness Centers. The proposed $20 million project would give new life to Emmet, one of 50 schools closed citywide by Chicago Public Schools in 2013.

The proposed health campus would include treatment centers for behavioral health, mammogram screenings and dental care. Fitness and senior space, as well as a day care and outdoor garden is also planned for the site. The campus would also house “community classrooms” providing training and education in various health care fields.

Some 60 residents, as well as representatives from the partnering groups, attended the meeting, which got off to a rocky start.

Many residents were initial skeptical, questioning if the health care campus was already a “done deal” without any community input.

“I’m trying to figure out how did we get from an empty space to renderings of an idea in the last 30 days,” said Phyllis Logan of the Westside Branch NAACP, adding that this project was “far beyond” what she expected to hear that night.

Taliaferro said the project was only being proposed and that no agreements or property bids have been finalized.

Residents also wanted to know who would pay for the project.

Robert Urso, president and CEO of PCC Wellness, said funding would be a “challenge” but hoped the partnering groups would help in the financing.

Residents also questioned whether the Emmet site at 5500 West Madison is available for other proposals, like a vocational center. Taliaferro said he’s received such proposals for Emmet and the shuttered Louis Armstrong Elementary building.

“We’re bringing every single proposed project forward to the community so that the community can have input and ask questions,” Taliaferro said, adding that projects from any other group would also be vetted by the community.

Residents warmed to the health care campus idea as the meeting went on, but many still had questions and suggestions.

Austin resident Marc Humphrey, who lives across the street from Emmet, is open to the idea but wants to know how it would impact the area.

“It sounds good, all the partnerships and what have you, but how will it affect the neighborhood?” he asked.

Residents also want the campus to partner with neighborhood groups, and they insisted that people who live in the community be hired there.

Urso said both will happen. Based in Oak Park, PCC Wellness has 12 community centers in the Chicago area, including its Austin center at 5425 W. Lake St. Urso said his agency hires directly from those communities.

“There is that opportunity to do that. We want this to be your community center,” he said.

Still, residents wanted assurances that the project is in the best interest of the community. Their initial skepticism, residents said, is based on past promises from similar projects that never bore out. The neighbors also want a thorough and transparent vetting process for every proposed project.

Amara Enyia, executive director of the Austin Chamber of Commerce, who attended the meeting, also stressed the need for transparency.

“That’s why process is so important,” Enyia said. “We need to make sure that whatever is being offered up is aligned with what the community wants.”

Taliaferro said a follow-up community meeting concerning the health campus will be scheduled.