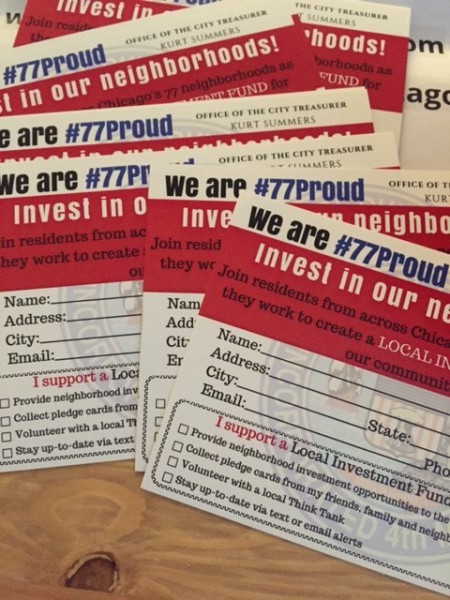 With community support, Chicago Treasurer Kurt Summers hopes to raise $100 million in capitalby 2017 to re-invest in the city’s 77 neighborhoods.

About 40 business owners and others – including Ald. Chris Taliaferro (29th), Ald. Michael Scott Jr. 24th, members of the Austin African American Business Networking Association – filled the events room at the Sankofa Cultural Arts and Business Center earlier this summer to hear the Chicago treasurer speak about his 77 Proud initiative.

During his first 90 days Summers visited all 77 of Chicago’s neighborhoods and looked at the needs, challenges and opportunity for investments. His conclusion: “There is a lack of access to capital in the neighborhoods.”

Summers said the first step is to find support by having Chicagoans complete a “77 Proud” pledge card.

On one side, residents are asked to provide their residential information and check one of four boxes pledging either to provide neighborhood investment opportunities, collect pledge cards, volunteer or stay up-to-date with the initiative.

On the other side, residents are instructed to write down ideas or investment opportunities like grocery stores, small business or restaurants they believe are vital to their neighborhood.

The treasurer said collecting 10,000 completing pledge cards would show support for the initiative and help determine if “77 Proud” is something the neighborhoods want.

Anyone can complete the form: “You don’t have to be 18, have a driver’s license or voter card; all you have to do is live in the neighborhood.”

At the Austin meeting, an audience member asked whether the “77 Proud” initiative will be a loan-based program or one that provides free capital to neighborhood projects.

“It will be a combination of debt, mezzanine financing and equity,” Summers said.

When asked about the governing body that would be selecting the projects to receive funding, the treasurer declined to comment, only saying no government employees would be involved.

The treasurer said he would lead the efforts to raise the required capital and use that money to attract investors. But Summers said in order to do that, residents must provide good ideas and establish a pipeline of investment opportunities.

“We are looking for those who are ready to start their first or second restaurant, those ready to be a franchise owner,” he said.

Ald. Taliaferro said the Chicago City Council recently passed the neighborhood opportunity fund and asked whether the two initiatives should remain separate or work together.

Summers said both initiatives should remain separate but work together where possible, stressing the fact that “77 Proud” should steer clear of any government control.

The treasurer provided no timeline to be implemented.

“First and foremost, we have to make sure this is what the community wants,” he said.